Make money with social media – that’s what Cashload.net claims to be able to help you do, but is it really true? 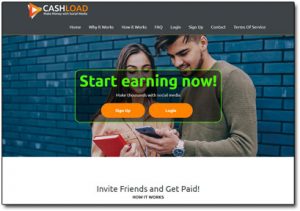 There have been an awful lot of Cashload complaints surfacing & many of the members are claiming that they haven’t been paid any of the money they’ve earned… So is it legit, or is Cashload.net a scam to avoid?

The good news is that you’ve landed in exactly the right place to find out because in this Cashload review I’m going to be uncovering the REAL truth about how it all works & why you won’t want to join.

Cashload claims to provide people with a super-easy way to make lots of money from social media. All you have to do (allegedly) is sign up, share your link & earn…

But is it actually true? Will you actually get paid for such easy work? And if it is true then why isn’t everybody doing it, why are people still working jobs?

Well the short truth is that NO – it is not true, and I can say that so confidently because I have already exposed this exact same scam several times before right here on this blog. It just keeps changing its name.

Some of the previous names it’s launched under include Paid4Clout, Eazy Dollars & Cash For Kids Club. They should all be avoided!

The person behind the scam simply keeps changing the name of it in an attempt to escape the negative reviews that surface about it (like this one here) so that he can continue tricking people into signing up.

Sadly though those that do sign up won’t ever get paid & instead they’ll just see themselves joining a dangerous scam that could put them at serious risk.

So as I mentioned in the previous section of this review the concept is that you sign up, refer others & earn when they sign up – or even when they just click on the link. It sounds simple & they make it sound profitable…

However it is all lies. Cashload does NOT pay out any money to its members & instead the whole “referral” thing is just a ploy to get you to unknowingly participate in recruiting others into their data harvesting scam.

You see the real reason Cashload.net exists is to to gather as much data from people as possible. They’re basically getting people to sign up, getting their username/email/passwords & then trying to find other accounts associated with those details that they can break into.

But what’s worse is that they’re then tricking you into actually participating in their scam & recruiting others so that they can get data from them too.

This means it’s absolutely vital that you DO NOT share any Cashload.net links – and also if you’ve already signed up to Cashload.net using details you use elsewhere then you make sure you change your passwords immediately.

And if they can’t find any details associated with your username/email then do not think you’ve dodged it because from there they will simply sell on your data to 3rd party companies for marketing purposes… So you’ll find yourself bombarded with spam.

Basically nothing good at all will come out of signing up to Cashload so don’t do it – steer clear of it instead.

One of the main things I’ve seen being complained about with regards to Cashload is withdrawal problems, and the reason for that is because Cashload.net is a scam, they actually fake peoples earnings to trick them into referring people…

However people are only left to find out the hard way that the earnings are fake when they come to try to withdraw them & that’s why Cashload have set their withdrawal limit so ridiculously high.

Instead of actually paying you the money that you’ve allegedly earned what they’ll do instead is claim that they detected some “click fraud” associated with your account & that as a result your earnings have been voided… Meaning you won’t get them paid.

So it might seem like an easy way to make money but all Cashload will really do is see you wasting your time.

If you’re new to making money online then the Cashload.net website may appear to be legitimate, but for me – somebody with a bit of experience – it is easy to see that the website is absolutely full of red-flags & lies.

For example firstly the opportunity just sounds WAY too good to be true – and if something sounds too good to be true then it usually is. There is no way any company or website could pay so much for referrals if the members are signing up for free… Hands down.

On top of that though the Cashload website claims to have 233,000 members & to have paid out 9.3 million USD to its members, however according to a domain WHOIS lookup the website is under 2 months old (as shown below):

Clearly therefore those statistics are lies (especially since Cashload also claims to have been active for 3+ years)… And what legitimate business would need to fake their statistics in such a way?

That’s not all though, they’re even using a fake office address too. 176 Westmore, Mondaile Street, Victorian 887 NYC doesn’t exist, as shown below:

So it’s pretty safe to say from those things alone that the Cashload.net website is quite clearly NOT legit, which brings me onto:

Yes 100%, Cashload is definitely a scam. None of the members will ever get paid and the only reason it has been setup is so that the creators can steal peoples data to either break into their accounts or sell it for profit.

The whole thing is a complete waste of time & should be avoided at all costs. The fact that it has already been launched under several different names such as Eazy Dollars & Paid4Clout just highlight how much of a con it is.

Instead if you really want to make good money online I suggest you check out the legitimate methods on my top picks page.

Or if you’re interested in learning how to build a full-time income online then you may want to check out the same method I use which is called affiliate marketing. It basically involves you connecting people with the products they’re looking for & getting paid commissions in return.

The best part is that you can get started for free with it over at Commission Academy.

Whatever you decide to do though I just hope that my review of Cashload.net here has helped you to discover the truth & more importantly I hope that it has helped you to avoid it. If you still have any further questions or comments though then don’t hesitate to leave them below. 🙂

2 thoughts on “Cashload.net Review – Did You Get Paid? Complaints From Members Say It’s a Scam!”