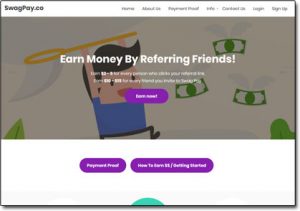 You’ve probably heard of SwagBucks (the legitimate site for earning a little extra each month online), but what about SwagPay? This is a brand new site that’s just launched promising to pay people hundreds of dollars per day in returning for simply referring their friends or completing small tasks…

But can you really make money so easily online & if you can, then why isn’t everybody doing it? Or is SwagPay just a scam that’s trying to leverage the reputable name of SwagBucks in an attempt to lure you in?

Well thankfully you’ve landed in the right place to find out because the first thing I can tell you is that SwagPay is certainly NOT what it seems, and I can also tell you that none of the members will end up getting paid.

The truth is that SwagPay is NOT legitimate like SwagBucks & instead it’s actually a dangerous con… I’ll be revealing the full truth about it right here in this review.

SwagPay is a newly launched website that claims it can enable you to earn hundreds of dollars per day online with ease. It makes out like it’s all really simple & that you don’t need any experience to get started.

You’re led to believe that you can simply sign up, share your link & begin earning commissions by referring friends. Plus on top of that you’re also told you can complete small tasks to boost your earnings as well.

Sounds good, right? And SwagPay even claims that you can make $500 to $1,000 the very same day you get started.

But if all that’s true then why isn’t everybody using SwagPay? Why are people still working jobs if they can just spend a few minutes each day referring friends to SwagPay & earning hundreds of dollars in return?

Sounds a bit suspicious, doesn’t it? And that’s because it is…

What I can tell you here right from the off is that SwagPay is actually nothing but a scam & despite it’s name nobody will ever actually be getting paid. They’ll just see themselves wasting their time & getting nothing in return.

The reason I can say that so confidently is because I’ve already exposed this same scam numerous times before under various different names such as;

The creator (or should I say scammer) behind it all just keeps changing the name of it in an attempt to escape the negative reviews (like mine here) so that he can continue tricking people into signing up.

Sadly though the unsuspecting victims who do actually sign up will find themselves part of a dangerous scam that could potentially see several of their accounts ending up getting comprised. Keep reading and I’ll explain how all that works below…

So basically the “theory” is that SwagPay get paid from advertisers who advertise on their website, then they pass some of that money down to you in return for you helping them to get more visitors to their website…

However what I can tell you is that that’s a complete lie.

But aside from that SwagPay also offer ridiculously high commissions – commissions so high that they would be entirely unsustainable. There is hands down no way a website could afford to pay out so much money for such simple tasks.

Sites like SwagBucks (the legitimate ones) typically pay only around a dollar or less per completed task – and that’s literally about as much as they can afford to pay… SwagPay however are just faking their payouts in order to trick you into signing up.

But why would they want to do that? What are they getting out of it?

Well the reality is that SwagPay is actually just what’s known as a data-harvesting scam.

This basically means that they’re trying to get as much data from people as possible. They want email addresses, usernames, passwords etc from as many people as possible… And they’re also tricking their members into helping them to get them (by pretending to pay them money for referrals).

But why do they want all of this data? What will they be doing with it?

Basically it seems their goal is to either attempt to break into any accounts associated with the data (such as PayPal accounts, social accounts etc) or to sell it onto dodgy third party marketing companies in return for a profit.

It looks like they’re simply hoping that people sign up to the SwagPay scam with the same details that they use on other websites – so they’ll then attempt to find other accounts associated with your details & break into them.

And obviously this means that if you have indeed already signed up to SwagPay & you did so using the same details that you use elsewhere then you should definitely go & change your credentials ASAP.

For those who are still thinking about “trying SwagPay out” despite what I’ve said though, let’s take a look at…

The Red-Flags That Scream “Scam!”

I mean come on think about it, if SwagPay really worked then nobody would be left working a job – everybody would be earning hundreds of dollars per day from their home & the world would just be in crisis.

For one, there’s the statistics. SwagPay claims to have over 722k members, to have paid out over $10 million USD & to have been in business for 7 years… But none of those claims are true.

How do I know that? Well I looked up the domain “swagpay.co” using a WHOIS search & found that the website was only registered a mere 39 days ago as shown below:

Then there’s the fact that SwagPay give absolutely no contact details away whatsoever. No email, no number & no office address. What legitimate company turning over $10+ million would hide their office address? None!

However I think the biggest red-flag of all is the fact that “payment proof” page actually contains no payment proof whatsoever. Instead it just consists of photoshopped images in which people claim to have made hundreds & thousands…

The “proof” on that page is absolutely not verifiable & therefore should just be taken with a pinch of salt. The person behind the SwagPay website has purposely erased the names so that you cannot verify any of the statements & that is a huge red-flag, which brings me onto…

Yes, SwagPay is definitely a scam there’s no doubt about that. If you join up to SwagPay then you will just find yourself wasting your time & you will never get paid regardless as to how many referrals you bring in.

Once they’ve got your data the people behind SwagPay will then either try to break into any accounts associated with your details or they will simply sell them on to dodgy marketing companies who will send you bucket-loads of spam.

So with that being said if you have already signed up to SwagPay prior to reading this review & you did so with the same details that you use elsewhere then you should definitely go & change them ASAP.

And if you haven’t already signed up to SwagPay then don’t, because it’s nothing but bad news.

If you’re still looking for ways to make money though then don’t worry all is not lost because even though SwagPay itself is a scam there are still many legitimate alternative ways you can make money.

You can check out my number 1 recommendation (Wealthy Affiliate) right here. It’s there that you’ll learn how to build a real income online (one that you could potentially do full-time) and you can even get started there for free.

But whatever you decide to do I just sincerely hope that my review here has given you a good insight into how SwagPay really works & I hope that it has helped you to avoid it rather than end up wasting your time. Feel free to leave any comments below. 🙂