InfluEarn (found at influearn.com) calls itself a “one of a kind social earning network” and it promises to provide its members with an easy way to earn lots of money online by completing small tasks or referring friends… 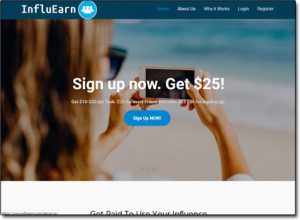 They even claim to offer new members a whopping $25 welcome bonus just for signing up… But is it actually legit? Or is InfluEarn a scam that’ll just see you wasting your time & getting paid nothing in return?

Thankfully you’ve landed in the right place to find out because I can tell you right from the off that InfluEarn is NOT what it seems & in this honest review I’ll be uncovering the real truth about it, including the hidden dangers & information about what you need to do if you’ve already signed up. 🙂

InfluEarn calls itself a “social earning network” & it promises to provide people with an easy way to make hundreds of dollars online – all by either completing what they call “small tasks” or by referring friends.

$25 just for creating a free account? And $20 for every person you refer? How can they afford to pay out all of that money if everybody’s just creating free accounts? How are they making their money?

And if it’s legit, then why isn’t everybody doing this? Why are people still working jobs if you can make money so easily through InfluEarn?

In short the answer is because it’s NOT legit. I can tell you right from the off that InfluEarn is actually nothing but a scam & the reason that I can say that so confidently is because I’ve seen this same scam many times before.

It’s previously been launched under the names ViralWork, UrbansurMoney & Cashooga just to name a few. The scammers behind it simply keep on changing the name & appearance a little in an attempt to escape the negative reviews & complaints so that they can continue luring unsuspecting victims in.

But I know what you’re likely thinking – if it’s free, then how can it be a scam? Well InfluEarn is actually a very cunning scam & if you have already signed up then you could be at risk, so keep on reading as I’ll explain exactly how it all works below (and what you can do to protect yourself if you’ve already joined)…

So InfluEarn portrays itself as a legitimate platform through which you can complete tasks & refer friends to earn money, but the truth is that whole thing is actually just what’s known as a data-harvesting scam.

In short this means that nobody who uses the site will end up getting paid… The whole thing is just a trick to get people to sign up & then to get them to lure others in & basically do the scammers dirty work for them.

You see all the creators of InfluEarn are really interested in is collecting user data – the data that you enter when you sign up. They’re basically just hoping that the username/email/password combination you use to register is the same one you use on other sites.

It’s a fact that most people use the same login credentials on all of the websites you visit.

So if you were to sign up to InfluEarn then the scammers behind it would ultimately end up trying to find any accounts associated with the details you entered & then they’d try to break into them.

This could include social media accounts, PayPal accounts & even bank accounts…

Therefore if you have indeed already joined InfluEarn & you joined using the same details that you use elsewhere then I’d highly recommend that you go & change those details as soon as possible.

But even if you didn’t enter the same details you still won’t get away scot-free because the people behind the InfluEarn scam will simply end up selling your data onto other scammers who’ll no doubt bombard you with spam mail.

Either way joining InfluEarn is a lose-lose situation, nothing good will come of it, so if you haven’t already joined – don’t.

As a result many people who join InfluEarn end up thinking that it might actually be working, as they’re seeing the money increase… But there is no money – the numbers are faked, and you will never be able to withdraw any of that cash.

That’s why they’ve set their withdrawal limit so ridiculously high – so that you’re forced to refer a whole bunch of people before you end up managing to find out (the hard way) that it’s actually a scam.

When it comes to withdrawal time they’ll simply either ignore your withdrawal request or deny it claiming that you made “fraudulent clicks” or something. Trust me, it’s not worth wasting your time.

But I do appreciate that often the promise of easy money can be difficult to turn down (especially if you’re in a difficult situation) and as a result you may still be thinking about “trying it out”, even despite what I’ve said… So for that reason…

First off, the fact alone that this thing has launched under so many different names should 100% highlight to you that it’s clearly a scam. Some of those names include Cashooga, UrbansurMoney, RooLoot, Viral Bucks, Viral Dollars… The list goes on & on…

If you check out my reviews of any of those programs you’ll see that they’re identical to InfluEarn (they’ve just changed the name) and if you search for information on them you’ll find complaint after complaint about people not getting paid.

As I said earlier, they’ve just changed the name so that they can run the scam once again & soon enough InfluEarn will disappear & once again it’ll appear under yet another name, luring yet more victims.

But on top of that there is more proof that it is a scam. Take the statistics on the InfluEarn website for example, they claim that it has been in business for 2+ years & that it has paid out over 122 million dollars in earnings… But a quick lookup on the domain (as shown below) shows that the website is actually only 6 days old at the time of writing this review:

If the website truly worked as promised then there’s simply no way they’d need to make up those lies, and there’s no way that you should trust a website that makes up such lies because if they could lie about that then they could (and likely would) lie about anything.

Furthermore to that though, InfluEarn mentions on its “About Us” page that the website is part of a company named InfluEarn LLC headquartered out New York, but the company InfluEarn LLC doesn’t exist… It’s just yet another lie.

Yes absolutely, there’s no doubt about it – InfluEarn is definitely a scam & none of the members that participate in promoting it will ever get paid. Instead by registering they will just be putting their data at risk, so I would highly advise avoiding it completely.

As I say I’ve already exposed this scam many times before as it keeps launching under various different names, then disappearing & then coming back under another name so that it can keep luring more & more people in. InfluEarn is just the latest version, but the scam at the heart of it remains exactly the same.

The truth is that there are actually legitimate websites through which you can earn money by completing small tasks & by referring friends, but because this kind of work is so easy these types of websites don’t really pay out a great deal of money. Usually you’d be lucky to earn as much as $1 or $2 per day with them…

Affiliate marketing is the exact same way I make most of my own money online & I’d highly recommend it – plus the best part is that you can actually get started with it for free over at Wealthy Affiliate.

Or alternatively you can check out all of these other ways to make money too.

But whatever you decide to do I just hope that my review here has given you a good insight into how InfluEarn actually works & more importantly I hope it has helped you to avoid falling victim to it. If you do still happen to have any further questions or comments about it though then don’t hesitate to leave them below & as always I’ll get back to you as soon as possible. 🙂

8 thoughts on “InfluEarn – Scam or Legit? My Review Uncovers That Nobody Gets Paid!”