ViralWork is a brand new website (located at viralwork.co) that promises to provide people with a super easy way to earn money online, even if they have no experience & even if they have absolutely no technical knowledge whatsoever… 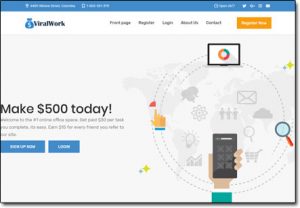 The site claims that all you need to do is complete tasks or share links to make money , and it even promises that you’ll be able to earn $500 the very same day that you get started… But is it really legit? Or is ViralWork a scam that’ll just result in you getting conned instead?

Well thankfully you’ve landed in exactly the right place to find out as I’ve personally taken a closer look into it & in this honest review I’ll be uncovering the REAL truth about how it all works, along with the reasons why members of ViralWork aren’t getting paid & information on what you need to do if you’ve already signed up.

You’re led to believe that as a member of ViralWork you’ll be able to earn over $500 per day by simply completing “small tasks” and referring friends, and they even claim to give you $25 just for signing up…

But if you can really make all of this money so easily then why isn’t everybody doing it?

And if everybody’s joining ViralWork for free then where is this money coming from? How can ViralWork afford to pay their members?

Well the truth is (as you probably already suspect) the ViralWork website is actually just a scam website, and the reason I can say that so confidently is because I’ve seen this exact same scam many times before.

It’s previously launched under the following names & it made the exact same promises:

Sadly though despite its bold promises none of the members ever get paid. The whole thing is just a trick – they’re basically just pretending to pay to get you to sign up & to trick you into getting others to do to the same.

The reason they want you to do that is because they’re actually harvesting data, which means it’s a pretty darn dangerous scam & if you’ve already signed up then I strongly recommend you keep reading to see what you need to do to protect yourself as I explain exactly how it all works below…

So basically as I briefly touched on above, the ViralWork website is just a ploy to get people to sign up & then to get them to promote it to others, because the whole thing has been built for the creators (aka the scammers) behind it to collect data.

It’s a fact that most people use the same login credentials for nearly all of the websites they visit.

So what they’ll then try & do is break into any accounts associated with your details, which could include social media accounts, PayPal accounts, even your bank accounts… And if they can’t break into them they’ll simply sell your details onto other scammers who’ll likely bombard you with spam.

The whole thing’s bad news & it’s clearly best avoided, but if you’ve already signed up then I’d strongly recommend you change your login credentials on the other websites if you did indeed happen to sign up to ViralWork with the same ones.

Plus if you already shared ViralWork then I’d strongly recommend you share my post here exposing it, otherwise if people sign up to it & get scammed you could be liable (since you were the one that shared it).

The creators of the ViralWork scam have really gone out of their way to try & make the scam seem legitimate. One of the ways they’ve done this is by making the users account balance increase accordingly with the tasks they complete/referrals they generate.

This seems to have convinced many people, as they must assume that because their account balance is increasing they are actually earning money… But they’re not, there is no money & the numbers are simply fake.

Sadly though people are only left to discover this the hard way when it comes to withdrawal time (that’s why they’ve set the withdrawal limit so high). When a member makes a withdrawal it’ll either get ignored or blocked for “fraud”.

Upon submitting a withdrawal request ViralWork will claim that you cheated & gained the clicks or referrals from your link via “dodgy” disallowed methods, which simply isn’t true… It’s just their way of getting out of paying you any money.

Then when enough people begin realizing it’s a scam & stop joining, they’ll simply close it down & start it up under a new name. That’s why as I mentioned at the start of this review it’s already been launched under so many different names.

I mean don’t get me wrong there are indeed legitimate get-paid-websites which pay you for completing tasks & referring friends, however because the tasks are so easy (and there are so many people willing to do them) these types of sites generally pay out very little.

So if you come across a site like ViralWork that sounds too good to be true, then as the saying goes – it probably is. I mean think about it – why would they need to pay $15 for every referral? That’s a crazy amount of money & there are many people in the world who would refer people even just for a dollar (or even less!).

The reason they’re offering the crazy-high amount of $15 is because they’re just trying to lure people into their scam. They know that by offering such a high amount you’ll likely just “try it out” even though you might actually think it’s a scam.

Rather than trying it out though & ending up falling victim, check out my proof that it’s a scam below…

Firstly there is the fact that (as shown below) ViralWork claims to have over 4 million members & claims to have paid out over 800 million dollars in earnings to all of these members:

But that’s complete rubbish because a quick lookup on the ViralWork domain name reveals that the website has actually only been active for a mere 34 days at the time of writing this review (as shown below):

That alone is of course a MAJOR red-flag, but the problems don’t end there. Their company headquarters is listed on their website as being located at “4459 Hillview Street, Columbia” & their phone number is listed as “1-803-556-3111“…

However a quick search revealed that the address is just the default made-up address that companies with the website template that they’ve used, as the same address is shown on several identical sites as shown below: 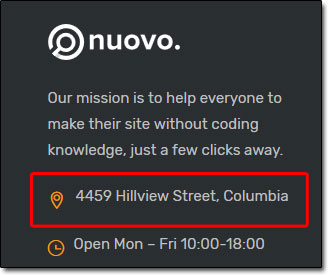 And on top of all that, despite the website only being active for 34 days so far, there are already many negative scam reviews surfacing about it such as the one that I have screenshotted below from TrustPilot:

Yes it is, there’s no doubt about it. The whole thing is just a trick & none of the members will ever find themselves getting paid, instead they’ll just be wasting their time whilst the scammers behind ViralWork make money at their expense.

But if you haven’t already signed up to ViralWork then it comes without saying – don’t. The whole thing is nothing but bad news & there is no need to risk joining because there are many alternative legitimate ways to make good money online.

And if you are indeed still interested in making good money online then I recommend you check out Wealthy Affiliate as that’s where you’ll get access to free step-by-step training on exactly how to do just that.

But whatever you decide to do I just hope that my review of ViralWork here has given you a good insight into how it truly works & hopefully it has helped you to avoid getting caught out by it. If you do still happen to have any further questions or comments about it though then don’t hesitate to leave them below & as always I’ll do my best to get back to you as quickly as possible. 🙂