Viral Bucks (found at ViralBucks.co) is a website that promises to provide people with the ability to earn “big money” just by sharing links on social media, and it even promises that they can earn a whopping $500 the very same day that they get started… 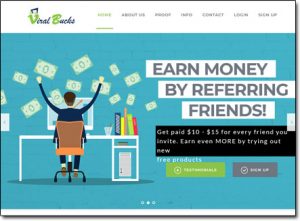 But can you really make money so easily with Viral Bucks? And do they actually pay their members? Or is Viral Bucks a scam that’ll just see you wasting your time & getting nothing back in return?

Well thankfully you’ve landed in the right place to find out as I myself have personally taken a closer look into it & in this honest review I’ll be uncovering the REAL truth about how it all works, including the hidden dangers (and what you need to do to protect yourself if you’ve already signed up)…

What Is Viral Bucks?

But with Viral Bucks claiming to pay a whopping $10 per referral, where is this money coming from?

Well the simple answer is that they can’t afford to do that – and sadly the truth is that the whole thing is fake. The Viral Bucks website is actually just a front for an extremely dangerous data-harvesting scam, and they’re tricking their members (aka potentially you) into luring people into it.

So when you’re “referring others for money”, all you’re really doing is luring other people into the scam… And then when it comes to withdrawal time you’ll simply be left to find out the hard way that you never get paid… Because it’s not legit.

But I know what you’re probably wondering… How exactly does the scam work? And how are they profiting from it? Well as I mentioned above the scam itself is actually extremely dangerous so if you have already signed up (or referred others) then you must keep on reading as I explain how it all works below, and what you need to do to protect yourself & to protect the others you’ve referred…

How Does Viral Bucks Work?

On the surface the Viral Bucks website appears completely harmless, which is likely why so many people have been drawn in by it. You’re led to believe it’s free & that all you need to do to make money is share your link… What could be the harm?

Well what they don’t tell you is that their real intention is to simply gather as much user data as possible, which they will then use to try & break into accounts – such as social media accounts, financial accounts etc.

So if you have signed up to Viral Bucks you could find yourself being the victim of identity fraud, or having money stolen from your accounts, or having your data being sold onto third-parties & getting sent tons of spam.

But how do they get into your accounts?

The truth is that most people actually use the same password for all of their logins… Which is what they’re preying on.

So if you did happen to sign up to Viral Bucks with the same details that you use on other sites then you must go to those sites and change them ASAP, otherwise the scammers behind Viral Bucks will begin looking for accounts associated with your details & attempt to login.

It might be just your Facebook or Instagram that they break into, which is still bad, but it could be even worse – it could be your bank or PayPal.

Can You Actually Make Money With Viral Bucks?

Strangely, even despite me warning people of the dangers of sites like Viral Bucks, I have still had people asking me if they can make money by promoting it – and the answer to that question is no, there is no money to be made.

Basically Viral Bucks (and the other scams like it) are just lying about their money-making opportunity in an attempt to trick you into sharing their link & getting others to sign up to their site… They’re basically using you to do their dirty work.

But admittedly they’ve made it pretty convincing, because they’ve actually gone to the lengths of creating an “earnings panel”, and your earnings do actually increase accordingly with each referral, making you believe that you’re actually making money…

However the scam is only revealed upon withdrawal time, because whilst you appear to be making money, none of it will ever get paid to you because there isn’t really any money there… They were just faking the numbers to trick you.

I appreciate that “just share a link and earn $10” seems like a pretty good opportunity, so much so that even despite all of what I’ve said above you may still be thinking about trying it out… Therefore I want to show you solid proof that it doesn’t work.

The first bit of proof that it doesn’t work is the fact that the scam keeps closing down & re-launching under different names. I’ve actually exposed this exact same scam over 10 times on this blog now, and some of its other previous names include Viral Dollars, Notion Cash & Viral Pay.

It simply keeps changing its name in an attempt to escape the negative reviews (like mine here) so that the creators can continue trying to trick people into signing up to it & promoting it.

The second bit of proof is that the actual Viral Bucks proof page is fake too. It shows member “testimonials” & the members claim to have made lots of money through Viral Bucks, but as shown below they are not really members at all – they are paid actors from Fiverr:

If the Viral Bucks website really enabled people to earn money so easily then I’m pretty darn sure that they wouldn’t need to hire paid actors to create fake testimonials & then use it as fake proof on their website… Clearly that alone highlights what a con it is.

And then there’s the fact that they claim to have paid out over $52 million to their members, yet according to a domain WHOIS search the website is only 12 days old (as shown below) LOL: 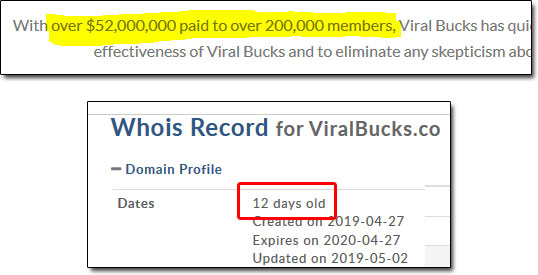 So fake! Which brings me right onto…

Is Viral Bucks a Scam?

Yes it is, there’s absolutely no doubt about it – Viral Bucks is a dangerous data-harvesting scam that should be avoided at absolutely all costs, and if you have already signed up then I urge you to take the action I mentioned earlier in this review to protect your accounts from being compromised.

Furthermore if you have already referred others into Viral Bucks then I also urge you to share this Viral Bucks review with them as well so that they too can learn the truth & find out how to protect their accounts.

Like I said earlier, this is not the first time I’ve seen this scam – it simply keeps relaunching under different names in an attempt to continue tricking people into signing up for it. This means I’m sure we’ll likely see it again, so you should remain vigilant… If something sounds too good to be true, it probably is.

But if you are still looking for a way to make money online (a legitimate one) then you should definitely check out my top picks page which is where I’ve listed all of my top recommendations for earning online.

And if you’re just looking to skip straight to my all-time top method then be sure to check out Commission Academy, as that’s where you’ll learn how to build a real income online – an income that could potentially see you working online full-time.

Whatever you decide to do though I just sincerely hope that my Viral Bucks review here has given you a good insight into how it really works & more importantly I hope it has helped you to avoid it. If you do still happen to have any further questions or comments about it though then don’t hesitate to leave them below & as always I’ll get back to you as soon as I can. 🙂