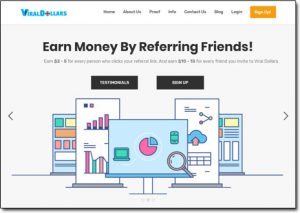 You’re even told that you can also earn an additional $2 to $5 for every person that simply just clicks on your link, so after coming across the site you might be thinking you’ve found your way to riches… But is Viral Dollars legit? Or is just a nasty scam that’s been set out to waste your time instead?

Well thankfully you’ve landed in exactly the right place to find out as I myself have personally taken a look into it to see exactly how it works & in this honest review I’ll be revealing the honest truth, including why its so dangerous & what you need to do if you’ve already joined.

What Is Viral Dollars?

Viral Dollars is a website that claims to provide one of the easiest ways to earn money online for social media users. It states that all you supposedly need to do is sign up, grab a link & share it to earn whopping commissions of over $10 for every member that creates a free account via your link…

But where is the money coming from?

How can it afford to pay out all of these members?

Well Viral Dollars claim (and I quote) “money generated from ad-spend revenue and sponsorship products is used to pay our members“, but what I can tell you right from the off is that this is total BS.

The truth is that Viral Dollars is actually nothing but a scam & it doesn’t pay any of its members. Instead it’s just tricking them into signing up & promoting it so that they can harvest a ton of user data & sell it on the black market.

…(which means if you’ve already signed up you MUST read this entire review to find out what you need to do to protect your data).

The reason I can say that so confidently is because I’ve seen this exact same scam several times before under various different names. Some of those names include Viral Pay, Notion Cash & Influencer Club.

It simply launches under 1 name, tricks a whole bunch of people, then disappears when it comes to withdrawal time & shortly after relaunches under a different name so that it can continue its dodgy practices.

But I do appreciate that you’re probably not just willing to “take my word for that”, after all you may have thought that the whole Viral Dollars thing was going to provide you with a life-changing income… So instead keep on reading & I’ll show you exactly how it all works below so that you can see first-hand for yourself what’s really going on.

How Does Viral Dollars Work?

Basically the people behind Viral Dollars – who are also the same people behind the likes of Viral Pay & Notion Cash are what you call “data harvesting scammers” & they’ve created a cunning platform to lure in a whole load of unsuspecting victims.

What they’re basically hoping is that when you sign up to Viral Pay, you’ll use the same details that you do to log in with other websites, such as Facebook, PayPal, Instagram etc… And once they’ve got your details they’ll basically try to get access to any accounts that are associated with your username or email address.

If they get access to your account then they’ll either use it for malicious purposes (such as ID fraud) or they’ll try to take money from it.

And if they don’t get access to your accounts then they’ll simply sell your details onto other companies on the black market which means you’ll then likely end up finding yourself bombarded with unwanted spam.

So either way it’s a lose-lose situation…

Sadly though because it’s “free”, on the surface it seems harmless – and because it’s primarily targeting younger people who may not be so aware about internet security, many are actually falling for it & “trying it out”.

But “trying it out” is exactly what they want you to do, because every time you promote the links & refer somebody to “earn commissions”, you’re basically just luring another person into their scam for them.

Which means if you’d already shared the Viral Dollars site with anybody I’d strongly recommend you share this post with them otherwise it could be you that gets held responsible if they end up getting scammed.

Oh, and just in case you’re still thinking about trying it out, be sure to check this out…

Okay, so first thing’s first – the Viral Dollars website claims that it has been around since 2005 & that it has over 500,000 members with over 200k of them that are allegedly actively making money from their sites (as shown below):

However I can tell you straight away that’s a total lie, because the Internet Archive reveals that the website was only launched in April of 2019, so it’s less than 1 month old (as shown below): 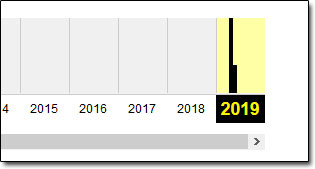 Secondly, the have a page entitled “proof” and on it they showcase so-called video testimonials – but as shown below these are also fake:

There’s just absolutely NO way a legitimate would go the lengths of hiring paid actors from Fiverr to put together fake testimonial videos – and if the service really worked as promised, there’d simply be no need to.

The reason people are so actively promoting Viral Dollars (despite it seeming like a big fat scam) is because they make it seem like the members are making money – when in reality they’re not.

And what I mean by that is that they make the users account balances increase accordingly with the clicks/referrals that they receive – so the members that are sharing it actually thinking they’re making money.

However it’s just fake – there is no real money & members are only left to discover the hard way when it comes to withdrawal time that it’s all been a big scam & a big waste of time as they’ll never get paid.

That’s why the withdrawal limit is set so high – so that you’ll need to refer at least 50+ members before you’re able to discover that it’s actually a scam. Legitimate get-paid-to websites typically have super low withdrawal limits of around $10 or under.

Is Viral Dollars a Scam?

Yes – there’s absolutely no doubt about it, Viral Dollars is a scam & it’s a very dangerous one at that. The website has been designed to steal your data, break into your accounts & then trick you into luring others into the scam.

And if you haven’t already signed up to Viral Dollars, don’t – instead check out one of these legitimate methods of making money.

Or alternatively check out Commission Academy which is one of my all-time top recommendations if you’re looking to build a full-time income online. I mean sure, you will need to put in some work to make it happen (like with anything in life) but it’s definitely one of the best places to get started if you’re willing to do that.

Whatever you decide to do though I just sincerely hope that my review here has given you a good insight into how Viral Dollars really works & more importantly I hope it has prevented you from being tricked into signing up to it. If you do happen to have any further questions or comments about it though then don’t hesitate to leave them below & as always I’ll do my best to respond as quickly as possible.