UrbansurMoney (found at urbansurmoney.com) is a brand new website which promises to provide its visitors with a way to earn lots of easy money online by simply completing small tasks from advertisings & referring friends… 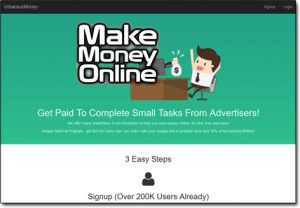 However some of the claims made by the website simply sound WAY too good to be true, such as the fact that they promise you’ll be paid a whopping $25 for every friend your refer… So what’s the deal? Is it really legit & can you truly make money with it or is UrbansurMoney a scam to avoid?

Well thankfully you’ve landed in the right place to find out as I myself have personally taken a closer look into this new site & in this honest review I’ll be uncovering the REAL truth about how it all works, including why it’s so dangerous & what you need to do if you’ve already joined to protect yourself from getting scammed. 🙂

UrbansurMoney is a strangely named new website that promises to provide people with an easy way to make money online, and not just any old money, oh no – UrbansurMoney claims its members can earn hundreds of dollars per day.

But how are people supposed to be able to make money through the site?

Well UrbansurMoney claim that all people need to do is create an account & choose to either complete small tasks or refer friends – but it’s quite clear that the site has a big push on getting people to refer friends rather than complete tasks.

So in reality putting the tasks to one side, it’s a case of signing up, sharing your link & then referring others – and UrbansurMoney claim that they’ll pay you a whopping $25 for every new member that joins via your link.

But hold on a minute…

If you join for free, then refer others & they also join for free… Then where is the money coming from that UrbansurMoney are allegedly paying out to their members?

How can they afford to pay out such a high amount of $25 per new member if everybody is just creating free accounts?

Well the truth is that they can’t, and they don’t. In reality UrbansurMoney is actually nothing more than a scam & the reason I can say that so confidently is because I’ve seen this exact same scam launched before under various different names.

Some of those names include Cashooga & RooLoot, but it’s been launched under many more than that. The scammers behind it simply keep changing the name & appearance a little in an attempt to escape the negative reviews (like mine here) so that they can continue tricking people into joining.

Instead the scammers behind UrbansurMoney are just stealing their data… And then once people realize it’s a scam they shut it down & start a new one under a different name.

But I know what you’re probably thinking – what is a data-harvesting scam & why is it so dangerous? And what do you need to do to protect yourself if you’ve already signed up? Well keep on reading & you’ll find out as I explain exactly how it all works below…

In short UrbansurMoney is just a totally fake website that promises the opportunity to get paid by referring other members, but never actually pays anybody. It’s all just a trick to con you into promoting their scam.

But what is their scam?

Well their scam is in the user registration data. They’re basically hoping that the members who sign up happen to use the same username/email/password combinations elsewhere (as many people do) and then they’ll attempt to break into any accounts associated with those details.

This could include PayPal accounts, social media accounts or even bank accounts.

And if they’re not successful at breaking into your accounts then they’ll simply sell your data onto dodgy marketing companies (and potentially other scammers) who’ll then bombard you with absolutely tons of unwanted spam.

So either way signing up to UrbansurMoney is a lose-lose situation, nothing good can come of it.

But what should you do if you’ve already signed up?

If you’ve already signed up to UrbansurMoney and you do indeed happen to use the same details you used to join elsewhere then you should go & change them immediately to prevent the scammers behind UrbansurMoney getting into your accounts.

On top of that, if you’ve referred anybody into UrbansurMoney or shared the link anywhere then you should also make sure you share this post with those people (or share it where you shared the link) to make others aware about the dangers.

If you don’t, and they end up getting scammed – you could be liable because you referred them there (even though you didn’t know it was a scam!).

Proof You Won’t Get Paid

I appreciate that the promise of obtaining easy-money can often be hard to turn down, even if you think it may possibly a scam – and as a result you may still be thinking about trying UrbansurMoney out “just in case”…

And what makes it worse is that the scammers behind UrbansurMoney have gone to great lengths to try & make people believe that it might be legit, because they’ve set it up so that people’s account balances increase in turn with the tasks/referrals that they complete, so people think they’re actually earning.

However those numbers are just totally fake, there is no money, but sadly people are only left to discover this the hard way when they to withdraw (which is why the withdrawal limit it set so high).

On legitimate get-paid-to websites the withdrawal limit is generally only around $10 or less, and on legit sites that pay for tasks like UrbansurMoney you typically won’t see yourself being able to earn any more than $1 per day, because the tasks are so easy.

There’s simply no need for these types of companies to pay big money because there are so many people willing (and able) to complete the tasks.

If you want to make big money online then you’d need to look into something like affiliate marketing instead – which is the method I personally use to make my own money online (and I now do it full-time).

With all that being said though, I’ve found some solid proof which shows that UrbansurMoney is totally fake (so there’s no need to “try it out”)…

The first bit of proof relates to the statistics, because as shown below the UrbansurMoney website claims to have over 200,000 members & it claims that those members have earned over 550 million dollars:

However a quick WHOIS search on the domain reveals that those statistics are completely fake, as the domain was only registered 13 days ago (at the time of writing this review) as shown below:

But that’s not the only bit of proof I have which highlights that UrbansurMoney is fake, because the address does as well. They claim that their company headquarters are located “49 Rathbon Way, London, W1T 1JU, United Kingdom” but according to Google Maps this is a completely fake address.

And when I ran a search for the address, as shown below I discovered it was associated with other referral scams:

The other scams the address is associated with include Cashooga & RooLoot, which I’ve already exposed here on this blog. They’re identical to the UrbansurMoney scam so it looks like they’re all operated by the same person(s).

With all of those lies there’s simply no way you should trust the UrbansurMoney site, which brings me onto…

Yes, there’s no doubt about it, UrbansurMoney is definitely a scam & it’s the same scam that I’ve seen time & time again launched under different names. None of the members ever get paid & instead the only people profiting are the people behind it.

Sadly though the members are generally only left to discover the hard way (after putting in hours of work promoting it or completing tasks) that the website doesn’t actually pay & that they deny or ignore withdrawals.

Remember – if something sounds too good to be true, it probably is.

But the good news is that if you are indeed still looking for ways to make money online then you can check out my list of legitimate ways here – but remember the amount of money you get will be proportional to the amount of work you put in or risk you take. There is nothing that will make you rich with ease or with no risk…

However if you are looking to build a large income online (rather than just extra money) then I strongly suggest you check out Commission Academy as that’s where you’ll be able to get access to free training on how to get started. You’ll learn about the same method that I use to personally build my own income.

Whatever you decide to do though I just hope that my UrbansurMoney review here has given you a good insight into how it all really works & hopefully it has helped prevent you from getting tricked into signing up. If you do happen to have any further questions then don’t hesitate to leave them below & as always I’ll get back to you as soon as possible – plus don’t forget to share this post with your friends as well. 🙂

4 thoughts on “UrbansurMoney Scam Busted! My Review Uncovers Why Nobody Gets Paid”