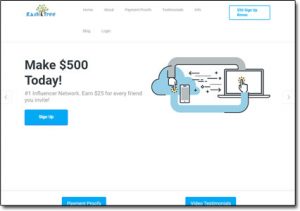 They claim that there’s absolutely no cost to get started, that you can earn $500 the same day you get started & that you’ll even get paid $50 just for signing up… But is it really legit? Or is KashTree a scam to avoid?

Well I’m glad you decided to do your due diligence and came here to this KashTree review before diving in & signing up because I can tell you right from the off that the whole thing is NOT what it seems.

As I briefly touched on above KashTree claims to be the “#1 influencer network” and it promises to provide people with a really easy way to make hundreds of dollars per day online by simply sharing links on social media.

Visitors are led to believe that they can simply sign up to KashTree for free, grab a referral link to share & then earn $25 for each friend that they get to sign up just like they did… 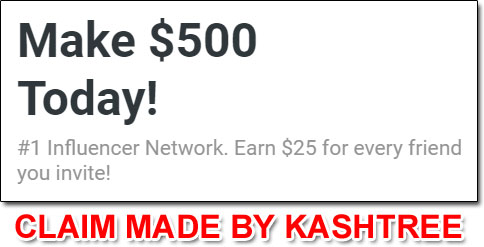 But obviously $25 per signup is quite a lot of cash, especially since everybody is creating accounts for free… So where is the money coming from? And does KashTree really pay its members like they claim?

Well the short answer to those questions is that there isn’t really any money, and KashTree don’t pay their members like they claim…. The whole thing is actually just a con to trick you into handing over your data as you’ll soon see in just a moment.

And the reason I can say that so confidently here right from the off is because I’ve actually seen this scam several times before launched under various different names such as MoneyChaser, EasyCashJob & TheMiniPay.

If you click on my reviews of any of those previous versions of the scam you’ll see that each of those websites also called themselves the “#1 influencer network”, but in reality they’re not – they’re just phonies.

So I know what you’re probably thinking now – how does KashTree actually work and how does the site scam you if it’s free? Well keep on reading to find out as I’ll explain exactly that below & you’ll soon realize that the whole thing is actually pretty darn dangerous…

So the “concept” is that you’re supposed to be able to sign up (for free), grab a link, share it & then earn $25 each time somebody else creates a free account for themselves via your link.

But if you stop for a second and think, it just sounds WAY too good to be true doesn’t it? Why would a website be giving away so much money for such simple tasks & where is the money that they’re paying out actually coming from?

How does KashTree make money if everybody is just signing up for free & sharing links?

Well the truth is they don’t – they actually make their money by scamming their members because the whole thing is actually just a phoney. The whole idea of making money through KashTree is totally made up.

Basically the truth is that KashTree is what’s known as a data-harvesting scam. This means that they’re just collecting as much data from people as possible & they’re doing it by pretending to provide a good opportunity…

After all who wouldn’t sign up if it’s free & comes with the opportunity to make good money? They know that people will likely sign up without a second thought – and once they do, they’ve got their data.

And it’s what they’re doing with their data that’s the problem, because they’re basically preying on the fact that most people use the same username/email/password for every website that they visit… So once they’ve got your data they could then attempt to break into your accounts OR simply sell it onto third parties which will result in you being bombarded with spam.

Either way it’s bad news – but what’s worse is that they’re then tricking people into actually promoting their scam for them by pretending to pay them money for referring friends.

Nobody ever actually gets paid though, instead people are just to left to find out the hard way that they’ve wasted their time & lured their friends/family into a scam that could see their accounts getting compromised.

So with that being said if you’ve already shared KashTree or know of somebody that has then you should definitely share this review too so that people can find out the real truth about how the website actually works.

They’ve just set it up so that you’ll keep promoting it until you reach the stupidly high withdrawal limit & it’s only when you reach the withdrawal limit that you’ll realize the hard way that they don’t actually pay out. By then though it’ll be too late, you’ll have already wasted your time & lured others into the scam so they’ll have already got what they wanted from you.

Real get-paid-to websites that actually pay generally only pay very little because their tasks are so simple. As a result they generally have very low withdrawal limits, often under $10… So when you see a website with a high withdrawal limit you should definitely be suspicious & do your due diligence first.

Also it’s worth pointing out that I generally don’t recommend get-paid-to websites (not even the legitimate ones) because in my opinion there are simply many better alternatives available that pay you more in return for your time.

So wrapping it up…

I don’t think I really need to say much more about KashTree because there’s no doubt about it, the website is definitely a scam & whilst the members may “think” they’re earning money none of them will ever actually get paid.

The reason I can say that so confidently is because like I said at the start of this review I’ve already seen this exact same scam several times before under various different names & I know exactly how it works… It’s just a dangerous con.

Some of its previous names include MoneyChaser, Easy Cash Job & TheMiniPay, but there are also lots more that I’ve seen it launched under too. The creators just keep changing its name in an attempt to escape the negative reviews so that they can continue tricking people into signing up.

Like I said in the previous section of this review though I don’t even really recommend get-paid-to sites in general because I believe there are simply many better alternative ways to make money that pay you more in return for your time.

One of my personal all-time favourite ways for making money online is something called affiliate marketing (which is what I do myself) and the reason that’s my favourite is because it’s easy to get started with & you can actually make a full-time income with it. There’s no cap on the amount you can earn.

So if you’re still interested in doing something legitimate online then I’d highly recommend you check out affiliate marketing & the good news is that you can actually even get started with it for free over at Wealthy Affiliate.

But whatever you decide to do I just sincerely hope that my KashTree review here has given you a good insight into how the website really works & the hidden dangers that are associated with it. I also hope it helped prevent you from getting caught out by it.

Feel free to leave any questions or comments below too – I always do my best to respond as quickly as I can. 🙂

4 thoughts on “Does KashTree Pay? My Review Uncovers The Scam Complaints That Say It Doesn’t!”