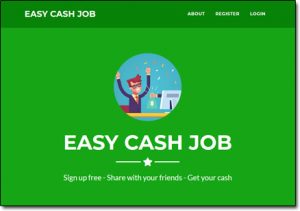 Visitors are told that all they need to do is sign up for free, share it with their friends & that they’ll get paid hundreds of dollars per month.

But is Easy Cash Job legit & does it really pay? Or is it just a scam that should be avoided instead?

Well, I’m definitely glad you decided to do you due diligence & came here to this review of Easy Cash Job before joining because I can tell you right from the off it is NOT what it seems & there is actually some serious trickery going on as you’ll soon see…

What Is Easy Cash Job?

Easy Cash Job is a website that essentially promises to provide you with a really simple & easy way to make lots of money online, even if you’ve never previously made so much as a single penny online before.

The website states that it’s literally as simple as 3 steps – signing up, then sharing a link to invite friends & earning commissions from every member that joins via your link & creates a free account.

But is it true? Could you really make money so easily? And if everybody is creating free accounts then where is the money coming from?

How can Easy Cash Job afford to pay people all of this money, what’s in it for them?

Well, the truth is that Easy Cash Job are NOT paying anybody any money – the whole thing is actually a scam & the promise of money is just a trick to get you to sign up so that they can get your details & get the details of the people you recruit.

But why do they want your details? What are they going to do with them? Well keep reading & that is exactly what I will explain next as I show in finer detail what’s really going on behind the scenes…

How Does Easy Cash Job Work?

So the whole Easy Cash Job website leads you towards believing that you’ll be able to sign up, share & make money – but that’s simply not the case. Nobody will be getting paid by Easy Cash Job because it’s all just a scam.

Well, the scam is actually a very cunning & dangerous one – and the creators of Easy Cash Job have gone to great lengths to trick you into believing that it may actually be a legit way to earn money.

You see what they’re basically doing is collecting data from as many people as possible – and then using that data they’ll then attempt to break into accounts associated with the details that people give them when they sign up.

They’re basically preying on the fact that most people sign up to multiple websites using the same usernames & passwords – so when you sign up to Easy Cash Job it’s your username, passwords & email that they’re actually interested in.

But like I say they’ve gone to great lengths to make you believe it’s legit because they’ve actually set up their website so that when you refer somebody it adds “money” to your account so that you believe you’re actually earning.

This then leads you towards promoting the scam to others (without knowing it’s a scam) and doing the dirty work of luring more people in for the scammers behind Easy Cash Job. That’s why it’s been promoted so heavily.

But what people will find out is that eventually when they “earn” enough to make a withdrawal, the withdrawal request will never get paid… It’ll just get ignored or get refused due to “fraudulent clicks”.

And that’s why they’ve set the withdrawal limit so ridiculously high – so that you’ll have to refer a whole bunch of people before you’re able to discover the hard way that the whole thing was just a waste of time.

You see most legitimate get-paid-to websites pay out very little in comparison to what Easy Cash Job promise and they likely won’t see you earning much more than $1 per day (which is why I recommend these alternatives instead).

But as a result, legitimate get-paid-to websites also have very low withdrawal limits, so when you say a high withdrawal limit on a website you should definitely be sceptical as to why they want to hold your money.

I mean come on, if this thing really worked & it was so easy for people to earn hundreds of dollars per day online just by sharing links then everybody would be doing it – nobody would be left working a job & the world would be in crisis.

Sadly it doesn’t work, but the good news is that there are legitimate alternatives which you can check out on my top picks page here.

The other way I know it’s hands-down a scam though is because I’ve already exposed it several times on this blog before under various different names such as TheMiniPay, Best Easy Work & CashOG.

The creator of it simply keeps changing the name in an attempt to escape the negative reviews so that he (or she) can continue tricking people into signing up to steal their data & try to break into their accounts… Don’t fall for it.

But then on top of that, there’s the fact that Easy Cash Job gives absolutely no information away as to who’s supposedly behind the opportunity. The person behind it remains entirely anonymous, which is not a good sign.

Is Easy Cash Job a Scam?

Yes, there’s absolutely no doubt about it, Easy Cash Job is definitely a scam & I can say that so confidently because as I mentioned in the previous section of this review I’ve already exposed this scam numerous times before under various different names.

The creators of it have just once again changed the name in an attempt to trick you into signing up so that they can get your personal data & then potentially attempted to break into accounts that you have associated with it (such as PayPal, Facebook accounts etc).

For that reason, it is safe to say that I will not be recommending that you join Easy Cash Job, and if you have done so already (and you did using the same details you use elsewhere) then you should change them ASAP.

But if you’re still looking for a legit way to earn money online then I highly advise you check out affiliate marketing as it is something that will prove to be much more lucrative for your time & it is also the same way I personally make most of my own money online.

It simply involves you connecting people with products/services online & getting paid commissions in return – plus there’s actually no cap on that amount you can earn either & you can get started with it for free at Wealthy Affiliate.

Or alternatively, you can also check out these other great options on my top picks page here.

But whatever you decide to do I just sincerely hope that my honest review of Easy Cash Job here has given you a good insight into how it all really works & hopefully, you can now see why it should be avoided. Feel free to leave any comments or questions below.