TheBucks.Club is a brand new website that’s promising to provide its visitors with an easy way to earn up to an extra $500 each month by simply “renting out” the business side of their Facebook Ads account. 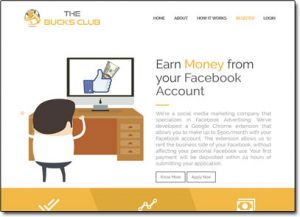 Visitors are led to believe that all they need to do is sign up, install a Chrome browser extension & that they will receive their first payment within just 24 hours…

However other than that The Bucks Club website doesn’t really give much more information as to how it all works which has likely left you feeling suspicious… So does it really work? Or is The Bucks Club a scam?

Well I’m glad that you came here to my review of The Bucks Club before signing up because I can tell you right from the off that it’s not what it seems and it’s potentially a very dangerous site.

What Is The Bucks Club?

The Bucks Club (found at TheBucks.Club) is a newly launched website that claims to provide a revolutionary new way for people to begin earning up to $500 per month from their Facebook accounts with ease.

You’re led to believe that providing you meet their criteria you can simply sign up, install a Chrome browse extension & begin receiving monthly cheques of $500 without having to do anything else at all…

But could you really make money so easily? Is it actually legit? And will your Facebook account be safe?

Well those are the exact questions I’ll answer in just a second, but first let’s take a look at the criteria they require to see if you’re eligible:

But if you are eligible then should you join? Can you really earn money with it?

Well I am going to say that NO, you shouldn’t join – and the reason I say that is because I am extremely sceptical about The Bucks Club website because there are many red-flags which I am going to expose in this review.

In my opinion the whole thing looks like a scam, and it could be a very dangerous data-harvesting scam which you definitely don’t want to find yourself a part of – or it could hijack your Facebook account & use it for illicit purposes.

One of the main things that leads me towards saying that is the fact that The Bucks Club website gives NO details whatsoever as to who’s behind it – and there’s also another identical site running under the name of FB Dollars.

It’s all very suspicious indeed, but let’s take a closer look into how it works to find out for certain what’s going on…

How Does The Bucks Club Work?

So if you’re eligible to join The Bucks Club then you’re instructed by the website that the first step is to enter a few details to register, and then to download & install their custom Chrome browser extension so that they can use your ads account…

However I wouldn’t recommend rushing into doing that as the reviews of the Chrome extension from the Google webstore (as shown below) are extremely alarming: 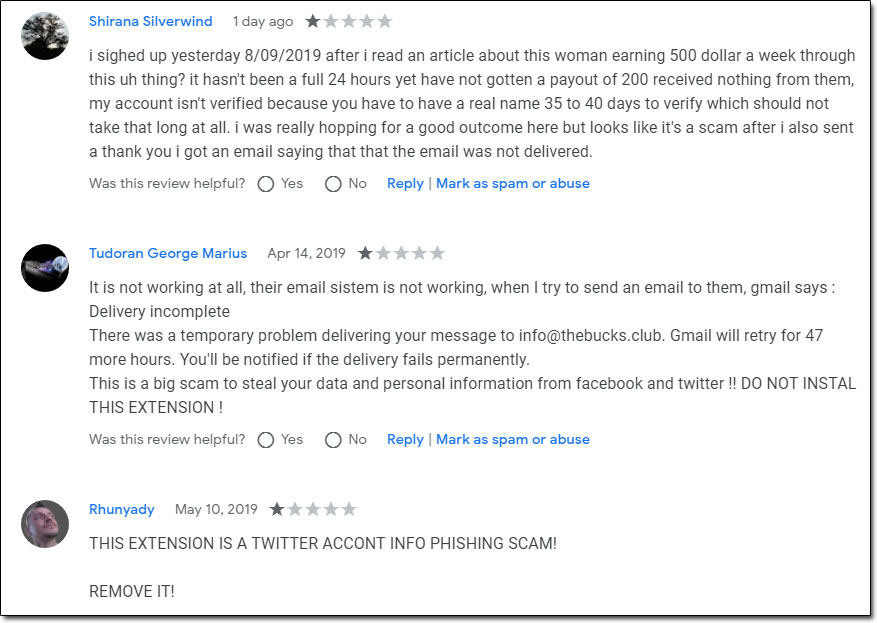 And those are just the 3 latest reviews of The Bucks Club, there are many, many more like it…

But what if you did install the extension, what’s it supposed to do?

The answer is because quite clearly they’re up to something dodgy & they’ve likely already got their own account banned (or don’t want to be traced to whatever it is they’re up to).

So they’re basically trying to get you to do their dirty work for them – which will either result in you getting into trouble, or more likely getting your Facebook account banned from misuse of the ads platform.

But There’s a Bigger Problem…

The other big problem with The Bucks Club browser extension is that you simply have no idea as to just what it’s doing.

I mean yes, they might claim that it’s just using the Facebook Ads side of your Facebook account, but how do you know that for sure? It could be monitoring your browsing & recording your details…

And as one user suggested within the reviews of the extension the whole thing could be a phishing scam – specially a Twitter phishing scam.

You see recently I’ve come across an influx of scam sites that all look remarkably similar to The Bucks Club & they’ve all been getting heavily promoted through hijacked Twitter accounts – so potentially these sites are interlinked.

I mean I don’t know that for sure, but it certainly looks possible & all I know for sure is that there is NO way I would hand over my Facebook account details to a website that remains totally anonymous. 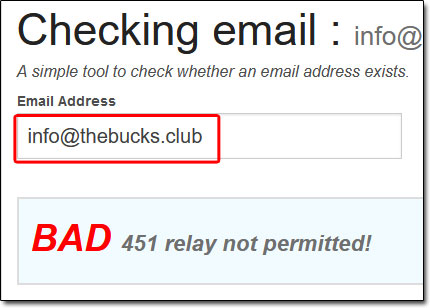 That sure doesn’t look good & I hope there’s no way you’d hand over your details to a site like, not even for the chance of getting $500. It’s just way too risky in my opinion & the chances of being scammed are way too high.

Is The Bucks Club a Scam?

In my opinion yes, I do believe The Bucks Club to be a scam & I say that because frankly there are just WAY too many red-flags & complaints that make the whole thing seem extremely suspicious.

Plus even if the browser extension was legit, and even if they did really pay you in return for using your ads account, the risks are still way too high because it’s clear that they’re going to be using the ad account for something dodgy.

I mean if it were legitimate then they would just use their own ad account rather than paying other people to use theirs… So one way or another there’s definitely something dodgy going on & I wouldn’t recommend being a part of it.

Oh and then of course there’s the fact that the thing has previously been seen before under the name of FB Dollars. It seems like they’ve renamed it in an attempt to escape the negative reviews so that they can trick more people into signing up.

Therefore it’s safe to say I am not going to be recommending The Bucks Club, and instead if you really want to make good money online I suggest you check out one of the legitimate methods from my top picks page here.

One of the best methods I recommend is something called affiliate marketing which is where you connect people with products/services & get paid commissions in return. It’s a really good way to make money.

The great thing about affiliate marketing is that your earnings are completely uncapped (some people make $100+ per day with it) and you can get started with it for free over at Wealthy Affiliate.

But whatever you decide to do I just sincerely hope that my review of The Bucks Club here has given you a good insight into how the whole thing really works & hopefully it has helped prevent you falling victim to the scam.

Feel free to leave any further questions or comments below. 🙂