PaidLeaf is the name of a website which has just launched claiming to be the “#1 influencer network” and promising to provide people with a way to easily earn as much as $500 per day by simply sharing links on social media. 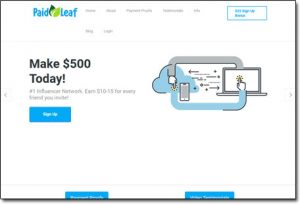 Visitors to PaidLeaf are told that they can simply sign up for free & then invite others to earn money.

But is it actually legit? Or is PaidLeaf a scam?

Well, I’m glad that you came here to this PaidLeaf review first because I can tell you right from the off that the whole thing is not what it seems… It’s actually a pretty dangerous website.

So as I briefly touched on above, PaidLeaf calls itself the “#1 influencer network” and it essentially promises to provide people with a really easy way to make lots of money online by simply sharing referral links on social media.

As a visitor to PaidLeaf you’re led to believe that all you need to do is simply sign up for free, share your unique referral link & that you’ll then begin getting paid between $10 and $15 for every person that signs up after clicking on your link.

But I know what you’re probably wondering… If everybody is just creating free accounts on PaidLeaf then how on earth is PaidLeaf making money? How can they afford to pay out commissions to their members?

Well, PaidLeaf claim in their FAQ that “money is earned from advertisers” and they claim that by promoting their website you’re increasing the traffic (the number of visitors) which increases their advertisement revenue… But that’s BS.

There are 2 reasons I know it’s BS…

The first reason is because there are no adverts on the PaidLeaf website – which is a pretty obvious giveaway to it being BS… But the second reason I know it’s BS is because I’ve actually seen this exact same scam before.

The people behind the PaidLeaf scam simply keep changing its name in an attempt to escape the negative reviews that surface exposing the truth (like mine here) so that they can continue tricking people into signing up to it.

Some of its recent other names include the following;

So what’s really going on? How does the scam work? And how do you protect yourself from getting scammed if you’ve already signed up? Keep on reading to find out as that’s exactly what I’m going to explain next…

So as I stated in the previous section of this review the concept is that you sign up to PaidLeaf & then share it with others in order to earn money, however, the truth is that the whole thing is just a phoney.

Yes you can sign up, and yes you can refer others – and yes your account balance will appear to increase accordingly as each new person joins up via your link… But I can tell you that no-one will ever get paid.

The reason I can say that so confidently is because the whole thing is actually just what’s known as a data-harvesting scam.

This means they’re basically tricking you into handing over your data (by signing up) and then tricking you into promoting PaidLeaf onto others so that they can get their data too… A “viral” data-harvesting scam if you like.

Unfortunately, you’ll only be left to find out its a scam the hard way when you finally request a withdrawal & realize that it never gets processed… And that’s the reason PaidLeaf have set such a ridiculously high withdrawal limit.

They want you to refer as many people as possible to PaidLeaf before you discover it’s a scam.

So What Are They Doing With The Data?

The reason I said that PaidLeaf was dangerous at the start of this review is because they’re doing some terrible things with the data they’re obtaining & it could potentially result in your accounts getting compromised.

You see the people behind PaidLeaf are basically working on the concept that most people use the same email, username & password combinations for every website that they visit…

So when you sign up to PaidLeaf (which I don’t recommend doing) they’re basically hoping you do so using the same details you use elsewhere – and then they’ll try to compromise your accounts.

That could include your social media accounts, PayPal accounts & even bank accounts…

But even if they’re not successful in doing that the problem doesn’t end there because they will then proceed to sell your details onto 3rd party companies in return for profit which will see you getting bombarded with spam.

What’s worse is that the spam you’ll be getting will be pushing more scams, like Best Money Search, Bitcoin Frontiers & Crypto Legacy Pro… So it’s safe to say that PaidLeaf is 100% bad news.

Yes absolutely, PaidLeaf is definitely a scam. The whole website is set up to trick you into signing up & then trick you into getting others to do the same… They don’t really pay – they just want to get your details.

Like I said earlier in this review I’ve already seen this exact same scam under several different names such as InfluencersEarn, NiceCash & Tap 2 Earn… The person behind it simply keeps changing the name in an attempt to escape the negative reviews.

And the problem with the PaidLeaf scam is that it’s very dangerous because the people behind it are ultimately trying to compromise your accounts & sell your details onto random third parties who could use them for anything.

It, therefore, comes without saying that I’m NOT going to be recommending PaidLeaf & instead I’m going to be advising that you avoid it because it spells nothing but trouble.

Also if you’ve already signed up to PaidLeaf & you did so using the same details that you happen to use elsewhere then I’d highly recommend you go & change them ASAP to prevent them from getting into your accounts.

But if you still want to make money online legitimately then don’t worry because all is not lost – there are still plenty of legitimate alternatives that are proven to work & you can find them here on my top picks page.

I’ll point out too that one of the best methods, in my opinion, is something called affiliate marketing. The reason I say I think it’s the best is because it’s actually the same way I personally make most of my own money online & if you’re interested in it then you can learn more or get started at Commission Academy.

Whatever you decide to do though I just sincerely hope that my review of PaidLeaf here has given you a good insight into how the whole thing really works & more importantly I hope it has helped prevent you from getting caught out by it.

If you still happen to have any questions or comments about it though then don’t hesitate to leave them below. 🙂