You can make $100 per day online through a copy & paste method according to a newly launched website named Crazy Money Online (located at crazymoneyonline.com). 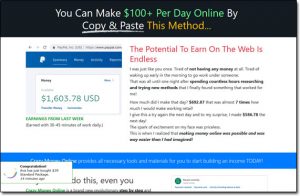 But before you can get access to the money-making method you need to hand over at least $39 of your own cash first.

So is Crazy Money Online legit?

Or is Crazy Money Online a scam to avoid?

Well, you’ll be glad that you came to this Crazy Money Online review before you bought into it because I can immediately tell you that the whole thing is not what it seems.

What Is Crazy Money Online?

Crazy Money Online is a new website that’s getting heavily promoted on YouTube promising to provide people with an easy way to earn $100 per day online.

The website claims that the process just involves copying & pasting & that anybody can begin making money with it within just 24 to 48 hours of signing up.

But other than that, the website doesn’t really give much away as to what it actually involves.

Instead, you’re pushed towards purchasing one of two packages.

But no doubt you’re probably sceptical about handing over money in order to get access to a money-making method, and so you should be.

And the reason things don’t add up is because Crazy Money Online is actually a scam.

There isn’t really any “copy & paste” method and none of the members that hand over cash to get started will be likely to find themselves actually making money.

Instead, the only people making money from Crazy Money Online will be the people that are behind it & they’ll be earning at the expense of those they trick into signing up.

How Does Crazy Money Online Work?

The website promises to provide people with access to a really easy way to make money online but requires people to hand over their cash first in order to get started.

Then, upon handing over their cash new members will simply be left to find out the hard way that Crazy Money Online doesn’t really work as promised.

All they get provided with is a very basic, low-quality eBook which briefly touches on a method known as affiliate marketing.

And this is where I’ll point out that affiliate marketing itself is legitimate, but the eBook provided via Crazy Money Online will not really help you to get started with it.

The only reason the people behind Crazy Money Online actually provide people with an eBook is to try to prevent them from being able to obtain a refund.

They’re not really interested in helping anybody – they just provide the eBook so that when you try to get a refund, they can reject it by claiming that you’ve already accessed the information.

Sadly Crazy Money Online isn’t the first type of scam like this, these types of scams are pretty common.

I’ve exposed literally hundreds of them over the years on this website.

They work on arousing curiosity & hope that people will simply hand over some cash to “try them out”.

The problem, however, is that the moment you hand over your cash to “try it”, you’ve fallen victim to the scam & the people behind it will have earned at your expense.

The good news though is that whilst the training provided via programs like Crazy Money Online isn’t legit, I’ve actually put some legitimate training together right here that you can access for free.

In the free training, you’ll learn all about affiliate marketing which basically involves you promoting products or services for companies online in return for commissions & you’ll learn how you can get started with it.

It’s a very good way to earn money & it’s the same way that I personally make most of my own money online too.

In this instance with Crazy Money Online, it definitely is.

Then there’s the fact that Crazy Money Online gives absolutely no information about the method whatsoever & instead forces you to hand over your cash to find out more.

That’s the most common trick associated with a get-rich-quick scam.

A website should always be upfront & transparent about exactly what you’re going to be getting access to before you’re required to hand over any of your money.

On top of that, there’s also the fact that Crazy Money Online offers 2 different packages.

If the method is truly as simple as just copying & pasting, then why would you need to pay more money for access to more training?

Clearly, the method isn’t really as simple as they make it out to be.

They’ve tried to make you believe that their opportunity may actually be legitimate by deploying various so-called “testimonials” from real users on their website.

The problem, however, is that the people shown aren’t real users.

That image used is actually that of a man named Beau Lebens, a programmer, as shown below:

Regardless of how legitimate a company may appear, you should never trust it if it uses fake testimonials. That’s a very common red flag associated with scams.

Is Crazy Money Online a Scam?

In reality, the whole thing is just a trick to get you into handing over your cash so that the people behind it can earn themselves some money at your expense.

After buying into the Crazy Money Online system you’ll just get provided with an eBook that offers extremely basic training on a method known as affiliate marketing.

And whilst affiliate marketing is a legitimate (and very good) way to earn money online, it doesn’t just involve copying & pasting, there’s much more to it than that.

As a result, if you really want to see success with affiliate marketing & make good money from it you’ll need proper, proven training like that found at Commission Academy.

Or you can even check out my own free guide here.

But whatever you do, just avoid the Crazy Money Online system because it’s nothing but junk & it’ll just see you losing money as opposed to actually making it.