Just the other day I came across the Crypto World Evolution website which was being promoted by a guy named Simon Stepsys & I decided to take a closer look into it to see what it was all about. 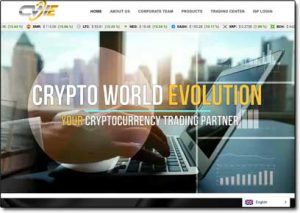 After visiting the website I discovered it was supposedly some piece of “automated trading” software that could allegedly enable you to make money from the cryptocurrency market on complete autopilot, even if you don’t know a thing about cryptocurrency trading…

But obviously, that’s an extremely bold claim, so no doubt if you’ve landed here on my review you too are likely asking the same question I was when I first came across it… Is it actually legit? Or is Crypto World Evolution a scam that’ll just rob you of your cash?

Well, don’t worry you’ve come to the right place as I’ll be uncovering the TRUTH right here in my honest review.

What Is Crypto World Evolution?

Well, one of the weirdest things I immediately discovered about the Crypto World Evolution site is that despite costing over $2,000 to get started with the site seems to give very little away as to how it all actually works…

And that’s a huge red flag!

I mean typically you’d expect a program costing so much money to give you all the ins & outs of what you’re buying into. You’d want to know how it works, how it can predict profitable trades & what the chance of you actually making money is… But none of that information is given out.

Instead, the product just says it can “maximize your trading performance”… But in real terms, what does this mean? How much is it going to make us (if anything at all?)… That’s what we really want to know.

The fact they give so little information away is extremely suspicious & it’s a common tactic associated with get-rich-quick scams so it’s safe to say that right from the off I am extremely sceptical about the Crypto World Evolution site.

What makes me even more sceptical about it as well as the fact that the person who got me there was Simon Stepsys – he’s a man associated with pushing various scams in the past (such as My Advertising Pays) & seemed heavily associated with The Advert Platform scam too.

So is there actually any substance behind the Crypto World Evolution program? Can you make any money by getting involved with it like the people who are pushing it are promising? Well, kinda, but it’s not as it seems – and most people WON’T make money.

How Does Crypto World Evolution Work?

Okay, so the slightly good news is that there are indeed actual trading robots inside of the Crypto World Evolution program – which is actually unusual to see. More often than not these “automated trading” systems just tend to be flat-out scams which have purely been put together to trick the visitor into signing up with a broker so that the people behind them can earn a commission.

The Bitcoin Profit scam (an automated trading system I recently reviewed) does exactly that and leaves the visitor to find out after depositing that there isn’t actually any real automated system after all.

But anyway yeah, inside of the Crypto World Evolution there is indeed trading robots… BUT you shouldn’t expect these robots to generate automated profits for you or anything like that. They are not built on any sort of magical formula & the truth is that given the way the crypto market is going at the moment they will be much more likely to generate losses than profits…

In fact one of the FAQ’s on the Crypto World Evolution describes the bot as being:

“the developer’s best educated guess on how the market will work in the future. It is not a magic crystal ball that will make perfect trades every time.”

So yeah, whilst it might seem pretty exciting on the surface, in reality, is it not all that… And if you DO actually manage to make any profits, guess what? There’s a hidden clause that requires you to pay 20% of your weekly profits to the person that referred you to the site (and this is where the truth about it comes out).

The Crypto World Evolution site is actually a multi-level marketing program & that’s why it’s being promoted so heavily – because the people who are promoting it are earning money by getting people to sign up.

This means that most of the people who are promoting the Crypto World Evolution site & telling you how amazing it is aren’t actually using it to trade at all. They’re just big-name marketers (like Simon Stepsys) who are actually just earning money from it by getting others to sign up.

So if you don’t know how to market things then you’re likely going to find yourself struggling with the Crypto World Evolution program as the trading tool, in my opinion, seems to be extremely risky. Not only could you lose a lot of money on the initial investment (which is $500 to $2,000) but you could also lose a lot via the trading robots too as there’s no guarantee of profit.

On top of that, it also means that you’re going to need a BIG budget (that you can afford to lose) if you want to stand any chance of making money through the site as it’s not something that’s just going to turn $1 into millions.

Is Crypto World Evolution a Scam?

Given all of the evidence, it looks very risky indeed – and the setup looks a lot like a pyramid scheme, but technically I would not go as far as to call it a scam because essentially you do get an automated trading robot for your money (even though the trading robot, in my opinion, is not as great as it’s made out to be).

The truth though is that the people who are making the most money via Crypto World Evolution are doing so by recruiting others to the site & getting them to trade their money, not by actually trading money themselves… If you do want to use the site to trade then you should know that you stand a high chance of losing your money & that the packages are not cheap at all.

If you really want to make good money online there are plenty of SAFE methods you can use instead, such as affiliate marketing (which is the same way I personally make most of my own money online).

If you want to learn more about affiliate marketing, which in my opinion is one of the best ever ways to make money online (especially if you’re a beginner) then be sure to check out Commission Academy my top recommended training program.

Overall though whatever you decide to do I just hope you found my review here useful & hopefully it gave you a better idea as to how the whole Crypto World Evolution thing works. If you do still happen to have any questions about it though then don’t hesitate to leave them below & I’ll do my best to answer them as quickly as I can.

2 thoughts on “The Crypto World Evolution Scam – Don’t Get Caught Out! Read My Review First”