The Cryptologic trading robot claims to be a next-generation bot that can supposedly see you generating huge profit margins from cryptocurrency trading without having to pay anything upfront & without the need for any experience. 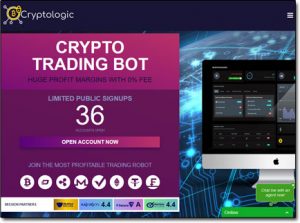 According to their website, you can get started 100% risk-free & you can even try out a demo account to allegedly see that it works – but what’s the real story here?

Is it actually a legit trading software or is Cryptologic a scam that’ll just leave you high & dry?

Luckily you’ve landed in the right place to find out because I’ve done the digging & in this review, I’m going to be uncovering everything there is for you to know including most importantly whether or not you can really make money with it.

What Is The Cryptologic Bot?

The Cryptologic bot, according to its website is a trading robot that can supposedly make profitable trades entirely on your behalf. You’re led to believe that you can simply sign up, “start” the software & start generating profits almost immediately – even if you have absolutely no idea about cryptocurrency.

The robot claims to have an 87% win rate & the website promises that for every $1 you deposit you will make at least $1.49 in return. That might not initially sound like too bold of a claim but scale it up & they’re promising that if you invest $10k you’ll get $4.9k back in return on top of your investment.

That’s a pretty crazy ROI, and I’m afraid this is the point where unfortunately I’m going to have to burst the bubble – you see the truth is that whilst all this sounds good in theory, sadly, in reality, the Cryptologic robot is merely yet another binary options trading scam.

And I’m not going to lie, they have made this scam seem VERY legit – it would be very easy to fall for it & I have no doubt that many people will. Thankfully though you came across this review before depositing.

How Does The Cryptologic Bot Work?

Just in case you happened to jump straight to this section of the review I want to make it clear that the Cryptologic trading robot doesn’t actually work, at least not in the sense of making you money anyway…

But I don’t expect you to just take my word for that – I appreciate that this system may have given you a lot of hope with regards to being able to generate income online so instead, I’m going to show you exactly how the scam works so that see for yourself.

Basically, as I said above this is a binary options scam, but this particular one has latched onto the hype surrounding cryptocurrency in an effort to part unsuspecting people looking to profit from Bitcoin & the like with their hard-earned cash.

I’m seeing more & more of these types of systems launching so when it comes to cryptocurrency investments/trading it’s very important to do your due diligence before investing anything. Last week alone I exposed 2 other scams very similar to this one named Bit Bubble Tech & Bitcoin Bonanza.

Anyway here’s how it works…

Firstly, to see how this scam works you need to understand about binary options. Basically this is a form of trading where rather than buying something & selling it at a higher price you simply place a “bet” on whether or not you think the price will go up or down.

Initially, this might sound quite easy – and that’s the big problem. Many people got sucked into binary options because it seemed like an easy way to make money, but because the “bets” are made over such a short period of time it’s almost impossible to make any kind of educated guess as to whether the price will go up or down in that period.

So how does this tie together with the Cryptologic system?

Well basically as you can imagine binary options was BIG, but since many people now realize what a total scam it is most people will run a mile when they hear about it. Even Forbes published an article warning about it:

This means that whereas the brokers were once thriving, making a fortune at other peoples expense, they are now struggling since nowhere near as many people are trading in binary options.

But they are not stupid – instead they’ve come up with an idea to get people trading again. That idea is to create fake systems promising guaranteed profits because they know that if they can make people think that they are going to profit then they can get them to deposit.

And that’s all the Cryptologic system is – a fake system designed to make you THINK that you can profit… Admittedly a very convincing one. The brokers have even gone to the extent of creating a fake “demo account” for you try out – of course, the demo account makes consistent profits, but you will find out that the case is entirely different if you deposit & trade with real money (which I obviously don’t recommend you do).

Now here’s the kicker – the brokers behind this system are just trying to lull you into a false sense of security so that you’ll “try it out”. They want you to think that you can simply deposit, then withdraw your money back out if it doesn’t work as promised.

The trouble is these brokers are unlicensed, which means they’re unregulated, which ultimately means they’re crooks. These guys are not real brokers at all, they’re just scammers out to steal your cash. If you think you can simply deposit & withdraw think again – there is no way these guys will let you get your money back once they get hold of it.

Basically do not get drawn into trying it out – that’s exactly what they want.

There are 2 very simple, proven ways to know that this is a scam which are;

Is The Cryptologic Bot a Scam?

The answer to that is yet, the Cryptologic bot is undoubtedly a scam & the only reason it exists is to part you with your hard-earned cash. There are so many red flags I could go on for ages but after exposing several other scams exactly the same I know exactly what I’m looking at here – and I think you already get the idea too.

I’m not going to lie though, the Cryptologic system is extremely convincing & it would be very easy to get drawn in by it – but you just have to realize that this is exactly what it’s been designed to do, draw you in.

The system doesn’t actually work as promised but sadly you’re only left to be able to find this out after depositing & by that point it’s too late – there is no way the brokers associated with this will let you get your money back.

The craziest thing about this one is the fact that they have gone to the extremity of creating a fake “demo account”. This is a big problem because I know this is going to lure a lot of people in. Yes, of course, the demo account shows profits but again this is all part of the scam… The guys behind this have spent so much money & time creating a super convincing site because they know they are going to scam millions out of it in return.

So overall it’s safe to say this system will be getting a huge thumbs down from me & I certainly won’t be recommending it. In fact, I strongly advise you to avoid it & I would be very grateful if you shared this post to help others do the same.

Anyway, hopefully this review gave you the insight that you were looking for into this system & most importantly prevented you from losing your hard-earned cash. If you do happen to have any further comments or questions please do feel free to leave them below.