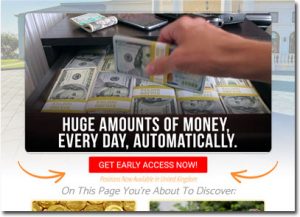 Thankfully you’ve landed in exactly the right place to find out as I myself have personally taken a closer look into this system & in this honest Easy Cash Club review I’ll be uncovering the REAL truth about how it all works as well as exposing the secrets that they don’t want you to know. So keep on reading to find out more!

What Is Easy Cash Club?

Instead it just keeps boasting about all the money you’ll be able to make & how easy it’ll be to make the money – and I can tell you that this kind of tactic is actually a common trait associated with a get-rich-quick scam.

I’ve seen literally hundreds of other systems do the exact same thing. They promise the world on their sales pages, saying that everything will be super easy & that you’ll get rich in no time at all – then they ask you for some cash to get started & end up leaving you to find out the hard way that it doesn’t really work as promised after all.

By that point though it’s too late, you’ve spent your money & then they make it extremely difficult for you to get it back.

What the Easy Cash Club system does say though is what it DOESN’T involve… And this is where things get even weirder because the system’s sales page says it doesn’t involve owning a website, yet on the purchase page Steve (the creator) says that the only reason he’s asking for money is to cover the costs of hosting your website.

Take a look at what I mean in the screenshots below:

So it’s safe to say that right from the off I’m extremely sceptical about this whole thing & I suspect that it is actually just another scam, however I won’t brush it off so easily – instead keep on reading & I’ll dive deeper into exactly how it all works to see if there’s any money to be made with it at all.

How Does Easy Cash Club Work?

The reason I say that is because as far as I’m concerned the sales page for this system is extremely over-hyped & whilst you’re told you can make thousands of dollars with the system you’ll probably be lucky to make so much as just ONE dollar, never mind thousands.

But anyway, onto how it works…

Steve the so-called creator of the whole thing tells you in the video that he’s a programmer & internet millionaire who works just 30 minutes per day and generates thousands of dollars. He apparently does all of this through YouTube, using a system that he’s designed himself.

So essentially the Easy Cash Club is all about making money from YouTube & what you’re actually purchasing is a tool that basically turns text into videos… That’s all it is – and then alongside that you get some training on how to make money from the videos.

Now I’ll point out here that there is actually quite a lot of content inside of the program with regards to profiting from YouTube, over 25 hours of it to be precise, but the problem is that most of it can actually be found quite easily elsewhere online for free…

So you’re paying for something that you don’t really need to pay for… And whilst the video creation tool itself sounds kinda cool it that it can automatically generate you videos, there are also a couple of problems with this as well…

Firstly these kinds of tools are also readily available elsewhere for free (just run a Google search for free video creator & you’ll find several) – but secondly the videos the software produces are too basic to make money from.

There’s NO way Google will approve you into their ad network with these types of videos on your YouTube channel (due to the quality of them) and so you might have a channel full of videos, but you won’t be making any money!

YouTube is owned by Google, and Google run an advertising company called Google Adsense – so when you start getting a certain amount of views on YouTube you can submit an application to Adsense & if approved you’ll be able to run advertisements alongside your videos which you’ll earn money from.

You can earn money each time the ads or viewed or each time the ads are clicked, but to be honest you don’t get a great amount of money for either so if you want to make anything “decent” then you’ll need a LOT of YouTube views.

However Adsense are pretty strict about who they let into their program because they obviously care about their advertisers – after all these are the guys that their business is making money from.

So they don’t want advertisers paying good money to have their adverts placed next to low-quality “scammy” videos which is essentially exactly what the Easy Cash Club system provides you with.

There’s just NO automated tool out there that could ever replicate a real, human created video.

Therefore whilst it might seem easy on the surface that you could just use the tool to create a whole bunch of videos & upload them to your channel to get a load of views, the channel will have super low engagement & as a result won’t get accepted into Adsense.

So it’s just a shortcut that doesn’t really work…

And Then There’s The TRUE Cost…

At a seemingly small cost of just $37 you might be thinking “oh what the heck, I’ll try it anyway”, but the problem is that’s not the true cost & in reality the Easy Cash Club costs WAY more than that.

I found that out when I visited their affiliate page as it had a breakdown of the costs (shown below):

But what’s worse is that they actually save your credit card details so just one accidental click could see you getting billed for all of those amounts… I don’t really like the idea of that if I’m being honest. Too risky!

The Red-Flags That Prove It Doesn’t Work

The first is the fact that as shown below they’ve had to use fake testimonials:

You’re told the testimonial has been left by a 25 year old lady named Mary from the Philippines however the girl pictured (who’s supposedly left the testimonial) is actually named Joy Anna Duggar & she’s from a reality TV show named 19 Kids and Counting.

I was able to find that out using Google’s awesome reverse image search tool which lets you search by an image & find matching ones online.

As you can likely imagine the same applies to all of the other “testimonials” too but I don’t think there’s any need for me to go through them all – I think you probably get the idea here already.

But the fact that they’ve actually had to create their own fake testimonials blatantly highlights that it doesn’t work as promised, because if it did then they’d have a whole bunch of real members willing to leave testimonials I’m sure.

The other piece of proof is the fact that at the very bottom of the Easy Cash Club website there’s a link for “Affiliate Sign Up” (as shown in the image below) which basically means that the creators of the program are PAYING people commissions to promote the program:

So ask yourself these questions – if the system worked as promised then why would the creators need to pay people to promote it? And secondly why on earth would people waste their time promoting it for commissions when if it worked they could just sign up to it & make money automatically?

The answer is simple, it’s because it 100% doesn’t work as promised!

It’s basically just a re-hashed version of the Tube Profit Sniper & YT Crusher scams that I previously exposed on this blog.

The Easy Cash Club program itself won’t really help you to make money from YouTube, but in general the truth is that you can actually make money on YouTube – and you can make some pretty darn good money with it too.

What I’ll tell you though is that advertisements are not really the best way to do it. Instead if you really want to generate the good money from YouTube you need to be doing something called affiliate marketing.

This is where you basically connect people with products (like products from Amazon) & get the opportunity to earn commissions on the sales if the people who click your links happen to make a purchase.

Here’s a visual which might make it easier to understand:

You can make money from literally ANY interest with affiliate marketing which is why it’s so cool, and what’s even cooler is that you can actually get started with it for free over at Wealthy Affiliate.

Is Easy Cash Club a Scam?

Well I appreciate that you do actually get access to “something” in return for your money when you buy into the Easy Cash Club, however in my opinion it’s extremely misleading & what you do get isn’t really what you were sold… So for that reason I am going to say that yes, I personally believe the Easy Cash Club system is a scam.

I mean as far as I’m concerned the whole thing is not really set out to help you make money like it claims to be. Instead it’s just set out to make it’s own creator wealthy at your expense by tricking you into signing up.

You’re promised fast & easy riches & you’re led to believe that you’ll begin making money right after signing up but none of those things will happen. Instead you’ll just be left with some pretty basic training material, a pretty naff video creator & several upsells that push you into spending even more money.

And even if you did follow all of the training to the letter & create/upload the videos as you’re told to, like I mentioned earlier in this review the likelihood of YouTube’s ad network (Adsense) actually accepting you is very small due to the fact that the videos the system produces are such low quality.

Therefore it probably comes without saying that I won’t be recommending this system to you, and instead if you really want to learn how to generate profits online legitimately I suggest you just check out Wealthy Affiliate as it’s there that you’ll get the proper training & tools to learn how to do it.

Plus there are also all of these other legit ways to make money too which you can check out as well.

Regardless though, whatever you decide to do I just hope that my review of the Easy Cash Club system here has given you a good insight into how it really works & hopefully you can now see why it should be avoided. If you do happen to have any further questions or comments about it though then don’t hesitate to leave them below & I’ll get back to you as soon as I can.