To be honest, I thought everybody had pretty much forgotten about eBay & moved on to Amazon these days, but apparently not as a new money-making system named the EB Formula system has just launched & it promises that it can enable its members to earn $3,624.18 per day from eBay without any investment whatsoever. 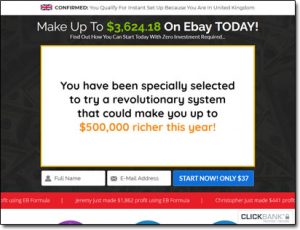 Its creator Dan Wright states that it’s super easy & that anybody can do it – even if they’ve never sold a single thing on eBay before… But if that’s the case then why isn’t everybody doing it? Right from the off it sounds fishy to me…

So what’s the deal, is it legit? Or is the EB Formula a scam that’ll just part you with your cash rather than actually help you make it?

If you’ve come across the system & have been thinking about trying it out then you can rest assured that you’ve landed in exactly the right place to find out the answers to those questions as I’ve personally taken a closer look at it & in this honest review I’ll be uncovering everything you need to know (including of course whether or not it really works).

What Is The EB Formula?

So as I briefly touched on above the EB Formula system is a system that’s allegedly been put together by a guy named Dan Wright, and it essentially promises to provide you with a way to easily earn a fortune from eBay – without having to fork out any upfront investment.

Now the video itself on the EB Formula website goes on for about 20 minutes, but in short it just basically says that Dan apparently originally started a design business with a guy named Warren Paul, but Warren later took all of the money out of the company & ran away, leaving Dan in a lot of financial trouble…

Luckily though Dan allegedly met up with an old school friend named Jason who was supposedly making a fortune from eBay using a “little known secret”, and after sharing the story of his financial problems to Jason, Jason apparently helped Dan out by giving him his “eBay secret”…

And not just any money either – oh no, Dan claims that the members of his system will be able to earn a whopping $3,624.18 per day, which I think you’ll agree is an insanely large sum of money.

But it all sounds a little bit too good to be true, don’t you think?

And sadly I can confirm right from the off that the reason for that is because IT IS too good to be true. The reason I can say that confidently so early on is because I’ve seen this exact program before under the name of EZ Bay Payday. 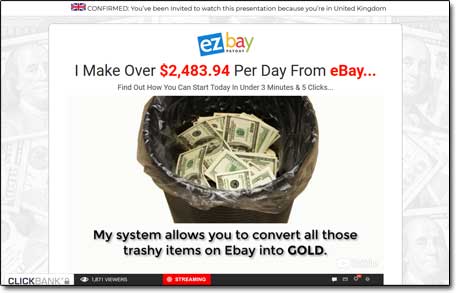 Back when it was called EZ Bay Payday though you were told it had been put together by a guy named Steve Richards, so it’s blatantly built upon a complete pack of lies & you can see proof of that in my previous review of EZ Bay Payday.

In short, it’s just a typical get-rich-quick product being sold via ClickBank – it promises the world but fails to deliver, meanwhile leaving you short of the cash that you paid to get started with it. I see these types of things all too often but thankfully you came to this review before joining so hopefully you’ve been able to dodge it.

How Does The EB Formula Work?

Well according to the website of the EB Formula system the whole process consists of just 3 simple steps – fill in the form, activate your account & watch your profits grow – as highlighted below:

However, as you have likely already guessed, it doesn’t work that easy – and the truth is that you will be unlikely to make any money at all via the EB Formula system. Instead, you’ll probably just end up spending money rather than making it…

The reason I say that is because the whole thing has just been built up on pure hype – and whilst the method that you’re taught via the program (which is something called dropshipping) is indeed legitimate, it’s much more difficult to make money with than you’re led to believe, and the training provided via the EB Formula website is very poor quality.

So whilst in theory, you could make money with the method of dropshipping, via the EB Formula training it’s unlikely that you will.

What The Heck Is Dropshipping Anyway?

The concept of dropshipping is that you source a supplier of products & then you list them for sale on websites before you actually purchase them – then, as the sales are made you simply place an order with the supplier & get them to deliver it directly to the customer.

For example, you might source a supplier who can provide computers for £500 apiece, so you list them for sale on eBay at a price of £550 – this gives you a window to make £50 profit… Then when somebody purchases one, you place the order & the computer gets shipped straight to the customer. You make £50.

It sounds easy, and it does have some benefits – such as not having to hold any stock, or not having to spend money upfront on stock… but it also has some very big drawbacks which could cause huge problems.

For example, in the instance a customer claims to not have received a product – you have paid the money to the supplier, but now your customer wants a refund… So you could be left to fork the money out of your own pocket.

Similarly, if a customer has a problem with an item, you have all the hassle of getting the product back to the supplier & sorting out the issue – which could also end up costing you a lot of money.

And it’s also very difficult to build a solid reputation as a dropshipper because you’re totally reliant on the supplier in terms of shipping times – which means you could quite easily get negative feedback if they ship something a little late, and then nobody would want to buy from you.

Basically, as I say it seems easy, and it seems profitable – but in actual fact, it’s very tricky.

However the person behind the EB Formula system (who we now know is not really called Dan Wright) doesn’t tell you any of that. He (or she) just wants you to buy the program so that he (or she) can make some money at your expense.

The good news though is that there’s a much better way to make money than dropshipping – it’s called affiliate marketing, and you don’t need to mess around with shipping products or handling refunds or customer service… You literally just promote stuff online for 3rd party companies, they handle all the sales side of stuff & you get to earn the commissions for promoting them… It’s a really good way to make money & you can learn more about it over at Wealthy Affiliate.

But back onto the EB Formula scam…

Yep, that’s right – the EB Formula system claims to cost just $37 but that is far from the truth. You see that $37 fee literally just gets you “through the doors” but most of the material remains hidden away & instead to access it you’re forced to pay hundreds of dollars more…

Simple – I managed to find the EB Formula affiliates page (which tells affiliates how much commissions they can earn for getting people to sign up to it) and it states that affiliates can make up to $228 per sale!

So how can they afford to pay $228 in commissions to affiliates on a mere $37 sale? They can’t – which means they’re clearly charging a heck of a lot more & you can see that for yourself in the pic below:

Is The EB Formula a Scam?

Some would argue that it’s not necessarily a scam because you do get access to some training inside, however, in my opinion, it IS a scam because the whole thing is just flat-out misleading, and it’s very unlikely that you’ll make any money – let alone $3,000+ per day…

And like I said earlier in this review, previously the whole thing was launched under the name of EZ Bay Payday & you were told it had been created by a guy named Steve Richards so clearly the creators have no issues about lying to us which is very worrying indeed to say the least.

So overall it’s safe to say that I won’t be recommending the EB Formula program to you because I don’t think it’ll help you at all – instead, I suggest you just keep hold of your hard-earned cash & give it a wide berth.

Hopefully though after reading this review you can see why I’ve arrived at that conclusion & hopefully this review has given you a good insight into how it all really works. If you do still happen to have any further questions or comments though then don’t hesitate to leave them below. I always respond as quickly as I can.