The EZ Bay Payday system has allegedly been put together by a guy named Steve Richards who claims it can enable you to tap into eBay’s billion-dollar market & begin passively earning yourself hundreds of dollars each day with ease. 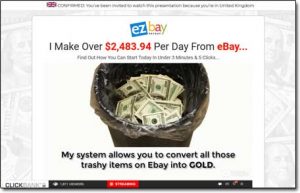 But is it really legit? Or is the EZ Bay Payday system a scam that’ll just end up costing you money instead of helping you make it?

Well, luckily you’ve landed in exactly the right place to find out because I’ve taken a closer look into it personally & in this honest review I’m going to be sharing the real truth about how it all actually works.

Plus I’ll also be determining whether or not you can really make any money with it.

What Is EZ Bay Payday?

So as the name of the system suggests, the EZ Bay Payday system claims to provide an easy way for your to make money from eBay – and it’s said to be using a “secret” that’s been staring you in the face the whole time.

However, despite mentioning over & over again about the “secret” in the video, Steve Richards (the guy who’s allegedly behind the system) doesn’t give you any real information on how it actually works or what you’ll be doing… Instead, just like with a typical get-rich-quick scam, he requires you to hand over your money to find that out.

Now right from the off, I can tell you that’s a huge red flag. I’ve reviewed literally hundreds of different money-making systems here on this blog & if a system requires you to hand over money before telling you how it works, 9.9 times out of 10 you can guarantee it’s going to be a scam.

Couple that with the fact that pretty much every single claim on the EZ Bay Payday website sounds too good to be true (like the fact you can supposedly make $2,483.94 with just 5 clicks) & it’s safe to say it’s not looking promising at all…

But can you make ANY money with it? Or is it really just 100% a flat out scam? Keep reading & you’ll find out as I show you how it all works below…

How Does EZ Bay Payday Work?

Okay so taken from the 20 minutes long EZ Bay Payday system promo video on their sales page, these are the “4 simple steps” that you’re told will allegedly enable you to begin earning hundreds of dollars per day:

However, do you know what’s extremely strange about those steps? The strange thing is the fact that step number 3 is “pick a product”, yet earlier in the video Steve claims it has absolutely nothing to do with selling products.

I have a feeling we’re being lied to! And because of that, I did some additional digging…

Okay so as you probably guessed everything you’re actually told via the EZ Bay Payday website is complete nonsense. As you’ll soon see the whole thing is nothing but a gimmick & there is simply no way you will make money from it.

In reality, it’s been solely designed to make its creator rich at your expense rather than being set out to help you as it claims – and it’s true creator isn’t actually Steve Richards either… As shown below the very well hidden disclaimer on their website reveals that they’ve just used a “pen name” to hide the real person (or people) who’s actually behind the whole thing instead:

If it was truly legit then why would those who created it want to hide behind a fake name? The simple answer is because it’s not legit – the whole thing is just a ploy to trick you into handing over your cash.

You see the whole thing actually revolves around something called affiliate marketing, which is basically where you promote 3rd party products online in return for commissions on any sales you generate.

Now affiliate marketing itself is legit (and it’s actually the same way I make most of my own money online) however the EZ Bay Payday system is extremely misleading & the training they provide you with is total BS.

After you hand over your cash you’ll just be left to find out the hard way that you’ve been conned & rather than being provided with an “automated way to make money from eBay” you’ll just get some very, very basic affiliate marketing training.

Like I said above you can actually make good money from affiliate marketing, and it is actually a VERY good way to make money… But to succeed with it you need proper training, like the training found at Wealthy Affiliate… Not some hyped-up mumbo jumbo like what’s provided to you through the EZ Bay Payday scam.

How They Get Away With It…

You might be wondering how on earth the guys behind the EZ Bay Payday scam are actually getting away with it – well, the truth is even though their system is super hyped-up they’re kinda getting around it on a “technicality”.

The technicality is that you can actually make money through eBay when other people buy products – and you can do this as an affiliate. So you basically sign up to their affiliate program, then if you promote products found on eBay & the person you promoted them to buys something… You earn a commission.

However, the EZ Bay Payday system makes it sound way easier than it actually is. They also state that you don’t need a website which isn’t true either – you DO need a website in order to be accepted to the eBay affiliate program.

They’re basically just doing whatever they can to trick you into handing over your cash, then they provide you with some BS training in an attempt to try & prevent you from getting a refund. By providing you with some training, when you ask for a refund they’ll turn around & claim you’ve already accessed the product & that a refund will no longer be possible.

It’s a common trick pulled by many get-rich-quick scams.

The good news though if you’ve already bought into it is that ClickBank is the retailer for the product. This means that whilst the EZ Bay Payday people might not give you a refund, if you contact the ClickBank team directly (who the product is sold through) they should be able to refund you for your purchase.

ClickBank is usually pretty good when it comes to refunds anyway.

The EZ Bay Payday Scam Has Actually Been Around Before

Whilst taking a closer look at the EZ Bay Payday website I happened to notice something pretty interesting. The “Income Disclaimer” section of all the legal content at the bottom of their site states the following:

easyinstaprofits.com makes absolutely no guarantee, expressed or implied, that by following the advice or content available from this web site you will make any money or improve current profits.

Yup, that’s right – the whole thing is just a re-hashed version of the Easy Insta Profits scam that was launched a few months back. Looks like they forgot to change that bit of text on their website, whoops!

Is EZ Bay Payday a Scam?

In my opinion yes, it is a scam. The reason I say that is because whilst you do get some training provided to you, in reality, you’re tricked into purchasing it & it’s not what you’re expecting to receive. You’re sold an “automated eBay money-making program” and that is what’s provided to you… Therefore, in my opinion, it’s a scam.

As far as I’m concerned the whole thing is just set out to part you with your cash to make its creators rich at your expense & for that reason there’s no way I will be recommending it to you because it’ll just disappoint you & leave you out of pocket.

Like I said earlier in this review if you really want to make good money online with affiliate marketing then you want to get started at Wealthy Affiliate – it’s there that you’ll learn the legitimate ways to do it & it’s free to get started there too.

Overall though whatever it is you decide to do I just hope my review here has helped you out & I hope it was able to help prevent you from falling for the scam & losing your money. If you do happen to have any comments you’d like to add or any questions you feel I didn’t cover then feel free to leave them below & I’ll get back to you as soon as I can.