Send 30 emails & earn $750 per day – that’s what the Email Processing 4 Cash system promises, and if you can stretch to processing 40 per day, well you’re told you can “easily earn $1,000 per day” which I think you’ll agree is a LOT of money. 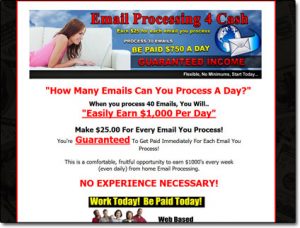 But is it really legit & can you really make money with it as they claim? Or is Email Processing 4 Cash a scam that’s just set out to take money from you instead?

No doubt those are the questions running through your mind after coming across this system.

Well, don’t worry because you’ve landed in exactly the right place to find out everything you need to know. I’ve personally taken a closer look into this system to see how it works & in this review I’ll be uncovering the honest truth as well as determining whether or not you can really make any money with it.

What Is Email Processing 4 Cash?

Email Processing 4 Cash is a new website that promises to provide you with access to a high-paying email processing job that can supposedly see you earning as much as $25 for every single email you process.

But don’t you think it sounds a little bit too good to be true?

I mean why are they willing to pay you so much per email? And where is all of this money supposed to be coming from?

Their website claims (as shown below) that you can earn over $200k by doing this… Right from the comfort of your own home… But if that’s truly the case then why isn’t everybody doing this?

The answer is because sadly the whole system is fake – you will NOT get paid directly for every single email you process like they promise you will, and whilst you can actually potentially make some money through the system, it will be a lot harder than you’re led to believe.

In fact, the truth is that most people who join Email Processing 4 Cash will actually just end up losing money rather than making it.

How Does Email Processing 4 Cash Work?

However in reality that is not the case. In fact, you could actually end up sending thousands of emails & not earning so much as a single penny… Which seems to be what happens to most people.

The reason for that is because rather than being a job like it portrays itself, the whole thing is actually just a cover-up for a cash gifting style pyramid scheme where the money is handed from 1 person to another.

That’s why in order to join the system you have to pay $25 yourself, and you should NEVER have to pay money to get access to a job.

You see when you sign up to Email Processing 4 Cash (which I don’t recommend doing) you’ll be forced to pay $25 & then that $25 will be paid directly to whoever the person was that recruited you.

Then from there in order to actually stand any chance of making money from it, you’ll then be required to recruit other people in & get them to invest just like you did – but this time you’ll earn at their expense.

But the cost doesn’t stop at just $25 – oh no, there are actually several more levels inside of the program which you’ll be told you must upgrade to in order to avoid losing out on commissions… And they can cost you hundreds of dollars.

And the reason not upgrading to them will make you “lost out on commissions” is because the system has been designed so that you can only earn commissions for reselling the level you are personally at yourself.

So, for example, let’s say you’re at the $25 level & recruit somebody who upgrades to the $100 level… You’ll still only earn $25 and the remainder of the money will be passed up to the person that recruited you (or the next person who’s qualified at that level above you).

There isn’t really any product or service or anything (even though they try and claim there is)… The truth is that people are just spending money purely to make money, but sadly most people who join it fail to make anything.

The Whole Email Processing Concept Is Just a Trick

After reading my review here and seeing how it really works you’re probably wondering what the heck it’s got to do with email processing, and the truth is not a lot… That’s just a trick they’ve used to make the whole thing sound easy to get you to sign up.

Instead, after signing up (which again I don’t recommend doing) you’ll just be left to find out that the whole “email processing” side of things basically involves you sending out emails to try & recruit people.

You will therefore NOT be paid directly for each email you send like you’re told on the sales page – you’ll only be paid if someone you send the email to happens to sign up & make an investment.

The problem is though that most of the emails you send will just land in peoples junk folders, and how many people will sign up to a random make-money opportunity that lands in their inbox from a stranger? The answer is next to none…

So you’ll likely just find yourself sending thousands of emails & earning absolutely nothing – you’d just be lucky to not get your email account banned for spamming people, just like I mentioned when I previous exposed the email processing systems here.

And even if you did manage to get people to sign up, the scheme is essentially a pyramid scheme (pictured below) and this type of thing is against the law so any profits you did gain would be short-lived…

Is Email Processing 4 Cash a Scam?

In my opinion, the answer to that question is a huge YES. I mean sure, there is actually the potential to make some money through the system by recruiting others & getting them to invest but it massively resembles a pyramid scheme & it is much, much harder to make money than you’re led to believe.

The truth is that really systems like Email Processing 4 Cash are just geared for making their creators wealthy (and their close associates) rather than the members who they actually get sold to.

And there is also no reason to waste time or money on nonsense systems like this because there are plenty of legitimate opportunities to make money online which you can see a list of by clicking here.

So overall it comes without saying that there is no way I’ll be recommending the Email Processing 4 Cash system to you because as far as I’m concerned it’s just total junk and it will not help you make money at all like it claims – instead it’ll likely just see you losing money which you obviously do not want.

But if you still happen to have any questions or comments about it (or about email processing jobs in general) then don’t hesitate to leave them below & I’ll get back to you as soon as I can.