The Evergreen Wealth Formula 2.0 course has been put together by a guy named James Scholes & it promises to teach you how you can “automate your entire income & finally start generating sales” the very same that you get started. 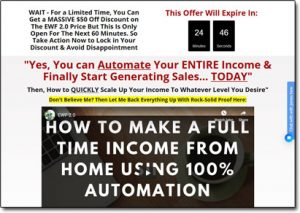 But that’s a pretty bold claim to make, especially since James then goes on to claim that you can use his method to scale your income up to any level your desire.

So what’s the truth about it?

Is it really legit or is the Evergreen Wealth Formula a scam to avoid?

Well, the good news is that you’ve landed in exactly the right place to find out because I’ve personally taken a closer look into it & in this honest Evergreen Wealth Formula 2.0 review I’m going to be uncovering my findings (including the big problems)…

What Is The Evergreen Wealth Formula 2.0?

In short, the Evergreen Wealth Formula 2.0 program is a program that teaches you step-by-step how to make money online, specifically through a combination of 2 methods named affiliate marketing & email marketing.

The course has been put together by a guy named James Scholes and as the name suggests this is the second version of the course. The original one I believe was launched 6 years ago from the date of this one, back in 2013.

But one thing you’ll have probably noticed about it is that it makes some extremely bold claims… For example in the video James mentions that you can use it to make over $1,000 per day with ease, and he even says it will all on happen on autopilot…

But is that really true?

Well no, it’s not – and it’s a little bit disappointing that James has made those claims because both affiliate marketing & email marketing are legit, and his course does have some good training… But it is not going to magically make you money like it leads you towards believing.

But like anything it requires work… You can just expect to sign up to a system, program or course & begin seeing money getting deposited into your account without you having to lift a finger. That’s just a pipe dream & it’s a shame James has chosen to sell his course in that manner.

Don’t get me wrong though James’ course can definitely help you to make money, for sure… All I am trying to say is that it is not going to be anywhere near as easy as he makes out to be in his promotions.

How Does Evergreen Wealth Formula 2.0 Work?

So as I touched on in the previous section of this review the Evergreen Wealth Formula 2.0 course basically teaches 2 things, affiliate marketing & email marketing – but it claims to be all built around automation.

So unlike other programs like Commission Academy for example which teach SEO (getting articles ranked in search engines & getting free traffic), Evergreen Wealth Formula 2.0 doesn’t focus on that.

Instead, James Scholes the founder claims that he will be sharing some “automated traffic sources” with you so that you’ll simply be able to set up a website, load it with “done-for-you” content, add some affiliate links & then begin making money the very same day…

But I can tell you that those claims are extremely unrealistic. As a newcomer, you cannot & should not expect to make money the very same day that you get started… It takes time to learn, implement & then earn.

As far as I’m concerned anything that promises “quick money” is just using trickery to draw you in & ultimately borders on being a get-rich-quick scam.

In this particular instance, James does give you some legitimate training inside which prevents it from being a scam as there is definitely the potential to make money with his method & training, just not as quickly or as easily as he claims.

It’s not all bad with his program though – he has kept things very reasonable with the costs (unlike many other similar programs) as he is selling his course for a flat fee of $197 without any hidden upsells.

However whilst that is good on one hand, on the other hand, the downside is that he doesn’t give you any free trial access or anything like that. You have to pay to see what’s inside… Whereas over at Wealthy Affiliate you can get inside for free.

My Big Concern Regarding This Program

Yes, the program looks sketchy, it makes hyped-up & what I believe are unrealistic claims… But those aren’t the biggest concerns I have regarding James’ program, the biggest one is that the whole thing appears to be seemingly pointless.

You see upon landing on the Evergreen Wealth Formula 2.0 website I began watching the sales video, and then I happened to notice it was hosted on YouTube so I decided to click through to James’ channel to see if he had any other videos.

Turns out he did, he had a LOT of videos & you can see a preview of some of them below: 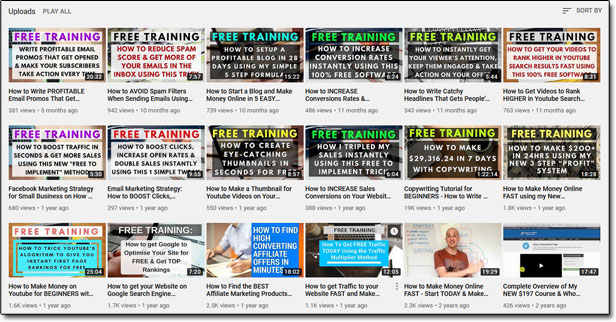 Each of his videos offer free training & some of them are titled as follows:

Those are just 4 of the potentially hundreds of videos he has on there… And now I must ask a question… If those are true then why on earth would you need to pay $197 for his Evergreen Wealth Formula?

And if they’re not true then how can you trust that James’ will provide something real in his Evergreen Wealth Formula program?

There’s either no need to pay the $197, or there’s no way you can trust he will provide quality material in his paid-for course.

But either way, it doesn’t really matter because I myself have put together a free guide on starting a money-making website right here… Or alternatively I would just recommend going through the Wealthy Affiliate course instead of the Evergreen Wealth Formula.

With that being said though I think it’s time for…

Is The Evergreen Wealth Formula 2.0 a Scam?

Well no, it’s not a scam. James does indeed provide legitimate training inside of his course & the methods it is based around (affiliate marketing & email marketing) are both legitimate ways to make money…

However what I will say is that it is extremely over-hyped, the claims made on the sales page are unrealistic & it appears that James has already put lots of similar content out on his YouTube channel which is accessible for free.

Therefore whilst it’s not a scam, I would like to point out that it is going to take a lot more work & time to make money with it than James leads you to believe. I also question if it is really worthwhile too since like I mentioned James has already put a lot of content out for free. Do we really need to pay $197? I don’t think so.

And the whole “automation” thing is just more trickery. Sure, you may be able to work towards building something that becomes passive but it is not just going to start pumping money into your bank from day 1 without you having to do anything.

With all that being said I believe that even though it’s technically legit, you’ll probably be disappointed if you buy into it… So I would recommend you just stick with something that’s proven & that doesn’t make overly-bold claims instead, like Commission Academy.

Whatever you decide to do though I just hope that this review of Evergreen Wealth Formula 2.0 has given you a good insight into how the course really works & why it might be as good as it initially seems. Feel free to leave any comments or questions below if you happen to have anything to add. 🙂