Fast Profits Online (found at FastProfits.Online) is a brand new money-making system that’s just launched with the bold claim of promising that it will be able to make you $1,700 per day without you having to have any previous experience at making money online at all. 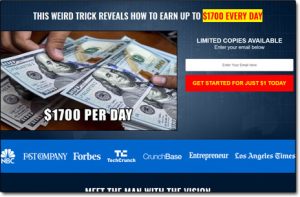 You’re led to believe by its creator Michael Carson that you’ll simply be able to sign up & start profiting right away through some sort of “done-for-you” ecommerce method, but is it really legit & can you really make money with it or will Fast Profits Online scam you instead?

I’m really glad you decided to do some due diligence on it before diving in head first because I can tell you it’s not what it seems & in this honest Fast Profits review I’ll be uncovering the real truth about how it all works & as well as figuring out if you can really make any money with it at all… So keep reading to find out all you need to know.

What Is Fast Profits Online?

As I briefly touched on above Fast Profits Online is a brand new system that’s allegedly been put together by a man named Michael Carson & it claims to provide you with access to a “weird trick” that’ll supposedly see you earning as much as $1,700 per day all on complete autopilot.

The site also claims that there’s only a limited number of copies available & that it’s been endorsed by several news channels – but strangely you’re not told anything about how it actually works until you hand over you cash.

Instead the video on the Fast Profits Online merely keeps hyping up the potential opportunity of making money – it doesn’t actually ever go into detail on the method involved other than mentioning “ecommerce” a couple of times, which basically consists of selling things online…

Well I can tell you right from the off that the reason the method isn’t uncovered before you hand over your money is because the truth is that the Fast Profits Online system is basically just a big get-rich-quick scam.

You know all those news channels it’s supposedly been endorsed by (as shown below)? I checked all of their websites & there’s never been a single mention of the Fast Profits Online system.

Similarly you know how the video starts out by telling you that you’re “lucky” to have found the page & that you must have been specially selected? That’s also a lie – the creators of the Fast Profits system are paying people to promote it & anybody can access it.

These are all just tricks that the creator has deployed in the hope of convincing you to sign up so that he can earn some money at your expense. Naturally though I don’t expect you to just take my word for that so please do continue reading & let me show you how it all really works below…

How Does Fast Profits Online Work?

Well in short the Fast Profits system doesn’t work at all, and whilst it promises to provide you with an easy way to generate easy riches online the truth is the only person making the money from it will be the creator, at your expense.

Then, when you buy in for the dollar (which I don’t recommend doing) you’re presented with a page which tells you that the whole thing involves something called dropshipping – which in itself is technically a legitimate method.

Dropshipping is basically where you find suppliers of products, then you list the products for sale, wait until orders are placed, and then you have the supplier ship the product directly to the customer.

At a glance dropshipping sounds great – it sounds like you couldn’t lose with it & the idea of never having to hold stock or spend money upfront also makes it seem very attractive too… But there are some major drawbacks.

Firstly there is a BIG drawback with the Fast Profits Online system itself – the training it provides you with is so poor that there’s simply no way on earth it will help you find success with dropshipping at all.

But secondly there are also some drawbacks with dropshipping too – like the fact that if the supplier delivers the product late, you get the negative feedback – and if the customer wants a refund, it could end up costing you money since you’ve had to buy it from the supplier.

On top of that dropshipping stores are VERY hard to promote – especially without spending thousands of dollars on advertising, so for that reason alone I would never ever recommend dropshipping to a newcomer.

Overall there’s a MUCH better (and easier) way to make money which is called affiliate marketing. With affiliate marketing you don’t need to buy products or sell them (or talk to customers) – you just connect people with the products they’re looking for (as shown below) and you get paid commissions in return by the companies you send them to.

The other benefit of affiliate marketing is that you can get started with it with no money whatsoever at places like Commission Academy – and also in my opinion it is much easier to scale your income as an affiliate too.

So yeah, the method of dropshipping itself is flawed – but the Fast Profits Online system is just set out to take advantage of people.

Basically once you get inside for that “$1” it just gives you a taster of dropshipping (but it really hypes it up) and then you’re immediately presented with another upsell where you’ve got to spend more money to continue.

On this page Mr Michael Carson states that if you buy the upsell you’ll be much more likely to achieve success… You know – all that BS.

Anyway, like I say at the end of it there is really nothing exciting inside. Sure – you are indeed provided with some training on dropshipping but honestly it is so basic it is not really going to help you whatsoever.

That’s why Michael has had to use so much trickery on the website to get people to sign up. Oh, and whilst we’re on the topic of Michael…

Google invented a great tool a couple of years back, it’s called the Reverse Image Search tool & it basically lets you search using an image instead of text & it attempts to find any matching images…

So guess what I did? I Googled the photo of Michael Carson from the Fast Profits website… And guess what I found?… 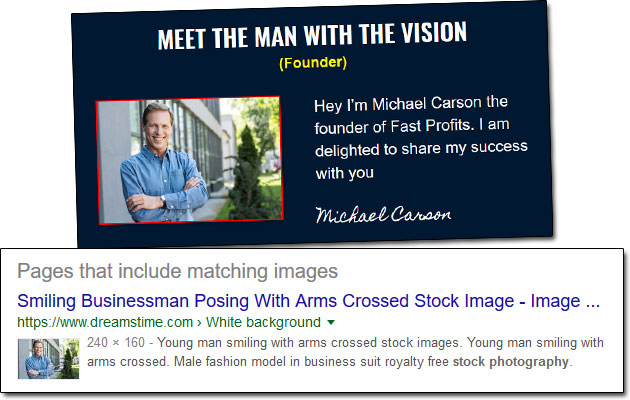 I discovered that “the man with the vision” Mr Michael Carson looks an awful lot like the “smiling business posing with arms crossed stock image” LOL.

So yeah, in short Michael is a fake – they’ve just pulled an image from a stock photo site to try & make it believable.

As to who’s actually behind this thing nobody knows, but I wouldn’t put it past being the same people that just recently launched the Instant Profit Sites scam as that is also being sold through ClickBank too.

Is Fast Profits Online a Scam?

Technically (even though it’s rubbish) you do get access to “some” training after purchasing Fast Profits Online so I guess I can’t technically call it a scam as such, but in my opinion it is extremely misleading & as a result there’s no way I’d ever recommend you join.

It’s quite clear to me that the whole thing has been setup purely so that the creator can just cash in at your expense. He (or she) whoever is behind it doesn’t really care about your success whatsoever.

Like I mentioned earlier in this review though rather than buying into some crappy program like Fast Profits Online & trying to get started with a costly/difficult method like dropshipping you should just get started with affiliate marketing instead.

Affiliate marketing is MUCH easier, much more straight forward & there’s much less hassle involved. Plus like I also mentioned earlier in this review if you get started at Wealthy Affiliate you can get started completely free.

But whatever you decide to do I just hope that my review here has given you a good insight into the Fast Profits system & hopefully you can now see why it should be avoided (and why there’s no way it’ll generate you $1,700 per day like it claims). If you do happen to have any further questions or comments though then don’t hesitate to leave them below & I’ll get back to you as soon as I can.