The Filthy Lazy website (found at FilthyLazy.com) claims it will provide you with access to the #1 internet marketing system which will enable you to earn whilst you learn & give you the ability to work remotely from anywhere in the world. 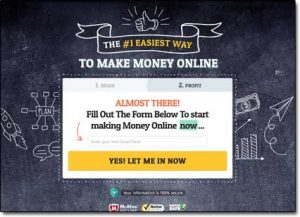 But is actually legit or is Filthy Lazy a scam that’s just going to somehow part you with your cash?

It’s great to see that you’re doing your due diligence before signing up & thankfully you’ve landed in exactly the right place because in this Filthy Lazy review I’m going to be sharing the truth & showing you how the whole thing really works.

What Is Filthy Lazy?

Filthy Lazy is a website which appears to have been put together by a well-known internet marketer named Igor Kheifets. There isn’t actually any reference to Igor on the website itself but after doing my research that seems to be the case.

Igor is most well-known for his “solo ads” service, which is basically a service through which you pay him money & he sends an email out for you to his email list promoting whatever it is you have to offer.

The reason he’s well-known for it is because he has HUGE email lists so his service has become pretty popular because people assume that if they blast their email out to a ton of people it’s gonna make them a ton of cash in return.

Sadly it doesn’t often work out that way for people because there’s a bit more to it than that… But regardless people are always looking for the “easy” route so his service has still remained pretty popular over the years.

Anyway, the reason I’m telling you about all of that is that it ties together with his Filthy Lazy system. The Filthy Lazy system is basically the system he uses to build his email list – and it’s pretty smart.

The downside though is that whilst the Filthy Lazy site helps him build his email list, the chances are it will NOT help you make any money. In fact, as you’ll soon see when I show you exactly how it works the truth is that it will probably just make you LOSE money instead.

Let me show you why…

How Does Filthy Lazy Work?

And that’s exactly what the Filthy Lazy system is designed to do.

As you’ll see when you visit the Filthy Lazy website there isn’t really much you can do – and there are just 2 main steps which are as follows:

And above those 2 steps, there’s a big banner that stresses that the system provides “the easiest way to make money online”… So naturally, the chances are you’re probably going to enter your email to find out what its all about & that’s exactly what Igor wants.

The second you enter your email you will get added to Igor’s email list & you’ll be one of the subscribers that starts getting sent his paid promotions. So when other people come to him & offer him money through his solo ads service to send an email, that email will be getting sent to YOU.

But the important bit about it is the way Igor is getting visitors to his Filthy Lazy page. He’s doing that by paying for advertising on sites like Facebook, Instagram, Google & even by paying for solo ads himself.

However, this is costly & if he was just capturing emails he likely couldn’t guarantee that he’d be able to turn a profit. After all what if he pays for a visitor to come to the page and they don’t enter their email? He loses money.

So the Filthy Lazy website is all about maximizing his return on investment, and that’s why you’ll probably notice that when you visit the site you’re presented with several offers when you try & exit. You’ll also have noticed if you entered your email address that the same story happens again – you get presented with an offer & then several more if you try & exit.

This is basically Igor’s way of maximizing his profits from his advertising – and all of those offers that you’re getting presented with are completely random. Sadly, many of them like the Money Sucking Websites offer are flat-out scams.

All Igor is interested in is who will pay him the highest amount of money per click to feature on his Filthy Lazy site so that he can boost his ROI on his advertising as high as possible. He doesn’t seem to be bothered what the opportunity entails & that’s why a lot of the offers are just over-hyped get-rich-quick scams.

But how can the website make those claims when the websites it redirects you to are totally random?

It can’t! So those claims should be taken with a total pinch of salt. As far as I can see from the systems I was presented with when visiting the Filthy Lazy website they were some of the worst money-making offers ever.

If you happened to sign up to any of the ones that were promoted when I visited the site you’d have just lost money, not made it.

Like I say it seems Igor doesn’t really care about the visitors to his Filthy Lazy website, it just seems all he wants to do is get them to enter their email or make some money from (any way possible) if they don’t so he can balance his advertising campaigns out.

Is Filthy Lazy a Scam?

Well, it’s not really a scam, I mean essentially the Filthy Lazy website is just a one-page website that redirects you through to a bunch of others… It’s just a “trick” for Igor to get you to enter your email…

But the not-so-good news is that whilst there are potentially some legitimate opportunities advertised through the Filthy Lazy site (unlikely) from what I’ve seen most of them are flat-out scams that will just result in you losing money.

And ultimately, in my opinion, there is just no way any good can come from you visiting the Filthy Lazy website & entering your email. All that’s going to happen is you’ll end up getting bombarded with spam from Igor’s solo ad service.

So overall I am not going to recommend the Filthy Lazy site to you and instead if you’re looking for a real way to earn money online I suggest you just go and check out a legitimate opportunity like Commission Academy instead.

Whatever you decide to do though I just hope that my review here has given you a good insight into how the Filthy Lazy system all works & hopefully you can see why I’ve come to the conclusion of not recommending it.

If you do still have any further questions though that you feel I haven’t answered then don’t hesitate to leave them below & I’ll get back to you as soon as possible.