FundsPay claims to be a short term, stable investment company & through it you’re led to believe that you can see insane ROI’s of up to 400% after just 48 hours of depositing your money, all allegedly without any risk. 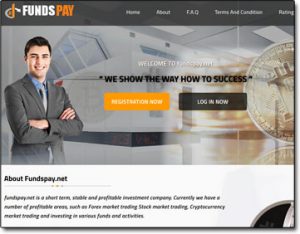 But obviously those super high ROI’s will probably make you sceptical about the whole thing… So what’s the deal?

Is it actually legit or is FundsPay a scam that’ll just see you losing money rather than making it?

Thankfully you’ve landed in exactly the right place to find out because I’ve taken a closer look into it & in this review, I’ll be uncovering everything you need to know including how it all works & whether or not you can actually make any money with it.

FundsPay is one of the latest cryptocurrency-based money-making opportunities to surface & it’s launched with some extremely bold claims – such as that it can generate up to 400% ROI within just 48 hours of investment.

Now, remember the good old saying “if it sounds too good to be true, it probably is“? Well yeah, that definitely applies here… I can tell you right from the off that the FundsPay program is NOT what it seems.

The creators claim that they’re able to generate you these insane ROI’s because they have a skilled team of experts who will tactically trade your money on the Forex, stock & crypto markets to generate profits…

But in reality that’s not the case – the whole things just a blatant Ponzi scheme & there isn’t any trading or “investment management” going on at all. Instead, it’s all focused around recruitment & the only money coming into the company is that getting paid in by new unsuspecting investors.

This means that it will inevitably collapse & those who’ve got money invested will lose everything… Just like we seen happen with BitConnect which was a very similar scheme to FundsPay, only a little more convincing.

However I don’t expect you to just take my word for all that – I appreciate that it might be the first time you’ve come across something like this & you might have been hoping it would work for you, so instead let me show you how it all actually works so you can see for yourself exactly what’s going on (and why it’s not really as good as it seems)…

Essentially FundsPay lies about how they generate their promised ROI’s. They tell you that they trade your money to generate profits but this is not the case, there is no trading going on at all.

Basically you sign up to FundsPay & you choose 1 of the 4 packages which I’ve outlined below:

Obviously it would seem to make sense to pick package 4 over the others, however, in order to do that, you must invest more money, which ultimately since it’s a Ponzi scheme introduces a whole load more risk.

But anyway once you’ve invested (which I don’t recommend you do) FundsPay claim to begin trading with your cash to generate your profits. In reality, this isn’t the case… You generating profits – or even just getting your initial investment back is solely reliant on new members signing up to the scheme just like you did… Because the money they invest is simply getting passed up to members already inside of the scheme.

This is the only new money coming into the company & so if new members stop signing up, you don’t make any money…

And if new members happen to stop coming in whilst you’ve got money invested guess what happens? Yup, you lose your investment. So these things can seem good, but in reality, they’re extremely risky.

So risky in fact that they’re just totally not worth it.

That’s Why You Get Pressured Into Recruiting…

Since the scheme staying active is solely reliant on new members coming in you’ll find that once you’ve invested money (which again I don’t recommend you do) you’ll then be pressured into recruiting others.

The creators promise that if you refer others then you’ll be able to get paid a percentage of whatever money they happen to invest & these commissions are paid out over multiple levels… You know, like a pyramid scheme.

Here’s a breakdown of what they claim to pay for referrals:

So if you’re good at recruiting you may be able to make a bit of money here, but ultimately the way you’re making money is by suckering others into a scheme that will likely result in them losing their cash… Something I really hope you wouldn’t want to do.

The Stats Tell You Everything…

All of the FundsPay packages claim to offer insane ROI’s, with the smallest ROI offered being 11% per hour for 12 hours… So if that’s actually true then why do the statistics on the home page look like this: 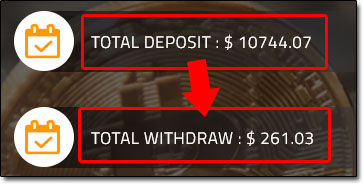 You do the maths – it doesn’t add up.

The only person really making money through this thing is the creator. Sure some people who got in super early may make a little bit of money too, but the rest of the people looking at it (like you) will only end up losing money instead… So don’t let yourself get drawn in by it because it’s nothing but bad news.

In my opinion yes it is, because as far as I’m concerned it shows all the tell-tale signs of a classic cryptocurrency Ponzi scheme & if you invest in it then you will likely only end up losing money rather than making it.

The truth is the FundsPay website has been set up purely to make the creator wealthy & the creator only. He (or she) doesn’t really care about your success – they just want to make money at your expense.

Therefore overall I’m not going to be recommending FundsPay to you because there’s simply too much risk involved. If you really want to learn how to make money online properly (without stupid upfront risky investments) then I recommend you check out my top picks here.

But anyway hopefully my review here gave you a good insight into the FundsPay program & I also hope it helped save you some cash. If you do happen to have any further questions or comments though then don’t hesitate to leave them below.