The FX Revenge trading system has recently been launched by a guy known as “Dollar Bob” it claims to provide you with an easy way to make as much as $2,621 every day from the forex markets, even if you’re a total newbie. 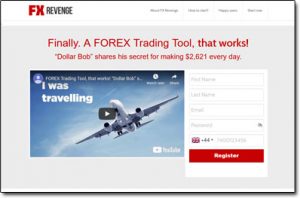 You’re led to believe that you can simply sign up, deposit & “copy signals” to enjoy almost near-guaranteed profits.

But is it actually legit or is FX Revenge a scam that’s just set out to part you with your cash?

Well, I’m glad you came here to this FX Revenge review before signing up to it because I can tell you right from the off that the whole thing is NOT what it seems – and “Dollar Bob”  (or Robert M. Parker) isn’t even real.

What Is FX Revenge?

As I very briefly touched on above, FX Revenge is the name of a new trading system that has allegedly been launched by a man named Robert M. Parker (supposedly known as Dollar Bob) & it claims to provide you with a really easy way to make lots of money.

In the video promoting the FX Revenge system “Dollar Bob” claims to have stumbled across a secret to take on the forex markets & he claims that the secret has been responsible for him generating $2,621 every single day.

He now claims that he has decided to take things one step further & instead of enabling just himself to profit from this so-called “secret”, he has decided to build a system – the FX Revenge system to enable others to copy his trades.

So you’re led to believe that you can simply sign up, deposit some money & copy Dollar Bob’s signals to enjoy profits of up to $2,621 per day for yourself…

But that all just sounds a little too good to be true, doesn’t it?

I mean come on, if the FX Revenge trading system really works as Robert M. Parker (the founder) claims it does then why isn’t everybody using it? Why are still people working at jobs they dislike for less money if they can make more on autopilot using Dollar Bob’s system?

Sadly the answer is because the FX Revenge system is a scam.

The reason I can say that so confidently is because it’s what’s known as a binary options scam and I’ve exposed literally hundreds of these types of scams in the past, such as AI Stock Profits, Cyber Security Profits & iProInvestor.

They launch with extremely bold claims but they never deliver on them – instead, the people who join only ever up losing money whilst the people behind them end up profiting at their expense.

And you don’t have to just take my word for that, instead keep on reading & I’ll show you exactly how it all really works below…

How Does FX Revenge Work?

So “Dollar Bob” – the guy you’re told is behind the FX Revenge system claims that all you need to do is sign up, deposit some money with the broker that he recommends & then “copy signals” to enjoy huge profits.

However, there’s one very important thing which the FX Revenge website fails to make clear & that’s the fact that the person behind it (who isn’t really “Dollar Bob” or Robert M. Parker) is affiliated with the broker that you’re recommended.

This means that when you sign up with the broker & deposit money, the person behind the FX Revenge system gets paid a commission at your expense.

Here’s proof of that affiliation in the very small disclaimer text at the bottom of the FX Revenge website:

Now, in general, this tactic of earning commissions isn’t necessarily wrong – it’s called affiliate marketing & it’s actually the method I use to make most of my own money online… BUT the way that FX Revenge is doing it is VERY wrong.

The reason I say that is because the whole FX Revenge system is a phoney & it has purely been designed to trick you into depositing with the broker so that the person behind it can make a commission. The whole thing is built upon lies.

Now ask yourself this – why would a binary options broker who only makes money when you lose money, pay commissions to the person behind a system that can supposedly generate you guaranteed profits?

They wouldn’t, no way – because such a system would put them out of business overnight.

The real reason that they’re paying commissions to the person behind the FX Revenge trading system is because they are in cahoots with the creator of it & they know that it’s going to make you lose money (and lots of it).

What’s worse is that the binary brokers recommended via FX Revenge are unlicensed brokers – meaning they’re operating illegally… And it also means that if you run into problems (which you will) it’ll be nearly impossible to get your money back.

But The Trickery Only Gets Worse From There…

However, unfortunately, the scam is actually much more cunning than that.

You see if you do happen to get caught out by the FX Revenge scam & you make a deposit, you’ll learn that that’s only the beginning of the scam.

The creator of it has actually created a fake trading system which has been designed to make you think that you’re profiting… So after depositing it will seem like it’s really working & you’ll be encouraged to deposit even more money.

The problem here though is that it’s NOT really working – the “system” is basically just a video game because it’s not really connected to any live markets… The whole thing is just a trick to keep you depositing more money.

You’ll only really be left to find out that it’s a scam when you try to make a withdrawal. Firstly you’ll be encouraged to keep trading & withdraw later… But when you finally push for it you’ll realize that your request simply gets ignored or refused.

Or worse, the broker may ask for a payment to “release your withdrawal”… But this is just a further part of the scam.

Remember, as I said earlier in this review the broker is unlicensed – they’re operating illegally & they’re in on the scam too… Sadly though this is why many people get caught out because they don’t realize that.

Is FX Revenge a Scam?

The FX Revenge trading system is definitely a scam. The whole thing is just a trick – it’s been built upon lies & deceit & its sole intention is to trick you into parting with your cash so that the person behind it can get rich at your expense.

There are many signs that the FX Revenge system is a fake, such as the fact that it’s simply “too good to be true”, the fact that the broker is affiliated with the system & the fact there have been many similar systems before it making the same claims – like iProInvestor etc.

It, therefore, comes without saying that I will be advising you steer clear of the FX Revenge system because any money you deposit via it you will just lose – there is NO way that you will make any money from it.

Instead, if you really want to make good money online I would advise you to stick with one of these legitimate methods.

Or you could also check out the same way that I make most of my own money online which is something called affiliate marketing. In my opinion that is one of the best methods there is & you can get started with it for free over at Commission Academy.

But whatever you decide to do I just sincerely hope that my honest review of FX Revenge here has given you a good insight into how it really works & I also hope that it has helped you to save your cash.

If you have any further questions or comments then don’t hesitate to leave them below. 🙂