AI Stock Profits is the name of a brand new system claiming to provide a “secret income opportunity” which can allegedly generate you as much as $2,500 per week by trading artificial intelligence stocks on your behalf. 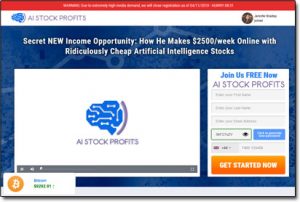 You’re led to believe that the system has been designed by a former hedge-fund manager & you’re told that it’s even free to use.

But is it actually legit? Or is AI Stock Profits a scam that you should avoid?

Well, I’m glad that you came here to this AI Stock Profits review before you joined because I can actually tell you right from the off that the whole thing is NOT what it seems – it’s actually a pretty dangerous system.

What Is AI Stock Profits?

AI Stock Profits is an automated trading system (or at least it claims to be) and it promises to provide you with a way to make lots of easy money online – even if you’re brand new & don’t happen to know the first thing about trading.

You’re told that you can simply sign up for free, deposit some money, activate the system & then begin seeing profits of up to $2,500 per week all on complete autopilot.

According to the software’s creator (who remains anonymous), the system uses “highly accurate profit signals” which supposedly detect trends in the artificial intelligence markets enabling you to make near-guaranteed profits.

And the system even claims to have been featured in several high profile publications such as Forbes, CNN, Time & the Financial Times as shown below:

But there’s one problem, which is the fact that the whole thing simply sounds WAY too good to be true.

I mean if the AI Stock Profits system can really generate such guaranteed profits as it promises it can then why isn’t everybody using it? Why are people still working at jobs they dislike for less money?

Well, the answer, in short, is because it DOESN’T work as promised. The AI Stock Profits system is actually just a scam that’s set out to part you with your hard-earned cash. The system won’t make you a penny.

And the reason I know that is because I’ve actually already exposed this same system several times before under various different names such as Cyber Security Profits, iProInvestor & Crypto Legacy Pro.

The person (or people) behind it simply keep on changing its name in an attempt to escape the negative reviews that out it as a scam (like mine) so that they can continue tricking more people into signing up to it.

But how does it really work? How does the scam work? And is there any money to be made? Keep on reading because that’s exactly what I’m going to be explaining in the next section of this review…

How Does AI Stock Profits Work?

So you’re told by the AI Stock Profits website that you simply need to sign up, deposit with the broker that’s “recommended” to you & then activate the system in order to begin making money… But that’s NOT really how it works.

Instead, the whole thing is actually just a big con to trick you into depositing with an unlicensed binary options broker.

You see there’s one very important thing which the AI Stock Profits website fails to mention & that’s the fact that the person behind it is affiliated with the brokers that are recommended to you… Meaning if you deposit with them, they get paid a commission at your expense.

And remember how I mentioned above that the website claimed to be featured in the likes of Forbes, etc?

Well that’s a lie too – in fact, Forbes actually published an article warning against the dangers of such binary options websites as shown below:

The problem though is that binary options trading is made to seem simple… It’s a wolf in sheep’s clothing.

However, because of many high profile publications such as Forbes warning against the dangers of it, many people stopped getting involved with binary options – but this hit the industry hard… They started losing money.

So what did they do to keep people depositing & losing money? They created fake systems like AI Stock Profits, or they affiliated themselves & paid commissions to the people that created them.

Literally everything you’re told on the AI Stock Profits website is a lie & its sole intention is to trick you into making a deposit. The whole thing is just a re-hashed version of the Cyber Security Profits scam I previously exposed.

But There’s Much More To The Scam…

You might be thinking that after depositing the money like you’re told to do you’ll just be left to find out the hard way that the whole thing doesn’t really work as promised but unfortunately the scam is actually much more cunning than that.

You see rather than just letting you discover that it doesn’t actually work right from the off, the creator of AI Stock Profits has a better idea… He has actually gone to the lengths of creating a fake system that makes you think it’s actually working.

So after depositing you’ll get access to a system & it’ll appear to be making profitable trades on your behalf. Your account balance will go up accordingly & you may be thinking that you’re getting rich… But you’re not.

The problem is that the AI Stock Profits trading system isn’t actually connected to any live markets. It’s basically just a video game & it’s just a trick to encourage you to deposit more so that the person behind it can earn more commissions.

You’ll only be left to realize it’s all been a scam when you finally push for a withdrawal & realize it never comes. The broker (who is also in on the scam) will either ignore your withdrawal request, refuse it or ask you to deposit even more money to “release it” (which is of course just a further part of the scam).

The reason these types of binary options scams catch so many people out is because they make themselves seem “risk-free”. They lead you towards believing that you can just deposit, try it out & then withdraw your money if it fails to work as promised.

What they don’t tell you though is that the brokers are in cahoots with it & that they’ll make it next to impossible for you to get your money back… So basically any money you deposit will be gone for good.

And here’s an example of the trickery used, take a look at the image below which is a screenshot from the AI Stock Profits website:

The image shows a countdown timer that’s displayed on the AI Stock Profits website which claims that registrations will be closing… However, I actually came across the system yesterday & it said the exact same thing.

The counter is 100% fake & it is just used for false scarcity. The person behind it wants to rush you into signing up so that you don’t feel like you have a chance to look for reviews.

They know that if you find reviews, you’ll find out it’s a scam…

Is AI Stock Profits a Scam?

I’m sure you can see after reading this AI Stock Profits review that yes, there’s no doubt about it – the AI Stock Profits system is 100% a scam. Its sole intention is to trick you into parting with your cash so its creator can get wealthy at your expense.

The entire thing is built upon lies & what the website fails to mention is that the AI Stock Profits creator is in cahoots with the unlicensed binary options brokers that are recommended to you. They’re in on the scam too… It’s NOT risk-free like you’re led to believe.

You see what you must understand is that whilst the internet provides many legit ways to make money it is not magical & none of the methods are going to see you earning lots of money with little to no work. That’s just a pipe dream.

The good news though is that if you are prepared to put in the work then there are ways that you can earn a full-time income online.

One of the ways that I highly recommend which is actually the same way I make most of my own income online is something called affiliate marketing & if that’s something you’re interested in you can get started with it over at Commission Academy.

But whatever you decide to do I just sincerely hope that my honest review of AI Stock Profits here has given you a good insight into how it really works & I hope it has helped you avoid losing money to it.