Cyber Security Profits is the name of a new trading system which has supposedly been put together by a Wall Street genius & it promises to provide you with a way to be able to earn as much as $5,000 per day from cybersecurity stocks. 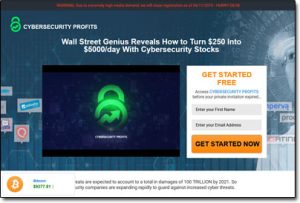 The person behind it (who remains anonymous) claims that you simply need to sign up & deposit $250 – and that once you do the system will then begin making money for you entirely on autopilot.

But is it really legit? Or is Cyber Security Profits a scam?

Well, I’m glad that you decided to ask the question & came to this Cyber Security Profits review before signing up to it because I can tell you right from the off that the whole thing is certainly not what it seems.

What Is Cyber Security Profits?

And what’s more, it claims that it can do all of that for you on autopilot.

You see the Cyber Security Profits system is an automated trading system & it is supposed to use “laser-accurate trading system” to be able to generate you guaranteed profits by trading cybersecurity stocks on your behalf.

The person behind it all (who remains anonymous) claims that he (or she) has chosen cybersecurity stocks because the industry is apparently booming at the moment & many small companies are allegedly being snapped up by the big fish, increasing the value of their stocks.

So the idea is that you’ll be able to buy cybersecurity stocks for pennies & then profit by having the Cyber Security Profit system trade them on your behalf when they’ve increased in value.

But there’s one thing that really concerns me – which is the fact that if this system really works then why isn’t everybody using it?

Why are people still working at jobs they dislike for less money if they could simply plug into an automated trading system and earn as much as $5,000 per day without actually having to do anything?

There has to be a catch, right?

And yes, unfortunately, there is a catch – the catch is that the Cyber Security Profits system is actually just a scam. It doesn’t really work the way you’re told & instead it’s just set out to part you with your hard-earned cash.

I can say that really confidently because I’ve actually seen this exact same scam several times before. The person behind it simply keeps on changing the name of it to escape the negative reviews so that he (or she) can catch more people out… And that’s why the creator has chosen to remain anonymous.

Some of its previous names include iProInvestor, Bitcoin Billionaire & Profit Revolution…

But how exactly does the scam work? And can you make any money with it? Keep on reading because that’s exactly what I’m going to explain next…

How Does Cyber Security Profits Work?

So as I briefly touched on above the idea is that you sign up to Cyber Security Profits, deposit some funds with the “recommended” broker & then activate the system to have it trade cybersecurity stocks on your behalf.

The website promoting the system claims that because the stocks are being bought so cheaply, it is nearly guaranteed that you will make a profit every single time – and that you’ll earn up to $5,000 per day as a result.

But this is all complete BS. You won’t earn so much as a single penny through Cyber Security Profits & that’s because the whole thing is a fake.

You see there’s one very important thing which the Cyber Security Profits website fails to make clear to you which is the fact that it is affiliated with the binary options broker that you are “recommended”.

This means that when you sign up & deposit with the broker, the creators of the Cyber Security Profits website get paid a commission at your expense.

And they also fail to tell you that the binary options broker they recommend to you is unlicensed, which means that it is operating illegally & it also means that if you run into problems (which you will) then you’ll find it next to impossible to get your money back.

The reason I say so confidently that you’ll run into problems is that the Cyber Security Profits system is actually designed to make you LOSE money… And that’s the reason the broker that has affiliated themselves with it.

You see binary options brokers like IQ Option (which is what you’re recommended) don’t add fees to their trades. This means that they only earn money when you lose money – and if you win money then they actually lose money instead.

So it’s in their interests for you to lose…

Now with that in mind ask yourself this – why on earth would a broker who only makes money when you lose money pay commissions to the creator of a system which could supposedly guarantee you automated profits?

But The Scam Actually Gets Much Worse…

You might be expecting me to tell you that after depositing with the “recommended” broker you will simply be left to find out the hard way that the whole thing doesn’t actually work as promised… But sadly the scam is much more cunning than that.

You see the creator of the Cyber Security Profits system has actually created a fake trading system which makes it seem like you’re actually profiting from the cybersecurity stocks – but it’s all a fake.

Unfortunately, though the system isn’t really connected to any live markets – it’s all just essentially a video game & you’ll only find out you’ve been scammed when you actually try to withdraw the money you’ve “earned” and realize you can’t.

The broker is operating illegally and they will either ignore your withdrawal request, point-blank refuse it or they may even ask you for more money to “release it” (which is just a further part of the scam).

Well obviously there’s the fact that as I’ve mentioned throughout this review it’s simply WAY too good to be true, but on top of that, there are also a few other things that prove it’s 100% fake…

The first thing that proves it’s not real is the fake scarcity timer at the top of the Cyber Security Profits website (shown below):

The reason I say that proves it’s fake is because I actually came across the system yesterday & it said the exact same thing, only the date was different – it claimed that registrations would end yesterday… Now it’s changed.

It’s simply just a scarcity tactic used to trick you into signing up quickly. The person behind it is just trying to prevent you from looking for reviews because he (or she) knows that if you do, you’ll find out that it’s a scam.

On top of that though there’s also the fact that the Cyber Security Profits website displays NO license information which is a requirement by law for investment-related websites to have & display.

I searched various financial regulatory registers & found absolutely no mention of Cyber Security Profits which reveals that it’s not actually licensed & you should NEVER deposit money via an unlicensed investment website.

Is Cyber Security Profits a Scam?

Yes, the Cyber Security Profits system is definitely a scam. The whole thing is a fake & it has been designed with the sole intention of parting you with your cash to make its creator (and the affiliated broker) wealthy at your expense.

You will NOT make any money as a result of trading via the Cyber Security Profits system.

Instead, if you truly want to make good money online I suggest you stick with one of these legitimate methods instead. They are proven to work & they will not result in you getting scammed like participating in the Cyber Security Profits program will.

I’ll also point out here that my personal favourite way to make money online is something called affiliate marketing. It’s the same way I personally make most of my own money online myself & it simply involves you promoting products or services in return for commissions.

If that sounds like something you might be interested in & you’d like to learn more about it or get started with it yourself then I’d highly recommend you check out Commission Academy. You’ll get everything you need there.

Or as I say feel free to check out all these other legit ways of making money.

But whatever you decide to do I just hope that my review of the Cyber Security Profits system here has given you a good insight into how it really works & I hope that it has helped you to save your money.