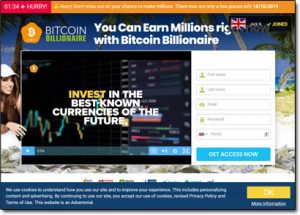 Well, you’ll be glad that you decided to do your due diligence before signing up & landed here at this review first because those are exactly the things I’m going to cover & I can tell you right from the off that the whole thing is NOT what it seems.

What Is Bitcoin Billionaire?

The Bitcoin Billionaire system basically portrays itself as being a system that can allegedly see you earning an automated (and large) income from the cryptocurrency named Bitcoin which you’ve no doubt likely already heard about.

It’s true that many people did indeed make millions in Bitcoin because they invested it in many years ago when it was almost worthless, and then when it’s value saw sharp increases a few years back they cashed in a healthy profit…

However now with the price of Bitcoin at a price of around $8,000 per coin it is out of reach for most people to invest in & this is where the Bitcoin Billionaire system comes into play because it claims to have a way for the “average Joe” to make millions from Bitcoin.

The idea is that all you need to do is sign up to Bitcoin Billionaire, make a small deposit & then “activate” the system. You’re then led to believe that the system will make automated trades on your behalf which are guaranteed to be profitable, thus supposedly generating you a healthy return.

However whilst all that sounds good in theory, what I can tell you right from the off is that it’s all a lie. The Bitcoin Billionaire system is actually nothing but a dishonest scam & rather than help you to make money it will really do nothing other than make you lose it.

But how can I say that so confidently I hear you ask?

The person behind it (who remains anonymous) keeps on changing the name & appearance of the scam in an attempt to escape the negative reviews & trick people into continuing to hand over their cash, however, the scam remains the same.

And you don’t have to just take my word for it, instead keep on reading and I’ll show you exactly what’s really going on inside…

How Does Bitcoin Billionaire Work?

Well like I mentioned in the previous section of this review the concept is that you’ll be able to simply sign up to the Bitcoin Billionaire system, make a small deposit with the “recommended” broker & then activate the system to begin making money.

However, that’s not true…

In reality, the whole thing is actually just a ploy because what the person behind the Bitcoin Billionaire system fails to tell you is that he is affiliated with the broker that he “recommends”, which means when you sign up & deposit he gets paid a big fat commission.

Everything you’re told on the Bitcoin Billionaire website is all lies, the whole thing is fake & it’s all just a trick to get you to make that deposit so that the person behind it can earn some money at your expense.

I mean think about it – if this system really worked then the world would be in crisis. Nobody would be left working a job – everybody would just be sitting at home & generating an automated income instead.

Now don’t get me wrong here, it is definitely possible to make money online however what you have to understand is that whilst the internet provides many ways to make money, it’s not magical & none of them are going to see you getting rich without doing anything.

Sure – you could make a passive income, but in order to do so, you must initially be prepared to put in some work to build it up. It’s not just going to happen with the press of a button like the Bitcoin Billionaire system claims it will.

The good news though is that if you are prepared to actually put in the work required to make it happen then there are indeed legitimate places where you can get started, such as Commission Academy for example.

But back onto the Bitcoin Billionaire system, there is actually more trickery going on even after you deposit…

You see if you think that you’ll just be left to find out the hard way after depositing that the whole thing doesn’t really work as promised then think again because sadly the scam is much more cunning than that.

So as you now know after reading this review, the Bitcoin Billionaire system doesn’t really work as promised… It’s not going to make you money like it claims & it’s just going to result in you losing money instead.

But the problem is that the system itself has been built in a way to make you think that you’re actually profiting in order to make you keep depositing more & more money so that the people behind it can earn more at your expense.

You see you might have just been assuming that after depositing you’ll just be left to find out the hard way that it doesn’t really work but no – instead the person behind it has created a fake trading system.

The system isn’t actually connected to any real markets, but it looks very convincing & to the unsuspecting eye it could seem like the real deal.

So after depositing your money, you’ll activate the system & it will appear like you’re making good money. Then the people behind it will encourage you to deposit even more & more to gain bigger & faster profits.

Sadly though like I say it’s all a con & you’ll only be left to discover the hard way that it’s all been a con when you finally push for a withdrawal from the broker… And this is when you’ll realize that the broker is in cahoots on it too.

Instead of letting you withdraw your money the broker will either ignore your request, point-blank refuse it, or attempt to get you to deposit even more money in order for them to cover a “processing fee” – which is just a further part of the scam.

Basically, in short, the entire thing is just a con, and there is 1 thing which PROVES it doesn’t work…

The Proof That It Doesn’t Really Work

The proof that it doesn’t really work is literally in the fact that the person behind the Bitcoin Billionaire system is getting paid commissions by the broker that he’s recommending to you.

This means that it’s in the broker’s interests for you to lose money because if you win money it means that they themselves actually lose money since they have to pay you your money back plus a bonus.

So ask yourself this – why would a binary options broker that only makes money when you LOSE money pay commissions to the person who is behind a system that can supposedly generate you guaranteed profits?

It doesn’t make sense right? And the reason is simple – it’s because the broker knows that the system is actually just going to make you lose money – and lots of it. They’re both in on the scam together.

And if you need proof that they’re in cahoots just take a look at the screenshot of the disclaimer at the very bottom of the Bitcoin Billionaire website below (which they’ve hidden in extremely small text):

Is Bitcoin Billionaire a Scam?

Yes, there’s absolutely no doubt about it, the Bitcoin Billionaire website is a deceitful website that has been set up purely to trick you into depositing with an unlicensed binary options broker that is going to do nothing other than part you with your cash.

And as if that wasn’t bad enough on its own, the website has also been set up in a way to make you think that it’s actually working to trick you into depositing more & more money when in actual fact the whole thing is fake. The system isn’t really connected to any live markets… It’s just like a video game.

So it comes without saying that you should definitely avoid the Bitcoin Billionaire system and instead if you truly want to make good money online then I would advise that you just stick with one of these legitimate & proven methods.

I’ll point out here though that the way I personally make most of my own money online is through something called affiliate marketing & that’s one of my top recommendations for anybody new looking to get started.

The reason I like affiliate marketing so much is because the amount you can earn is totally uncapped and programs like Commission Academy make it very easy for people to get started & see success with it.

But whatever you decide to do I just sincerely hope that my review of Bitcoin Billionaire here has given you a good insight into how the system really works & I hope it has helped you to save your money.