A short while ago I published a review on this blog of some so-called “Guaranteed Oil Pension Checks” – and here we are once again with another hyped-up offering from the same company Lombardi Publishing Corporation, this time though under the name of Insurance Return Checks… 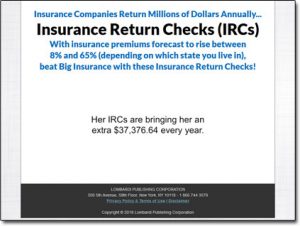 But are Insurance Return Checks real? Are they legitimate? And can you really make money from them as easily as Lombardi Publishing promise you can? Those are exactly the things I’ll be uncovering right here in my detailed review.

What Are Insurance Return Checks?

However the concept behind the Insurance Return Checks that they briefly talk about in their sales presentation video (the video that attempts to sell you into their newsletter) does indeed exist… Though as you’ll soon enough find out in this review it is NOT as good as it initially seems.

In fact whilst you can potentially stand to make money from these so-called Insurance Return Checks, you could also stand to lose money – and a lot of it too. They are certainly not a “sure-fire” way to make profits.

As a result it’s allegedly been “returning millions of dollars to people in secret”, and you’re told that some people like Lisa – a lawyer, have been earning as much as $37,000+ per year from these so-called IRC’s as shown below:

I think you’ll agree that that’s a pretty outrageous sum of money, especially since the website almost leads you towards believing that this is merely a second source of income that you can quickly & easily get access to at no cost…

But the disappointing truth is that this is not such an “easy” source of income, and it is certainly not a source of income that is achievable without upfront cost as you’ll soon see in just a moment.

How Do Insurance Return Checks Work?

At a glance these Insurance Return Checks certainly seem fantastic, but the reason for that is because the checks are really just all a part of Lombardi Publishing’s marketing ploy – a ploy to encourage you to sign up to their payment-based newsletter.

They essentially give you a hyped-up taster about these said checks & then push you towards subscribing to their newsletter to a fee, where they then leave you to discover that the IRC’s are not quite what they were made out to be.

A financial professional named taxmanrog on JustAnswer agrees with me on that too – as when questioned by somebody about the Insurance Return Checks (and the Oil Pension Checks) he gave this answer:

He states the rate of return on the checks is usually 4% to 5% which means that to profit to anywhere near the level that Lombardi promotes you will you’d need to invest well in excess of $200,000… And remember, your money is at risk with this type of investment too.

Furthermore whilst the checks are promoted as being some sort of mere check that you’ll be paid without doing anything – a check you’re almost entitled to as an American citizen – that’s clearly not the case.

These “checks” are nothing more than mere investments, and like I mentioned the whole “check” concept is just a mere part of the marketing ploy. They want to make it sound easy so that you’ll subscribe to their newsletter, that’s the aim of their game… And that’s what the people behind Insurance Return Checks are very good at it.

Whilst Lombardi Publishing Corporation is the company mentioned on the promo material on the sites promoting these checks, if you dig a little deeper you’ll find out that Lombardi is actually part of Agora Financial…

For some, finding out that alone will be “enough said”…

But anyway, back onto the financial professional taxmanrog – he also makes another good point in the answer he posted which is shown below:

He also proceeds to state that “there’s no such thing as a free lunch“, and that couldn’t be more true.

The next page I was taken to contained even more hype, this time in written form with bold income claims like that shown below:

But anyway getting past that came the cost – which was apparently “just $7“… But as you can likely guess, the REAL cost was not “just $7″…

Also it seems that the offer has potentially been banned in California or Vermont… Not sure why, but it appears Lombardi Publishing are disallowing subscribers from those states & a “ban” is the only reason I can think for them to do so.

Either way, all that brings me onto…

Well this is where it becomes a bit of a case of both yes & no – because whilst what is being offered by Lombardi Publishing is technically legitimate, in my opinion there is quite a bit of “trickery” going on to get you to sign up to their newsletter.

The simple truth is that you are going to be unlikely to make as much money through the Insurance Return Checks newsletter as promised – or as quickly/easily as promised, at least not without investing an outrageously substantial amount of money (which is put at risk).

So with all that in mind there is simply no way that I will be personally recommending the Insurance Return Checks newsletter as a good way of making money & instead I will actually be advising that you steer clear of it, because in my opinion there are much better ways to make money online.

And the way that I personally use to make my own money online (which you can get started with for free at Wealthy Affiliate) doesn’t involve any risk at all – so if you’re still looking for a good way to make money then I definitely recommend you check out my guide for getting started here.

But whatever you decide to do I just hope that the review I’ve published here has helped you gain a better insight into the whole IRC Insurance Return Checks thing & if you do happen to have any further questions or comments then don’t hesitate to leave them below.