I stumbled across a pretty eye-catching website today – it was named “Guaranteed Oil Pension Checks” & it had been put together by a company called the Lombardi Publishing Corporation who were claiming via the site that they could provide you with a way to generate steady, reliable income that would pay you eight times more than social security. 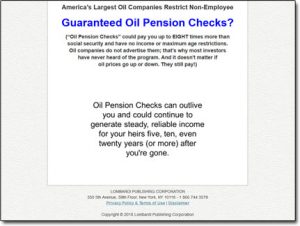 And I think you’ll agree that’s a pretty bold claim for sure – so what’s the deal about these so-called Guaranteed Oil Pension Checks?

Are they really legit or is it just another big scam, like the whole Freedom Checks thing that surfaced late last year?

Well, you can rest assured that you’ve landed in the right place to find out as I’ve tasked myself with looking into these “Oil Pension Checks” and in this review, I’ll be uncovering the truth about them along with everything else you need to know. 🙂

What Are Guaranteed Oil Pension Checks?

Well, the Lombardi Publishing Corporation website that promotes these checks essentially makes them out to be some sort of magical checks that’ll just reliably keep paying you a ton of cash for nothing… But whilst it would be nice if it did, money doesn’t come that easily… Or does it?

Well according to their site at least – it does – and they claim that their Oil Pension Checks will pay you eight times more than social security. They also claim that the reason you likely haven’t heard of them its because “oil companies want to keep them a secret”…

However, given some of the financial results that these Oil Pension Checks seem to be providing people with (as shown below) I find it hard to believe how if these checks are really legit they haven’t made it more mainstream already…

I mean from the example above why is Mark earning a reasonable $2,728 from these checks whilst Perry is making $20,299.85 per month?

In other words, what’s the catch?

At least “too good to be true” in the way that Lombardi Publishing Corporation is promoting them anyway… And I have that good authority from a financial professional.

Plus I even have proof of that too.

Financial professional taxmanrog from JustAnswer said the following in response to someone who queried the Lombardi Publishing Guaranteed Oil Pension Checks: 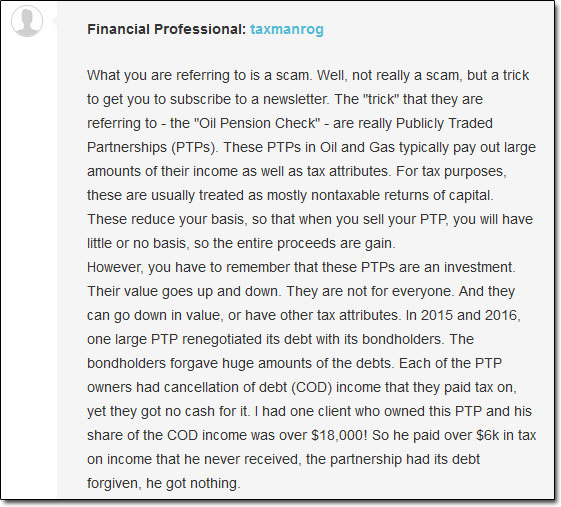 In my opinion that is an absolutely excellent answer – and just like I presumed at the very beginning of this review the Guaranteed Oil Pension Checks seem to be almost identical to the Freedom Checks and Congressional Checks things that surfaced last year. Albeit they refer to different PTP’s but in a roundabout way they’re a similar sort of thing – both tricks to get you to buy into a newsletter.

I suspect Lombardi Publishing Corporation too, is likely somehow related to Agora Financial as well since not only is the “trick” the same, but the promotional material used is extremely similar too (in my opinion at least).

Either way, I think the important snippet from the financial professional quoted above is that one person who owned these types of PTP ended up paying $6,000 in tax on income he never received.

So whilst these “Guaranteed Oil Pension Checks” might seem great on the surface & whilst you can potentially make money from them, clearly, there are quite a few catches & in my opinion, they are nowhere near as straight forward as Lombardi Publishing makes them seem.

The same financial professional also goes in in his comment to state another very important point which I’ve also published below:

And just in case you can’t see the image above for any reason he basically states that the current return on these PTP things (which Lombardi Publishing are calling Oil Pension Checks) is around 3% to 7% per year, which means you would need to invest hundreds of thousands of dollars to see anything close to what you are being told you can earn through these checks.

I guess that explains why the testimonials on the promotional material contain such wildly different figures… And at the high end of the scale quoted from the financial professional, that means Perry (who’s earning over $20,000 per month) must have over 3 million invested!

And remember what the financial professional also said – that the money is at risk… Meaning whilst Perry is getting a seemingly nice $20,000 from her 3 million investment, she could potentially stand to lose the 3 million at any moment in time.

Income For Life – It Is Agora Financial!

Even though the Guaranteed Oil Pension Checks were being sold through a company named Lombardi Publishing Corporation, as I mentioned earlier in this review I had my suspicions that they had something to do with Agora Financial which is a company that’s renowned for putting out hyped-up material like this… And I’ve just validated my suspicions.

Upon attempting to get access to the Guaranteed Oil Pension Checks I was redirected to a purchase page where the product was named Income For life, as shown below:

Naturally, I decided to run a Google search to see what others had to say about this Income For Life product & lo and behold the first result that came up was that of Agora Financial as shown below:

But anyway that aside… How much does Income For Life cost? Is it really just $5?

As you’ve probably already guessed the answer to that is most certainly NO!

Is it worth it? In my opinion no – especially since the cost doesn’t end there (as you’ll have to invest thousands to stand any chance of making any sort of substantial income through the scheme)… And you also have the big risk of losing funds too.

Are Oil Pension Checks a Scam?

I think in this situation as the financial professional that I quoted earlier in this post said, scam is not really the correct word to use – it is more a “trick” to get you to purchase a newsletter & then you’ll later be left to find out that the whole thing is not quite as great as it seems.

You see to summarize, whilst you can potentially make some money from what Lombardi Publishing is calling Oil Pension Checks – in reality, it is not as easy (or as risk-free) as they are making it seem.

To stand any chance of making anything substantial you must invest literally hundreds of thousands of dollars & whilst if you did so you could indeed stand to make money, you could also stand to lose it all as well. In my opinion, it’s a BIG risk.

So based on all of that there is simply no way that I will personally be recommending these so-called Guaranteed Oil Pension Checks because I believe that if you are looking to make extra money there are much better ways to do it.

To date one of the best ways I have ever come across to make extra money is something called affiliate marketing & it’s the exact same risk-free method that’s enabled me to build up an income of over $10,000 per month… Plus you can even get started with it without paying anything at all over at Wealthy Affiliate.

So if making extra money is what you’re looking to do, then I’d personally recommend dodging these so-called Oil Pension Checks & instead just sticking with something legitimate & proven like Wealthy Affiliate.

But whatever you decide to do I just hope that my review here has helped you get a better understanding of exactly how these so-called checks work – and of course, if you do still have any comments or queries don’t hesitate to leave them below.