The 1K Daily Profit system is something that’s supposedly been created by a guy named John Becker who claims it can enable you to easily generate $1,000 per day through automated binary options trades online. 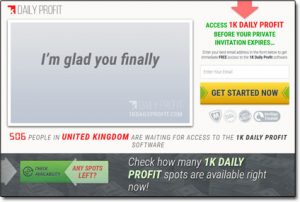 John Becker also claims that only 25 people will be given access to the system & that you’re one of them, but is it actually legit?

Or is 1K Daily Profit a scam that’s just out to part you with your cash?

Well, you’ve landed in exactly the right place to find out as I’ve personally taken a closer look into it & in this honest 1K Daily Profit review I’ll be uncovering everything you need to know.

What Is 1K Daily Profit?

John Becker, who supposedly founded the 1K Daily Profit system claims that it is something which has been built to utilize the same trading algorithm used by billionaire investors like Warren Buffet.

He claims that the system is completely free & that it’s entirely automated so that you can simply sign up, deposit your funds with the broker that he recommends & start making $1,000 per day.

Apparently, even if you’ve never even heard of binary options trading before you can still make money with this system – at least that’s what our man John Becker says anyway…

But don’t ya think it sounds a little too good to be true?

I do too – I mean if you can just sign up to these things & start making $1,000’s per day online without having to do anything then why isn’t everybody doing it? And why hasn’t it been on the news already?

My guess is because you can’t – it seems to be an awful lot like the 50K A Week system I recently reviewed which turned out to be nothing but a scam. I suspect the same here of the 1K Daily Profit system.

But let’s take a look…

How Does 1K Daily Profit Work?

Our man John Becker claims that all you need to do is sign up to the system for free, deposit some funds with the broker he recommends, hit the “start trading” button & then watch the money come rolling in…

And whilst the process kinda works like that – unfortunately, in reality, it’s not quite that easy (and those profits he promised kinda don’t exist)…

Immediately after signing up to the 1K Daily Profit system (which I actually don’t recommend you do), you’ll be forced to make a minimum deposit of $250 with the broker that John Becker recommends.

Even if you already have an account with another broker it doesn’t matter – he claims that in order to get access into his system you must deposit with the specific broker he recommends to you.

Now if you take even a moment’s hesitation at making that deposit you’ll find yourself beginning to get bombarded with emails & phones calls from the brokers & the 1K Daily Profit system convincing you to do it.

John Becker, the guy that has supposedly created this system doesn’t exist – the photo that’s shown on the website is merely a stock photo of a random businessman taken from another website.

This system has actually been created by the brokers themselves in an effort to get more people to sign up & deposit funds – this became clear to me when the brokers basically started begging me to deposit.

You see when it comes to binary options brokers they only make money when you lose money, meaning it’s absolutely not in their interests for you to profit – so why would they be so desperate for you to deposit & start using a system that essentially guaranteed you massive daily profits?

The answer to that is because in reality, the 1K Daily Profit system is nothing but a clever (yet sneaky) ploy to get you to sign up & deposit funds so that the brokers can make money at your expense.

The problem is you’re only left to find out the system doesn’t work as promised after you’ve deposited your money – instead of making profitable trades, you’ll find the system makes nothing but losses.

The brokers know that binary options trading is extremely risky & that generally, not many people are interested in it – but by making you think you can profit they believe they can trick you into signing up.

And sadly it works…

However, this is how these scams are catching so many people out.

What you have to remember is that the broker is in on this whole thing & that the are not going to just let you withdraw your funds so easily – instead, they’ll use several underhand tactics to keep hold of your cash.

Basically, the brokers associated with these types of binary options scams & rogue brokers – they’ll do anything to get your money off you.

Is 1K Daily Profit a Scam?

Yes, it’s clear to me that this system is a scam that’s set out to do nothing other than part you with your hard-earned cash. Everything your told is lies & the system doesn’t work as promised.

The 1K Daily Profit system is merely a ploy to hype you up about the opportunity of making easy money, then after making your deposit you’re left to find out that instead of making winning trades the system makes nothing but losses.

Sadly by this point, it’s too late to do anything about it because the brokers have already got your money from you – you can try to make a withdrawal but it’s unlikely these rogue brokers will honour your request.

Basically, this system does nothing but fill you with lies in the hope that you’ll blindly sign up & try it out – unfortunately, many people will, but hopefully, you were able to find this review first before signing up.

My advice to you if you’ve lost money to this system would be to read this post which might help you get it back.

As you have probably guessed this particular system will be getting a huge thumbs down from me & I certainly won’t be recommending it because it’s clearly only set out to make the creators rich at your expense.