Just Share The Link, a program alternatively known as The Link Cash System is a newly launched make-money opportunity that’s been allegedly put together by a guy named Jonathon Crisper from Orange County, CA. 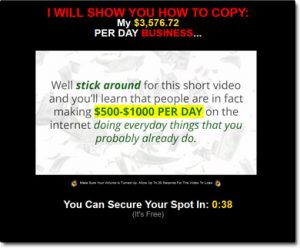 He claims that if you join the system he’ll show you how you can copy his $3,576.72 per day business & he even states that you can generate all this money “just by sharing a link”…

But is it actually legit, or is Just Share The Link a scam?

Thankfully you’ve landed in the right place to find out because I’ve taken a closer look into it all & in this review I’m going to be uncovering everything you need to know, including how it all really works & whether or not you can really make money with it.

Just Share The Link, as I briefly mentioned above is a program that’s recently been launched by a guy who’s allegedly named Jonathon Crisper. The reason I say allegedly is that there’s absolutely no information as to who this guy is, he claims he’s from Orange County, CA in his sales video for the system but that’s literally all we get to know about this guy.

And that’s a big red flag right from the off because it’s always worrying when the owners of a company or program launches but chooses to hide their details. It’s a common trait of a scam.

They do this so that when their scams get busted they can simply launch another one using a different name right after to continue parting people with their hard-earned cash. For all, we know the name Jonathon Crisper could be completely fictitious & it likely is.

Anyway, our guy Jonathon claims that he’s had meetings with the likes of Mark Zuckerberg & Bill Gates (I know, a crazy claim) and he says that during these meetings he discovered a “loophole” which can enable you to make around $500 per day from doing, according to him, nothing other than playing around on the internet.

But what I want to immediately point out here is that his website that he uses to promote this system kinda contradicts itself. It starts out by telling you that you can make $3,576.72 per day using his method, then the video later states you can only make $500 to $1,000 per day. I admit that they’re all large amounts of money but come on which is it? Or is he just making this stuff up?

I think you probably know it’s likely the latter, but let’s take a look & see how it all works…

How Does The Link Cash System Work?

Firstly before I dive into explaining how all this is supposed to work I just want to point out that for some strange reason Jonathon Crisper gives his system several different names. He starts out calling it the Just Share The Link System, then you’re told it’s The Link Cash System & finally when you reach the purchase page it’s once again re-named to The Lifetime Link Share System…

It’s a little weird that he does this but my suspicion is that he’s doing it to try & dodge the negative online reviews. It’s likely that before people hand over the cash to join his program they’ll want to find out more info about it… But what do they search? He’s confused them so they don’t really know what to search & if they do they likely won’t be able to find anything… If he is doing it for this reason then it, of course, means he’s expecting negative reviews.

Certainly not a good sign! But anyway, let’s see how it all supposedly works…

Basically Jonathon claims that if you hand over $47 he’ll give you some step by step training on how you can start making money just by sharing links online. He says that he’ll show you how to get these “special” links and that companies will pay you to share them via email, via Facebook & via Twitter…

Basically Jonathon’s whole Just Share The Link program is total BS, but the concept behind it at least is not. You can indeed earn money by sending people to companies via special links, it’s called affiliate marketing, but the way Jonathon teaches you how to do it through his Link Cash System program will not make you any money… And certainly not $500+ per day as you promised.

All Jonathon is doing through his website is getting you hyped up about the opportunity of earning a lot of easy money online in order to get you to part with your cash. Then when you do you’ll find that whilst the method technically works in theory, the training he provides you with is total junk & will not help you get started at all.

You see the methods he teaches basically consist of spamming & as opposed to helping you make money these methods will just get your accounts blocked. You can’t just send people emails out of the blue containing affiliate links like he claims – if you do then it will likely hit the recipients spam folder so they’ll never see it, but if it doesn’t there is just no way they are going to click a link in a random email.

Similarly, he states that you can just post your links out on Facebook & Twitter too but again these platforms don’t allow any of that. All this will do is see you getting your accounts banned before you manage to make a penny…

You Can Actually Make Money With Affiliate Marketing…

Whilst Jonathon’s system, in particular, is complete junk, it is loosely based on a concept that does actually work & there are several other legitimate companies such as Commission Academy which will actually show you properly how you can make money from this method.

Basically affiliate marketing just consists of you connecting people with the products they are looking for online & in return the companies you are sending them to will pay you a commission for referring them.

So for example you could join the Amazon affiliate program & as an affiliate of their program, you would get a special link to their products which contains a code unique to you. If somebody clicked through this link & made a purchase then the sale would be tracked to you & you would earn a commission since you were the one that sent them there.

But, of course, most companies will not work with people who involve in spamming… So there is no way Amazon would accept you onto their program if you were just spamming your links on Facebook or sending them in spam emails (which is why Jonathon Crispers Share The Link System doesn’t work).

His system is just preying on people who don’t know much about affiliate marketing & making it seem like it is easier than it actually is so that he can earn some money by getting them to buy into his BS “system” (which consists of nothing but low-quality training).

To put it simply, yes in my opinion it is. Whilst the system is loosely based on a legitimate method of making money (which is affiliate marketing) it’s completely misleading & it’s clear that it’s purely been set up to make the creator wealthy at your expense.

There is absolutely no way that you will make money as a result of going through the training inside the Link Cash System, instead, you will just be disappointed that you handed over $47 to get access to it.

But as I say affiliate marketing itself is actually a legitimate (and very good) way to make money online – there are alternative programs available such as Commission Academy where you can learn how to get started with it the real way… Without all that hyped up BS like the Just Share The Link system gives you.

So overall as you can probably imagine I am not going to be recommending this program, instead I am going to advise that you avoid it because like I said above you will find yourself disappointed at what you receive.

And as always if you have any further comments or questions don’t hesitate to leave them below.