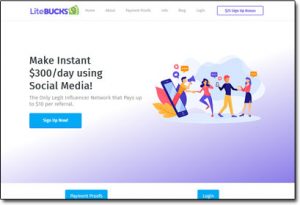 But is it actually legit? Or is LiteBucks a scam that you should just avoid?

Well, I’m really glad that you came here to this LiteBucks review before signing up because I can immediately tell you from the off that the whole thing is not what it seems. It’s actually pretty dangerous.

LiteBucks is a newly launched website which has decided to call itself “the only legit influencer network” and as I briefly touched on above it essentially promises to provide a way for people to earn lots of money from social media.

They state on their website that all you need to do is sign up for free, share your unique referral link on social media & that you’ll then earn $10 for every friend that happens to create a free account via your link just like you did.

They even claim that you’ll be able to make as much as $300 per day right from your very first day of getting started (as shown below)… Which I think you’ll agree is an insanely large amount of money for a task that seems so simple.

And I think you’ll also agree when I say that it all sounds WAY too good to be true.

I mean for example, where is the money coming from? If everybody is creating free accounts & then just getting other people to create free accounts then how on earth can LiteBucks afford to pay out so much money?

The simple answer is that they can’t.

I mean sure, they’ve tried to come up with a fake story claiming that they get paid by advertisers & that the more people that visit their website the more money they get paid… But that’s just BS.

I’ve previously seen the same scam called InfluencersEarn & NiceCash (among many other names)… The people behind it just keep on changing its name to escape the negative reviews that expose the truth so that they can continue tricking people into joining.

And the worst part is that even though it all seems pretty innocent, the whole thing is actually really dangerous.

I’ll explain why below…

So as I very briefly touched on in the previous section the concept is that you sign up, share a link & then earn money for every person that happens to click on your link & create a free account… But that’s not really how it works.

The truth is that LiteBucks is actually what’s known as a data-harvesting scam, and nobody will ever get paid.

In short, the whole thing has simply been set up to trick you into handing over your details (which you do when you sign up) and then it tricks you into referring others so that the people behind it can get their details too.

It’s a cunning scam because they’ve made people believe that they’re actually earning good money so many people have been sharing it online & luring others into the scam but none of the members will ever get paid.

The money isn’t real… It’s all just faked numbers to keep you referring others – and that’s why LiteBucks has set a ridiculously high withdrawal limit. They want to force you into recruiting a whole bunch of people before you’re able to find out that it’s a scam.

The Danger Lies In What They’re Doing With Your Data

The people behind LiteBucks are likely doing 2 things – they’ll either be selling your data onto 3rd party marketing companies for profit or worse (more likely) they’ll be trying to compromise your online accounts.

So they’ll basically be hoping that you sign up to LiteBucks using the same username/email/password combination that you use elsewhere.

This means that after signing up to LiteBucks the people behind it will probably try to find other online accounts that are associated with your details… Such as PayPal accounts, social media accounts, bank accounts etc… Then they could try to compromise them.

Therefore if you did indeed sign up to LiteBucks using the same details that you use elsewhere then it comes without saying that you should go ahead & change them on those websites ASAP, to prevent that happening.

And just in case you’re still thinking about trying LiteBucks out despite what I’ve said above (which unfortunately some people still do because of the large amounts of money being boasted), be sure to check this out…

The Proof That It’s Not Real

But on top of that, there’s also more solid proof that it’s all lies too…

For example, there’s the fact that LiteBucks claims to have “been around for a while” and to have paid out over $44 million in earnings to their members, but as shown below the website is actually only a little over 1 month old: 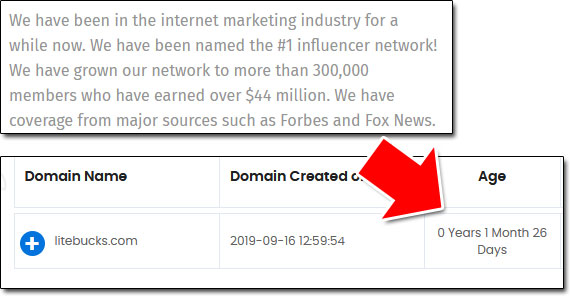 Then on top of that, there’s also the fact that they made a huge mistake in their FAQ…

Remember I said that I had already seen this same scam several times before under different names? Well as shown below in their FAQ they forgot to change some of the text from PaidLeaf (a previous version of the scam) to LiteBucks: 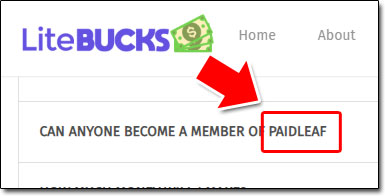 Which blatantly highlights that it’s the exact same scam, and that brings me onto…

LiteBucks is definitely a scam, there’s absolutely no doubt about it. The whole thing is just a trick to get you to hand over your data & then to trick you into luring others to do the same… Nobody will ever get paid.

And like I just highlighted in the previous section of this review the scam is just a re-hashed version of a scam I have already exposed several times on this blog in the past. The people behind it just keep on changing its name in an attempt to trick more people into joining.

So it, therefore, comes without saying that I won’t be recommending LiteBucks to you & instead if you really want to make money online with a way that actually works then I suggest you stick with the legit methods from my top picks page.

You could also check out affiliate marketing too which is one of my all-time top recommendations for making good money online (because it’s the same way that I actually make most of my own money online).

In case you don’t already know, affiliate marketing basically involves promoting products or services online & it’s a great way to earn money online because the amount you can earn with it is totally uncapped.

What’s more, is that you can even get started for free with it (or learn more about it) over at Commission Academy.

But whatever you decide to do I just sincerely hope that my review of LiteBucks here has given you a good insight into how it all really works & hopefully, it has helped you to avoid getting caught out by it. If you happen to have any further questions or comments then don’t hesitate to leave them below. 🙂

2 thoughts on “LiteBucks Review – Scam or Legit Way To Earn $300 Per Day With Social Media?”