The newly launched Netflix Revolution software promises to provide you with an easy way to earn lots of money online as it claims that it can trade Netflix stocks profitably entirely on your behalf. 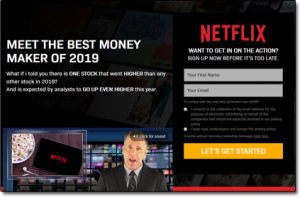 It says that the new gold rush is the “Netflix rush” and you’re led to believe that you can sign up for free, deposit some money & then activate the system to begin generating profits the very same day you get started.

But is it really legit? Or is the Netflix Revolution trading system a scam that you should avoid?

Well, I’m glad you came to this Netflix Revolution review first because I can immediately tell you that it’s NOT what it seems. In fact, the whole thing is pretty darn dangerous.

What Is Netflix Revolution?

The Netflix Revolution trading system is an automated trading system that claims it can generate you an income all on complete autopilot by trading Netflix stocks on your behalf.

It refers to Netflix stocks as being the new gold rush & claims that by trading their stocks you will stand to make a fortune (as shown below):

It even claims that whilst they expect the Netflix stocks to rise, you can still make money using the system even if they fall…

And if all of that didn’t sound good enough on its own, the creator of it (who remains anonymous) states that you can use the system for free. You just need to sign up, deposit with the broker & then “activate” it to make money.

But there’s one problem, which is the fact that it all just sounds WAY too good to be true.

I mean you’re told that you can literally make millions with it & that you can start earning instantly all without having to do anything… But if that’s true then why isn’t everybody using the Netflix Revolution system?

Why are people still working at jobs they dislike if they can simply sign up to Netflix Revolution & start earning more money without having to do anything?

The answer is because the Netflix Revolution system doesn’t work as promised. It’s actually just a scam & I can say that so confidently because I’ve actually seen the exact same system under a different name.

It was previously called NetflixSoft when I seen it last & basically the creator has simply changed its name in an attempt to escape the negative reviews that exposed the truth about it so that he (or she) can continue tricking others into signing up.

Sadly those that do sign up will just LOSE money, not make it – as you’ll see below when I explain how it all really works…

How Does Netflix Revolution Work?

So the person behind the system has attempted to make everything seem super simple. You’re told that all you need to do is sign up, deposit with the broker that they recommend & then “activate” the system in order to begin making money.

You’re literally led to believe that the system will do everything on your behalf & that from there you’ll just start receiving an automated income.

But that’s NOT really how it works…

You see there’s one very important point the creator has left out which is the fact that the creator of the Netflix Revolution system & the broker that you’re recommended to are affiliated with each other.

This means that if you sign up & deposit, the creator of the Netflix Revolution gets paid a commission at your expense – and the whole thing is all just basically a trick to get you to do exactly that.

Nothing you’re told on the website is true, it’s all a pack of lies. The creator just wants to make you think that you’ll be able to profit so that you’ll sign up & deposit so that he can earn some money at your expense.

And the fact that they’re actually affiliated PROVES it’s a scam – because the broker that you’re recommended is what’s known as a binary options broker.

A binary options broker doesn’t add fees to their trades, instead, they make money when you lose money. If you win money it actually costs them money – so basically it’s in their best interests for you to lose.

Now ask yourself this – why on earth would a binary options broker (that only makes money when you lose money) pay commissions to the creator of a system which could supposedly see you generating guaranteed profits?

They wouldn’t – no way… The real reason they’re paying the creator commissions is because they know that the system is actually going to make you LOSE money instead (and lots of it).

Plus there’s also the fact that the “news clip” shown on the Netflix Revolution is 100% fake.

As shown below the “news presenter” is actually just an actor that’s been hired from the website Fiverr:

They’ve created the fake news clip to try & make you believe that the system might actually be legit & to encourage you to try it out but as you can see from the image above it’s blatantly not. It’s a fake.

But The Scam Only Begins With The Deposit

You might be thinking that you’ll simply be left to find out the hard way after depositing that the Netflix Revolution system doesn’t really work as promised but no – sadly the creator of it is much more cunning than that.

Instead of just taking the initial deposit from you he has actually gone to the lengths of creating a fake trading system which has been designed to make it seem like you’re actually successfully generating profits.

So after depositing money with the broker that you’re recommended, you’ll be given access to the system as promised & it will appear like you’re making money. You’ll see the system trading & it’ll appear to be winning most of the trades…

Unfortunately, though this just a further part of the scam to trick you into depositing even more money. The system isn’t actually connected to any live markets, it’s basically just a video game displaying faked numbers.

You’ll only actually be left to discover the whole thing is a scam when you try to get a withdrawal. That’s when you’ll realize your withdrawal request will either get ignored, refused – or that the broker will ask for more money to release it.

Of course, the broker asking for more money is just a further part of the scam… They’re in on it together with the creator of the Netflix Revolution system & they both just want to part you with as much cash as possible.

Is Netflix Revolution a Scam?

Yes, the Netflix Revolution software or system whatever you want to call it is definitely a scam. The whole thing is a fake & it has simply been set up to trick you into depositing with an unlicensed binary options broker so that the person behind it can earn at your expense.

As I mentioned towards the start of this review I have already seen this system before under the name of NetflixSoft & the creator has simply changed its name in an attempt to escape the negative reviews so that he can trick more people into signing up.

What’s worst about it is the fact that the creator has actually built a fake system to make you think that you’re actually profiting so that you’ll deposit more money. It’s a disgusting scam that could result in you losing a LOT of cash.

So it, therefore, comes without saying that I won’t be recommending Netflix Revolution & instead, if you truly want to make good money online I would suggest you check out the legitimate methods on my top picks page here.

Or you could also check out the same way that I personally make money online which is through something called affiliate marketing.

The great thing about affiliate marketing is that it’s easy for beginners to get started with & the amount you can earn with it is totally uncapped. The more work you put in, the more money you stand to make.

You can learn more about it or get started for free with it over at Commission Academy.

But whatever you decide to do I just hope that my review of Netflix Revolution here has given you a good insight into how the whole thing really works & I hope it has helped you to save your money.