In this review I’ll be taking a look at the newly launched Profit Countdown system which claims it’s members can simply plug-in & copy the creator’s $3,176.45 per day online business. A very bold claim indeed. 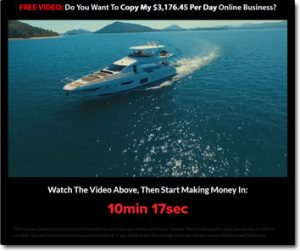 I’ll be uncovering everything you need to know about it, finding out if it really works & most importantly finding out if you can actually make any money as a result of becoming a member.

So if you’ve been thinking about joining Profit Countdown you can rest assured you’ve landed in the right place to find out if it’s going to be worth your while – and I am not an affiliate so you’ll be getting the unbiased, honest truth.

What Is Profit Countdown?

The Profit Countdown system actually looks very similar to a system I recently reviewed just the other day named the Simple Profit Secret & I actually think the two systems may be launched by the same person.

Both of them claim to be able to generate you thousands of dollars in commissions just by “plugging-in” and copying their supposedly super simple step-by-step instructions.

Though the Profit Countdown system has made me especially sceptical as it shares all the common traits of a traditional get-rich-quick scam, bold claims, lot’s of hype & videos showing you flashy mansions/yachts…

I mean yes it is certainly possible to make money online, but it’s not possible to make lot’s of it without actually doing anything like the Profit Countdown system claims & whenever systems promise that it always makes me wary.

The Truth Quickly Gets Uncovered

After spending just a couple of minutes watching the sales video presented by the Profit Countdown system it became clear what this system was all about, and that’s because I noticed a familiar face pop up… 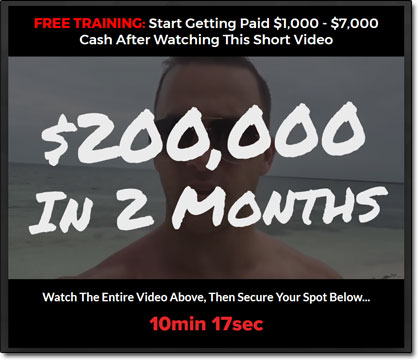 The guy pictured above (behind the extremely bold $200,000 in 2 months income claim) is a guy named Jason, and I’ve actually met Jason in person at an event I flew to last year in Las Vegas.

The event was hosted by a company named Digital Altitude – and that’s the company Jason is part of so as soon as I saw his face in the video I knew instantly that the Profit Countdown system was just a sales funnel for Digital Altitude.

I was actually a member of Digital Altitude when it first launched but I left because of a few reasons which I’ll share with you in just a moment (after leaving I joined this company instead which I believe to be MUCH better).

As to whether or not Jason is the creator of the Profit Countdown system I don’t know – there are few other people from DA shown in the video too so it could be one of their systems I’m not sure… But what I can confirm is that as per my suspicion the Profit Countdown & Simple Profit Secret systems do seem to have been launched by the same creator.

Basically, neither of these systems are systems… They are just sales funnel which is designed to get you to buy into the Digital Altitude opportunity, which is what’s known as a high-ticket pay to play network marketing program.

What Is The Digital Altitude Opportunity?

As I just touched on above Digital Altitude is a high-ticket pay to play network marketing company – this basically means that it’s a company which sells high priced products & that you can earn commissions by reselling them but you must purchase them yourself in order to do so.

Is it a scam? Technically not because you can make money, but in my opinion, it’s more of a program that’s designed for advanced network marketers to take advantage of newcomers & earn commissions at their expense… Which is the main reason I left.

And whilst Digital Altitude does technically have products (which include things like marketing/mindset training & events) they don’t, in my opinion at least, provide good value for money. It appears to me that they’ve merely been priced with commissions in mind.

You’ll be presented with the opportunity to make money through an online business (via a website like Profit Countdown) & you’ll be told that it only costs you a small fee of around $1 or $37 to get started.

Naturally, you’ll be pretty interested & at such a low cost you’ll probably go on to try it out… Like I did.

However, this is where things get problematic because from here onward you’re just going to see yourself spending more & more & more money as you progress through the 21 steps inside the system.

That’s because at the beginning of your journey through the steps you’ll be assigned a “personal coach” who is actually just a salesperson set on getting you to upgrade (because they also get paid if you do).

So at the end of each step, you’ll be forced to call your coach & explain what you learned, then your coach will turn round & give you reasons why you should upgrade to the next level. Of course with it being a pay to play program the reason will be because at the next level you’ll be able to earn higher commissions – and who wouldn’t want to earn higher commissions for the same level of work?

Therefore if you have the money available then the chances are you’ll upgrade, and this process continues on throughout the remainder of the steps. At the end of the 21-steps, you could have potentially spent around $50k if you chose to upgrade all the way to the top level which they call APEX.

Only from here onward you’re pretty much left to go it alone, and whilst you do get the occasional webinar & group call there isn’t really any sort of high-quality structured training that will guarantee you results.

In fact, the chances are you’ll be left pretty confused & very frustrated.

So whilst Digital Altitude is legit by technicality, in my opinion, it’s not something I would really recommend spending your money on because due to the lack of structured training it’s difficult to succeed with the program, especially as a newbie. In my opinion, you would be much better off with something like this where you can get free training & it’s laid out step-by-step heightening your chance of success.

The Bottom Line – My Final Verdict

For that reason, and the fact that the Profit Countdown sales page is totally over-hyped & gives you unrealistic expectations of what you can achieve I won’t be recommending that you sign up.

Plus it’s worth pointing out that very few people find success in high-ticket network marketing opportunities like Digital Altitude & generally those that do already have a strong knowledge of marketing prior to joining.

If you’re not an expert & you’re merely a newcomer looking to find a legitimate way to get started online then I’d recommend you try out this free training. That’ll teach you the basics & help you begin making money.