The Profiteer system has been put together by two guys named Jason Fulton & Mosh Bari & it claims that it can enable you to earn an “effortless” $150 per day even if you’re totally brand at making money online. 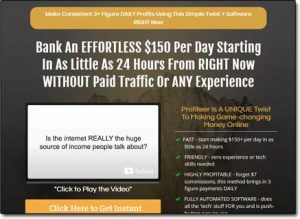 But is it actually legit? Or is Profiteer a scam that’ll just cost you money rather than help you make it?

Thankfully you’ve landed in exactly the right place to find out as I’ve taken a closer look into it & in this honest review I’ll be uncovering the truth about how it all actually works & I’ll also be determining whether or not you can really make any money with it.

The Profiteer system claims to be a game-changing online income system & promises to provide a way for its members to begin easily generating up to $705 per day within just 24 hours of getting started.

The whole thing has been put together (as I touched on above) by 2 guys named Jason Fulton & Mosh Bari. Now the good news here is that these 2 guys are indeed real people… They’re not just fake actors like we see with many scam systems… However, the not-so-good news is that they don’t have that much of a great track record when it comes to creating products.

You see the Profiteer system isn’t actually the first system they’ve put together – they’ve actually created quite a few prior to this one, all of which promised similar things. The problem though is that none of them appear to have actually delivered on their promises.

Surprisingly though despite their track record quite a lot of people seem to have once again got their hopes up that the Profiteer system will finally be the system that actually works, but after taking even just a quick glance I personally can’t see that being the case.

The reason I say that is because the system just follows all the common traits of a typical get-rich-quick product. They promise it will provide you with some super easy way for you to make lots of money but they don’t tell you what the method actually involves & instead in order to find out you have to hand over your cash.

But obviously I won’t brush it off straightway, I mean after all (as much I find it unlikely) maybe we can actually make some money with the Profiteer system… So for that reason let’s take a look at how it all works & find out for certain…

How Does Profiteer Work?

Well, surprise surprise the first thing I can say after taking a closer look into the Profiteer system is that it sure as heck doesn’t work as promised. In reality, it’s likely just going to see you spending money instead of actually making it…

You see the whole concept of it is building & flipping websites, which on its own can be quite a profitable thing to do… However, the problem is you cannot literally just build a website & expect to flip it for lot’s of cash (which is what Jason and Mosh want you to believe you can do).

The reason for that is because why on earth would anybody pay lot’s of money for a brand new website that’s just been built when you know… They could just save the cash & hire someone to build one for them instead?

And this is where the Profiteer software falls down because whilst yes, it does actually make creating websites pretty easy – it doesn’t really provide a great deal of help when it comes to getting traffic.

Therefore if you can’t get traffic to the website (which is what you need to make money) then you’re going to find it very difficult to sell the website so the whole method just kinda falls apart.

Plus there’s the fact that most of the decent website flipping sites (such as Flippa) charge listing fees, so if you don’t actually manage the sell the websites you create you could just end up even more out of pocket.

In my opinion, this is just straight up another one of those products that has been primarily designed to make its creators rich at the expense of the members. So basically you’re just promised this “amazing” method & then you’ve got to hand over the cash to get it… But when you do you’ll just find yourself disappointed because it doesn’t really work as promised.

And that’s the reason why they keep the method secret in the first place… Because they know that if they actually shared it with you from the off then you probably wouldn’t even buy the product at all.

Then There’s The Upsells…

One of the most annoying things when it comes to over-hyped programs like the Profiteer system is the fact that the fee you pay to get in often doesn’t actually give you access to everything there is offered.

Instead, you’re forced to go through a series of upsells where you’re pitched all the missing components… So you’ll hand over your cash to join the Profiteer system then you’ll immediately be sold something else… Then if you purchase that you’re pushed through another upsell & you just don’t know where it’s going to end.

That’s how a seemingly cheap $12.94 program can often quickly see you being parted with hundreds, if not thousands of dollars.

And 9 times out of 10 even when you purchase all of the upsells, just like with the Profiteer system, you still get everything you need to find success. It’s super frustrating, to say the least, which brings me onto…

Is Profiteer a Scam?

Well, I wouldn’t go as far as to call it a scam, I think that would be a pretty harsh verdict to arrive at… However, what I will say is that it’s extremely misleading & it’s very unlikely that you’ll actually make any money with it.

There’s certainly no way that you’ll be able to make as much $150 per day through the Profiteer program & to say that you could achieve such results within just 24 hours of signing up is absolutely outrageous.

It’s therefore clear to me that the creators of the Profiteer system are just interested in making money for themselves & that’s why they’ve hyped the whole thing up – to get you to part with your cash.

For that reason, I won’t be recommending it to you as I feel that if you sign up you will just find yourself very disappointed. Plus there are already legitimate & proven places to learn how to make good money online such as Commission Academy which in my opinion is much, much better.

Hopefully, my review here has helped you see why I’ve come to that conclusion & I also hope that it’s enabled you to make a better decision as to whether or not you feel this program is really worth spending your money on. If you do still happen to have any further questions then don’t hesitate to leave them below & I’ll get back to you as soon as I can.