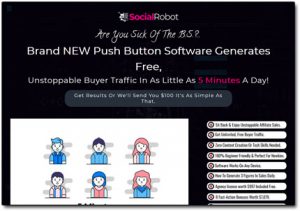 Are its claims really true & does this thing really generate “buyer traffic” like it promises? Or is Social Robot a scam that’ll just see you spending your hard earned cash & getting nothing in return?

If that’s what you’ve been wondering then rest assured you’ve landed in exactly the right place to find out as I myself have personally taken a closer look into it & in this Social Robot software review I’ll be uncovering the TRUTH about how it all really works. 🙂

What Is Social Robot?

The creators of it state that you just need to spend a mere 5 minutes setting it up & that after that you can earn hundreds of dollars per day.

On top of that though they even claim that if you don’t get results, they’ll send you $100…

But are any of those claims actually true?

I mean I’ve seen a LOT of similar systems launch that promised similar things but none of them have ever actually held out on their promises & lived up to their claims… So will Social Robot be any different?

Can this new piece of software really see you earning so much money without doing anything at all?

And if it is true then why isn’t everybody using Social Robot already? Why are people still working at jobs they dislike if they can simply make automated commissions online?

Why am I still wasting my time writing this blog post to generate traffic if I could just “set up” Social Robot & earn on autopilot instead?

The answer to those questions is because as you can likely guess, the Social Robot software does NOT work as promised. In reality it’s just another hyped up product that’s been designed to part you with your cash so that its creators can earn at your expense.

How Does The Social Robot Software Work?

Here’s one of the funniest things about the Social Robot software sales page – the creators Billy Darr, David Kirby and Justin Opay state the following:

In the next 2 minutes, I’d like to explain exactly how our brand new software – which we call Social Robot – can generate free buyer traffic & affiliate sales for absolute beginners like you…

I read literally every single word on the entire sales page (yes, all 2,683 of them) and not once did they mention anywhere how any of it actually worked. Instead they just said “click go to watch the free buyer traffic & sales coming in”…

That was apparently their explanation of “how it works”…

And other than than that they just kept saying “buy now because the price will go up in 60 mins”. The price never does actually go up by the way, so no rush. 🙂

But we have a combination of 2 things here – a combination of them concealing how it works & rushing you to make a purchase decision. Those are 2 of the biggest red-flags commonly associated with a get-rich-quick scam.

I mean imagine going to a shop to buy something & the shop saying hand over your cash first & then we’ll tell you what you’ve purchased after… That’s basically what’s happening with the Social Robot software.

And do you know what you are buying?

Disappointment – because the whole thing does NOT work as promised.

Literally all you’re getting access to is a social media auto poster which you can very easily get for FREE all over the place online – and this “auto poster” is going to be very unlikely to see you suddenly generating sales because it’s not doing anything special whatsoever.

The honest truth is that there are no shortcuts when it comes to making money online. If you want to make the good money then you simply must be prepared to put in the work to make it happen. The guys behind the Social Robot software are just taking advantage of people to earn money for themselves.

I mean think about it, if it really worked then I would be using it myself – I wouldn’t be spending my time writing this blog post right now… I’d just be sitting on a beach with a Pina Colada whilst the robot earns me money.

Yes you can BUILD a passive income, but you cannot just plug into a piece of software & get one so easily.

Does It Really Generate “Buyer” Traffic?

In short, “it might”… If you’re lucky… But it’s going to be very unlikely to actually see you earning anything because like I just mentioned in the previous section of this review it doesn’t really give you access to anything special.

The Social Robot is basically just a social media auto-poster, so sure… Eventually someone might click on one of your links & you might earn something, but I can tell you that you’re likely going to get banned long before that happens.

You see there’s something that social media networks really don’t like & that’s automation (when used incorrectly)… And here’s the deal, you can’t fool the networks because to automate tasks you have to use their API… So no matter how “human-like” you make your program, they still know it’s automated.

So as opposed to generating you buyer traffic the Social Robot will likely just get your accounts banned from the social networks that you use it on.

The truth is that like I also mentioned in the previous section if you truly want to make good money online you need to put in the work to make it happen. You’re not just going to get money falling into your lap for nothing & anything that promises you will is likely trying to scam you.

The good news though is that if you are prepared to put in the work there are places like Commission Academy where you can learn exactly what you need to do in order to actually being making money.

So if you haven’t done so already & you still want to make money I suggest you go join Wealthy Affiliate (it’s free).

How Much Does The Social Robot Software Cost?

Here’s the other kicker – on the sales page the Social Robot software is advertised as just costing between $18.13 & $22.95, but in reality if you want access to the whole thing it will cost you hundreds of dollars due to the upsells…

I mean just take a look at this:

That’s a screenshot from the Social Robot affiliate page which shows that there are a whopping 5 upsells on the inside costing over $425 in total… That’s a crazy increase from the advertised cost.

Do yourself a favour though & just save your money, because in my opinion Social Robot software is not worth it & if you spend all of that you will just find yourself very disappointed at what you get.

Is Social Robot a Scam?

Well I wouldn’t go as far as to say it’s a scam, but ultimately in my opinion it looks quite clear that the whole thing has been setup to trick you into handing over cash so that the creators can earn at your expense.

It hasn’t really been built with you in mind like they claim & as a result it’ll be very unlikely to see you generating any “buyer traffic” like they promise. You’ll just end up spending money instead.

Plus as I mentioned in the previous section of this review the whole thing costs closer to $500 as opposed to the advertised ~$20 so it’s pretty darn expensive for a program that doesn’t work as promised.

Instead if you really want to make good money online I would advise you to save your money & join a legitimate program that’s proven to work like Commission Academy instead as it’s there that you’ll truly find good success.

Or alternatively you can check out my other top picks right here.

But whatever you decide to do I just hope that my review of the Social Robot software here has given you a good insight into how it really works & hopefully it’s helped you to save your cash. If you still have any further questions though then don’t hesitate to leave them below in the comments section. 🙂