Task Stipend claims to provide a way for students to earn money online & according to their website the students that sign up to their site can earn as much as $1,200 per day just by completing small, simple tasks… 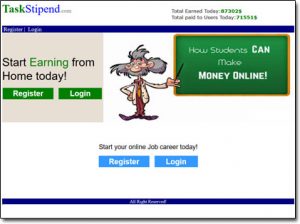 But obviously, that’s a pretty bold claim to make & it certainly seems unrealistic, so what’s the deal here – is it actually legit & can you really make money or is Task Stipend a scam that’ll just see you worse off?

Luckily you’ve landed in the right place to find out because I’ve taken a closer look at this site to see what it’s all about & in this review, I’ll be uncovering everything you need to know including how it all really works.

What Is Task Stipend?

Task Stipend claims to be a GPT website, which stands for Get-Paid-To. As the name suggests these types of websites pay you in return for completing quick & easy tasks online… But typically they only pay very little.

Most of the legitimate Get-Paid-To sites I’ve come across to date only pay around a dollar per task (many even less) & the reason for that is simply down to the fact that the tasks are so easy. There’s really no need for them to pay a high amount because there’s such a long line of people ready to do them for much less money.

Anyway, Task Stipend claims to be different… They claim to pay a fixed rate of $10 per task (which is insanely high) and they also even claim to give you $25 in credit just for signing up… But is it legit?

Sadly no, it’s not. The reason I can be so confident about that right from the off is that the Task Stipend website is actually just a re-hashed version of a scam I previously exposed on this blog named Duty Money.

But of course, I don’t just expect you to take my word for it so instead let me show you how it all works (or should I say doesn’t work)…

How Does Task Stipend Work?

Well firstly, just in case you happened to skip straight down to this point of the review let me point out that Task Stipend doesn’t work as promised, at least not in the sense of making you money anyway.

However, what I’m going to do here is show you how it really works so that you can see why you’ll want to avoid it…

Basically Task Stipend merely poses as a legitimate Get-Paid-To website in order to steal people’s details – and what’s even worse is that they actually even try to trick you into helping them do just that.

You see Task Stipend sells itself as the dream work-from-home job & it specifically targets students who potentially aren’t going to be wise to this sort of thing. You’re led to believe that you can make lot’s of money quickly & easily which I think you’ll agree is exactly what most students would want…

In fact, it’s pretty much what everybody would want…

I’ll explain what they’ll be doing with your details in a moment, but before I do that let me explain the next part of the scam…

Once you’ve created your account (which I don’t recommend you do) you’ll be taken to your members’ dashboard & this is where you’ll be told that you can earn $10 each time you get somebody to click on their so-called “advertisers” link.

Well it is an easy task but the problem is you won’t be earning any money from it – all you’ll be doing is bringing more people to the Task Stipend website so that the creators of this program can steal their details too.

Anyway, this brings me to my next point…

What Are They Using Your Details For?

The creators of this program are simply hoping that you will use the same details you enter into the Task Stipend on other websites too… Sites like Amazon, PayPal etc mainly.

After signing up the Task Stipend website the creators will get a notification & they’ll begin trying to login to any accounts that are associated with your email or username – if they’re successful they’ll bleed them dry.

So yeah, if you’ve already signed up to Task Stipend & you do happen to use the same details elsewhere I’d recommend promptly changing them.

And certainly don’t participate in the so-called $10 per click referral program.

But yeah, surprisingly despite the website looking like it was developed by a 2-year-old this is actually a really big scam going on at the moment & it’s catching a lot of people out.

The frustrating part is that the creators keep changing the name of the sites to avoid negative reviews so that they can keep scamming people. I’ve previously seen this exact same site called Dollar Tell & Duty Money… Now here it is again named Task Stipend.

Is Task Stipend a Scam?

Yes, I can confidently say with 100% certainty that the Task Stipend website is a scam. Despite them making it seem like you are earning money the reality is that no matter how large of a balance you rack up they will not let you withdraw a penny… The whole site is just a ploy to get you to part with your details & to get you to bring others in so that they can do the same to them.

So overall as you can imagine I’ll be giving this site a big thumbs down because as far as I’m concerned it’s nothing but bad news, I’d also appreciate it if you could share this post to let others know that too.

But anyway yeah there’s nothing really more to say about this so hopefully this review provided you with the insight you were looking for into this program & helped you keep your details safe. If you do happen to have any further comments or questions don’t hesitate to leave them below.