The Breakout Code is a new program that has been put together by two guys named Mark Barrett and James Fawcett & it claims to leverage a “breakout hack” for making money online. 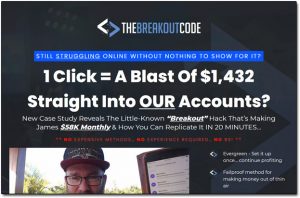 You’re led to believe that by using this so-called “breakout hack” you can simply make 1 click of your mouse & “blast $1,432 straight into your account”, even if you’re completely new to making money online.

But obviously, that’s a pretty bold claim & so no doubt you’ve probably found yourself feeling pretty sceptical of it.

So what’s the deal? Is The Breakout Code a scam? Or does it really offer some sort of magical way for easily making lots of money online, even if you’re totally new?

Well, the good news is that you’ve landed in the right place to find out because in this review of The Breakout Code I’m going to be uncovering everything there is that you need to know.

And that includes, of course, whether or not it really works.

What Is The Breakout Code?

In short, The Breakout Code is a program that claims to provide an easy way for people to make lots of money online through a popular (and perfectly legitimate) method known as affiliate marketing.

And in case you don’t already know what affiliate marketing actually is, it basically involves you promoting products or services for third-party companies & getting paid commissions in return.

So basically as an affiliate, your job is to promote products for companies such as Amazon, and if somebody clicks through your links & makes a purchase, you get paid.

It’s a really good way to earn money & it’s actually the same way that I personally generate most of my own income online.

But the thing with affiliate marketing is that it takes work. If you want to actually make good money with it, then you must be prepared to put in work to make it happen.

And that’s where The Breakout Code comes in.

The Breakout Code claims to essentially provide you with access to a “secret method” for generating thousands of dollars with affiliate marketing, without actually putting in any work.

All you need to do is simply make 1-click & $1,432 will be blasted into your account thanks to their so-called “breakout hack”… Or at least that’s what they claim on their sales page.

But is it really true? Can The Breakout Code really enable you to make money so easily?

Well, in short, the answer is no – it can’t… And despite The Breakout Code stating “no BS” on its sales page, I can tell you confidently that the whole thing is actually just complete BS.

You’ll see why below as I explain in more detail exactly how it all works.

How Does The Breakout Code Work?

Well, the sales page for The Breakout Code leads you towards believing that you’re going to be getting access to some kind of “hack” that’ll enable you to make any money without work, but that’s not what you get at all.

Instead, after handing over your cash to purchase The Breakout Code (which I don’t recommend doing), you just get access to a 21 video “training” series.

And I use the word “training” very lightly.

The videos focus on teaching you how to create a sales funnel using ClickFunnels, how to find products to promote as an affiliate & then how to drive traffic to your funnels using solo ads.

But after personally being involved with affiliate marketing for several years, I can tell you that this is not a good method at all & there are 2 main reasons that I say that.

And the second reason I say it is because solo ads (the type of ads that it encourages you to spend money on) are renowned for providing completely rubbish results.

They are literally one of the worst forms of advertising available.

So this means that if you do indeed sign up to The Breakout Code & try the method that they teach, you’ll likely just find yourself spending money rather than actually making it.

But obviously the creators of The Breakout Code won’t care because they’ll have already earned at your expense when they tricked you into signing up with their hyped-up claims.

As far as I am concerned there are simply many better places where you could get started with affiliate marketing & actually stand a good chance of getting results, such as Commission Academy.

There’s no need to waste money on programs like The Breakout Code.

But on the topic of money, that brings me onto…

Admittedly, at a seemingly small fee of just $12.95, purchasing The Breakout Code program can seem tempting – but be aware because that cost is by no means the full cost.

Instead, the $12.95 is basically just a “hook” that’s been put in place so that the creators can get your card on file to set you up for 1-click billing.

You see, if you do hand over your cash & join then immediately after signing up you’ll just be forced through a string of additional expensive upsells, which, if purchased, could see you being charged hundreds of dollars more on top of the initial $12.95.

And then even once you’re in the program, the costs are still not over because as I mentioned in the previous section of this review you have to purchase additional tools & also spend money on advertising.

The additional tools you need to purchase are ClickFunnels (which starts at $97/month) and then an autoresponder which typically starts at around $19/month.

So as you can probably see, the cost soon adds up even if the initial fee does seem low so don’t get tricked into joining by thinking that it’ll just be a cheap way to earn money.

And on top of that, if the method could really generate you so much money so easily, then you have to question – why on earth would the guys behind it be selling it for $12.95?

And in the same breath, why would they be selling it at all? Surely if the method was so easy they could just earn from it themselves, rather than earn by selling the method.

None of it makes sense… And that’s because it’s all BS.

You see, here on my blog I actually practice what I preach. I do affiliate marketing full-time, and all of the information I put out about it, I put out completely free of charge.

After all, there’s plenty of opportunity for everybody.

But when it comes to The Breakout Code, the guys behind it are making their money by simply selling the opportunity to make money onto other people… Whilst claiming that they have a “secret method” for earning.

If they really had a secret method, they either wouldn’t be selling it at all, or they’d be giving it away for free. It makes no sense whatsoever to charge people to access it… Unless that’s the only way they’re really making money.

Is The Breakout Code a Scam?

The Breakout Code isn’t a “scam” as such, since you do actually get some training in return for your money (and since you can actually apply for a refund)… However, it is, in my opinion, very misleading.

There is just simply no way that you’re going to make “1 click” and see yourself earning thousands of dollars through affiliate marketing thanks to some kind of “hack”.

That’s just complete utter nonsense and they know it is. The truth is that they’ve just hyped-up their sales page in an attempt to trick you into handing over your cash so that they can earn at your expense.

I mean yes, you can indeed make good money with affiliate marketing, you can even make thousands of dollars per day with it… But it takes work, there are no 2 ways about it.

The good news, however, is that if you are prepared to put in the work to make it happen then there are plenty of legitimate places where you can get started, such as Commission Academy.

And I’ve even put together my very own getting started guide right here.

But whatever you decide to do, I just hope that my review of The Breakout Code here has given you a good insight into what the program really entails (and why it won’t really work).

And of course, if you happen to have any further questions or comments then don’t hesitate to leave them below.