The WiFi Millionaire system claims that it can generate you a full-time income from anywhere in the world (providing you have access to WiFi of course). 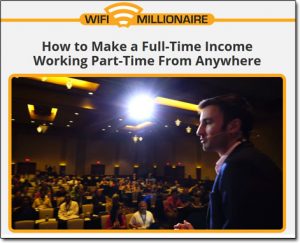 It’s quite a bold claim & Matt Lloyd (the guy who’s created it) makes it seem like it’s really easy, but is this WiFi Millionaire system actually as good as it sounds & is it something that you should be getting involved with?

Those are the two things that I’ll be looking into in this review, so if you’ve come across this system & you’re trying to find out if you can actually make money with it then rest assured you’ve landed in the right place to find out.

What Is WiFi Millionaire?

The WiFi Millionaire system is actually not a standalone system, it’s essentially a “side-door” into an opportunity named MOBE which you may already have heard of & if you haven’t, I’ve reviewed it here.

MOBE is basically a top-tier network marketing company that sells educational products related to online marketing. The initial “buy-in” to MOBE is $49 but there are numerous upsells which will set you back anywhere between $2k to almost $30k.

You can potentially make money with MOBE but you’ll find it difficult to get things rolling & earn any sort of substantial amounts unless you buy in right at the top. This is because in order to earn commissions on their products you must first purchase them yourself (which is something I personally don’t like).

Basically, MOBE is a legitimate opportunity however there is substantial investment & risk involved.

And don’t be fooled into thinking that once you’ve invested the system will do everything for you, because it won’t. Becoming successful with top-tier opportunities like MOBE requires a lot of hard work.

How Do You Make Money With It?

Whilst the WiFi Millionaire system (aka MOBE) claims to teach you how to make money by selling high-ticket offers it’s clear that the training is geared towards reselling the MOBE products themselves.

This means that in short making money through MOBE consists of buying the MOBE products yourselves (to qualify to earn commissions on them) and then trying to get other people to buy them too.

Whilst the products do hold some degree of value I personally do not feel that they justify their enormous price tags, plus as mentioned above the training is heavily geared towards the reselling of MOBE so the training is hard to transfer to other business ideas. In my opinion, they’ve been priced with commissions in mind as opposed to quality & that was the reason I chose not to recommend MOBE in my review.

And It’s Not Easy…

Whilst MOBE is not technically a scam since there is potential to make money, the money isn’t going to come easy at all. The whole business model is focused around making money by selling high priced items (up to $30k) & believe it’s not easy at all to get somebody to whip out their credit card & purchase a $30k product recommended by somebody they just met on the internet.

To become successful with a top-tier network marketing opportunity like this you’ll not only be busy building a business but you’ll be busy building relationships too since they are the key to making high-ticket sales.

So my problem doesn’t really lie with MOBE itself, it lies in the sales funnels that they use to get people to buy into the opportunity. If they were completely upfront about how it works then I wouldn’t really have any issues but instead, they have launched several sales funnels like the WiFi Millionaire system (and the Ultimate Dot Com Lifestyle) that kind of “trick” you into thinking that it’s much easier than it actually is.

Is WiFi Millionaire a Scam?

Whilst you can earn money through this opportunity it’s not going to come anywhere near as easy as it’s made out to & for that reason I won’t be recommending the WiFi Millionaire system or MOBE opportunity to you.

In order to see any sort of real success with this particular biz-op, you’ll be required to invest a lot of money, time & effort. Plus after all that is spent, you are going to feel tied to re-selling this particular opportunity itself as that’s what the training is highly geared towards, whilst it’s true that some of the training can be applied to other businesses I personally don’t feel there’s enough directly transferable training to justify the costs involved.

So my verdict is that essentially it’s not a scam (since you can actually make money) but it’s an opportunity that requires a high level of investment & also with that it means it carries a lot of risks.

Since this system is primarily targeting people who are new to online businesses I won’t be recommending it as I feel there are much better and much cheaper ways that you can get started online. It’s possible that a very experienced online marketer could “make it work” but it’s also worth noting that MOBE has been around for many years meaning the opportunity has become fairly saturated.

Anyway, hopefully, you were able to get all the information you were looking for from my review but if you have any additional questions or comments then feel free to leave them below.

2 thoughts on “WiFi Millionaire Review – Can It Really Generate You An Income From Anywhere In The World?”