Wondough is a relatively new website & it claims to pay you in return for completing a whole variety of different tasks including completing surveys, visiting websites, downloading videos & even for following suggested people on social networks like Twitter. 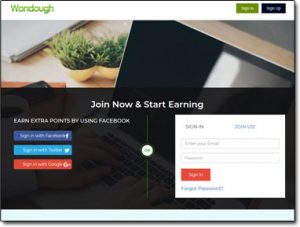 But with it being pretty new & not much information being available about it the whole thing looks a little suspicious – so what’s the deal?

Is it actually legit or is Wondough a scam that’ll just have you wasting your time?

Thankfully you’ve landed in the right place to find out because I’ve done the digging & in this review, I’m going to be sharing everything there is about Wondough that you need to know, including most importantly whether or not you can really make money with it.

Wondough is a new website that claims to provide you with a whole bunch of easy ways to earn money online – in fact, you can actually start earning by creating an account on their site (but don’t rush & do it until you finish reading this review because there are some important things you’ll need to know).

Through the Wondough site, you’ll earn what they call Wondough ePoints (sadly not real money) & you’ll get 80 of these points added to your balance when you initially create your free account.

From there you can then earn more Wondough ePoints by completing short, simple tasks provided through their website. These tasks include things like installing apps, following certain social media accounts, completing offers & visiting recommended websites.

Whilst these Wondough ePoints can’t be redeemed for cash or withdrawn via PayPal or anything like that, once you have enough of them you can request to exchange them for gift cards which can be used at most leading retailers.

Honestly, the process of earning money (or should I say gift cards) through Wondough is actually pretty simple, though the reality is that you likely won’t be able to earn anything other than pocket change through their site.

On top of that Wondough is a relatively new site & there doesn’t seem to be any fantastic reason to use their site over the already established ones (such as super high payouts) so whilst Wondough does seem to be legit, personally I would probably pick an established site instead that has a proven track record of providing quality customer service. You can click here to access a list I’ve put together of similar sites to Wondough.

Basically, you sign up & create your free account, then after doing so you’ll be given access to the platform & you’ll see that your account will have been credited with 80 Wondough ePoints for signing up.

This on its own isn’t too fantastic though because you can’t actually cash out these points since you need to have an awful lot more to meet their minimum withdrawal limit. In order to get more, you’ll have to complete some of the tasks that are you presented to you on the dashboard.

These tasks are ever-changing but generally include things like following people on social media, signing up to specific websites, downloading apps to your phone or installing things on your computer etc… You get the idea.

The tasks are all supposedly short & simple therefore they typically shouldn’t take you much longer than 10-20 minutes per task.

Finally, once you have enough ePoints racked up within your account you’ll be able to request to have them converted to a gift card. You can either get the gift card sent to you electronically or alternatively have it sent to you in the post. Sadly though as mentioned at the start of this review there is no option to be paid directly in cash.

There are many similar sites to Wondough available online so with Wondough being brand new why should you trust them & why should you sign up to their site rather than any of the other ones? I figured I’d put a list of pros & cons together to help you decide…

Well as far as I’m aware the Wondough site is legit, but truthfully since there are so many established sites out & Wondough is brand new I really wouldn’t pick them over the others. Instead, I would recommend that if this is the type of site you are interested in joining you should check out the alternatives instead.

Maybe if Wondough had launched in the marketplace offering much higher payouts or something like that then you could potentially be inclined to choose them over the established sites but as it is I just don’t see any reason too.

The other thing I’m not a big fan of with Wondough is the whole concept of downloading things & installing software to earn points. This could be quite risky because essentially you don’t really know what things you are putting onto your devices. Wondough doesn’t really provide much assurance that the apps/software has been vetted by their team prior to them recommending it to you.

But as I say as far as I am concerned there is just simply no reason to pick this site, a brand new website, over any of the other established & reputable sites that are already out there in the marketplace.

So with that being said, I won’t be recommending Wondough to you & hopefully, you can see why. If you do happen to have any further comments or questions on it though please do feel free to leave them below.