Have you received an email or come across the sales video promoting the new “magic” Zippo Pay button? 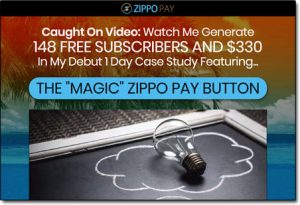 Are you now wondering what it’s all about & whether or not it really lives up to all of the hype?

Well Bryan Winters (the founder of the Zippo Pay button) claims that it can enable you to make hundreds of dollars per day after just 5 minutes of setting it up… But is any of that true, or is Zippo Pay a scam?

The good news is that you’ve landed in the right place to find out as I’ve personally taken a closer look into it & in this honest Zippo Pay review I’ll be uncovering the REAL truth about how it all works (and whether or not you can really make any money with it).

What Is Zippo Pay?

Zippo Pay is a new online “payment method” that’s been launched by a guy named Bryan Winters & it has created a lot of hype because the website promoting it claims that it’s going to enable people to actually make money with ease.

You’re led to believe that on top of helping you to make more money, the so-called “magic Zippo Pay button” will also allegedly send your sales page viral to generate you a whole bunch more sales too…

But is there any truth behind those claims?

Is this new Zippo Pay button really “magic” like Bryan claims? And can it really help you to earn more money?

Well in short the truth is that no, it’s not magic… And whilst the concept is fairly good “in theory”, in practice the whole thing has quite a lot of works & in my opinion there is simply no way that it will work as promised.

But you don’t just have to take my word for it when I say that, instead keep on reading & I’ll explain in more detail exactly how it all works so that you can see the flaws for yourself & see why it likely won’t work as Bryan claims…

How Does Zippo Pay Work?

So as I touched on in the previous section of this review the concept of Zippo Pay is that it will do 2 things… It will (allegedly) help you to increase your sales, and it will also help you to send your sales page viral…

But how exactly is it supposed to that?

Well essentially the idea is that Zippo Pay runs as an alternative “payment method” alongside your primary payment option… And Zippo Pay basically gives people the option to get your product for free providing they share your sales page with friends.

So what you’ll need to do if you wish to integrate Zippo Pay is add the Zippo Pay button alongside your current button (as shown below):

Then when users visit your sales page they’ll have the option to either pay money for your product, or alternatively share the sales page with a certain number of friends (as defined by you) and get access to the product for free.

The idea is that people will share the page, getting you more traffic – and according to Bryan Winters 50%+ of people will still actually pay money for your product so you’ll essentially create a “viral sales page”.

But there are some BIG problems…

Firstly I can tell you that the button will not work as Bryan describes & that if anything it will actually just lower your sales rather than increase them. The reason I can say that so confidently is because a couple of years ago I actually tried a similar thing on one of my own sales pages… It didn’t work.

If there’s an option of paid & free, people will always choose free… And in fooling around trying to refer people they’ll end up forgetting about your product altogether.

LOL – if Bryan hasn’t even implemented the Zippo Pay button on his own Zippo Pay sales page (despite claiming how great it is) then clearly it 100% doesn’t work as promised… Otherwise why would he not add it?

Aside from that though there are also some other major flaws – such as the fact that not everyone wants to share details about what they’re purchasing with friends & the fact that businesses simply can’t afford to give things away for free.

Because realistically all you’re doing here is giving your product away for free in return for people sharing your link, which ummmm… Is just the same as paying for advertising right? So you know, why not just pay for advertising instead? LOL.

You probably see what I mean now when I said that the Zippo Pay button seemed like a good idea in theory but that it wasn’t actually so good in practice. There is just no way that this thing will help you.

Who Is Bryan Winters?

On the website of Zippo Pay you’re introduced to the button’s creator who names himself as Bryan Winters (and includes a picture of himself as shown below): 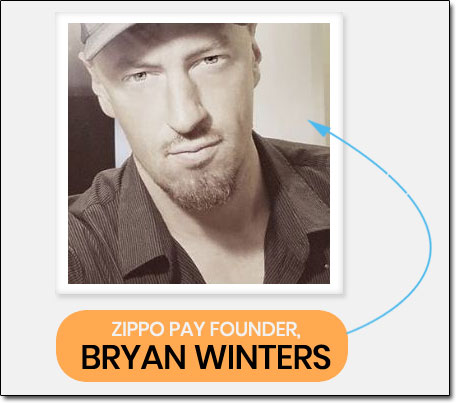 But just who exactly is Bryan Winters? And does he really have your best interests at heart?

The reason I found myself shocked is because I discovered that the same Bryan Winters is behind a number of other programs such as 5 Figure Day, MoolaVine, ShopMonopoly, ViralLightning & so on…

And those are all programs that essentially also promise access to easy riches.

So it seems to me that the truth is Bryan Winters doesn’t really have your best interests at heart. Instead it seems like he is just pumping out program after program promising to provide people with access to easy riches just so that he can earn some money at their expense.

Can You Make Any Money With Zippo Pay?

Well the truth is the Zippo Pay button isn’t really a “magic button” like it claims to be, and all it really does is enable people to get your product for free by sharing the page with others… So technically it’d be more likely to make you lose money than to help you make it…

And that’s likely the reason why the creator of the product isn’t actually using the product on his own sales page – because it doesn’t work as promised.

So whilst the website dishes out a lot of hype about it being able to make you automated commissions I would just take it with a pinch of salt. It’s all just trickery to get you to hand over your hard earned cash.

Anyway with that being said I think it’s time for…

Is Zippo Pay a Scam?

Well no, Zippo Pay is not a scam – but in the same breath it is simply not going to work as advertised. It boasts claims of being able to help you make automated money but in reality that is just not going to happen.

I can say that confidently because like I mentioned earlier in this Zippo Pay review I myself once ran a similar thing on one of my sales pages. I expected people to share it and to “multiply my traffic” but that just didn’t happen.

Instead when I placed the button on my own sales page my sales actually dropped, so I ended up removing it. It seemed like people went for the free option but then didn’t bother sharing it, and then just left the page…

And also the Zippo Pay costs $20 per month which in my opinion is extremely expensive, because all it is is a button… It’s nothing special & you could probably hire a coder for 1 hour to build the thing for you for just a one-off $20 – so in my opinion it is also overpriced.

Therefore with all that being said it is safe to say that I am not going to be recommending the Zippo Pay button to you. Instead I’ll be doing the opposite & advising that you save your money.

If you really want to learn how to increase your sales then why not just go through some proper training like that which can be found over at Wealthy Affiliate? It’s there you’ll learn how to make more money.

Or if you’re just looking for ways to make money online in general then why not check out my top picks page here for some good places to start. 🙂

Hopefully though my Zippo Pay review here has given you a good insight into how it works & answered any questions you might have had, but of course if you have anything further to add then don’t hesitate to leave a comment below. 🙂