The 1K in 1 Day system has allegedly been put together by a guy named John Becker & as the name suggests it claims that it can enable you to generate as much as $1,000 per day online through automated binary options trades. 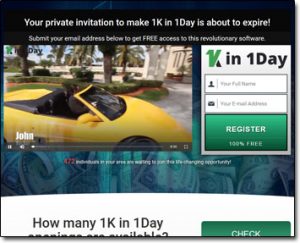 You’re led to believe that all you need to do is sign up, deposit & run the software to begin making money entirely on autopilot…

But is it actually legit or is 1K in 1 Day a scam that’ll just see you losing money rather than making it?

Thankfully you’ve landed in exactly the right place to find out because I’ve taken a closer look into this program & in this review, I’ll be uncovering everything you need to know including how it all really works.

As I briefly touched on above the 1K in 1 Day system is make-money orientated system that’s allegedly been put together by a guy named John Becker (more on him in a moment) and it claims, as the name suggests, that it can enable you to make as much as $1,000 per day… Even on the very first day that you get started.

Now it might initially seem like a dream come true, I mean who wouldn’t want to earn $1k per day on complete autopilot? Alongside money freedom, it would give you time & location freedom too… The world would be your oyster.

And that’s exactly how the video promoting the 1K in 1 Day system sells it to you – it attempts to draw you in by showing you various images of fancy cars, luxury holidays & huge mansions…

But in reality, the system is nothing but a fake & it won’t help you make so much as a single penny. It’s a complete scam that’s been put together purely in an effort to make the creator wealthy at your expense.

The reason I can be so confident about that right from the get-go is that I’ve seen this exact scam before. The 1K in 1 Day system is just a re-hashed version of a program named 1K Daily Profit.

They’ve just changed their name in an attempt to escape the negative reviews & scam even more people.

John Becker, the guy who’s allegedly created it isn’t even real. The image shown of him on the 1K in 1 Day system’s website has merely been taken directly from a stock photo website as shown below:

And that’s not the only lie you’re told – the whole website is full of lies, but you’ll soon begin to see that as I show you how it all really works…

Essentially the 1K in 1 Day system is just a typical binary options scam – something I’ve seen several times before on this blog. The problem with them though is that they can easily catch you out…

The website for 1K in 1 Day system is nothing more than a ploy that’s been put together to trick you into wanting to just “try it out”, and that’s how the crooks behind this scam manage to get your cash.

You see they lull you into the false sense of security of thinking that you’ll be able to simply sign up, deposit some funds – “test the water” and then be able to withdraw them if you find it doesn’t work as promised.

In reality, that’s not how it really works because both the broker and the creator of this system (who remains anonymous) are in on it together. Once you deposit those funds they’ll be gone for good – and sadly you’ll be left to find out the hard way that the system doesn’t actually work as promised.

Instead of profits, you’ll see that the system actually makes nothing but losses.

And even if you manage to stop the trading before you lose all your money, you still won’t be able to get any of it back. The broker will either ignore your withdrawal requests or point blank refuse them.

Everything you’re told via the website promoting the system is total lies.

Let Me Expose The Red Flags

The truth is that these binary options scams like the 1K in 1 Day system are littered with red-flags. If you have any experience online you’ll likely know straight away it’s a scam but unfortunately, they specifically target newcomers or those in desperate situations who are literally willing to try anything…

So I want to take a moment to point some of the red-flags out to you here so that hopefully if you come across anything similar in the future you can dodge it without ending up getting burned.

The creators of the 1K in 1 Day system (and other scams like it) know that there’ll likely be many negative reviews about their websites online so they try & prevent you from going looking for them by rushing you straight through the signup process.

The 1K in 1 Day system says things like “your private invitation is about to expire”, “spots are running out” and that “472 other individuals are currently looking at the page” but these are all flat-out lies.

It’s just trickery to get you to sign up first & look for reviews after – but of course, by then it’s too late. Sadly though that’s one of the main things that catches people out when it comes to these scams. Don’t be fooled by it.

2. No Ownership Details / No License

By law, any companies operating within the investment industry must display their registered office details prominently on their website & alongside that they must also display their license number/details too.

Surprise surprise the 1K in 1 Day system displays neither of these – well, none that are legit anyway. They claim that the parent company is named “1k in 1day UM LTD” but a quick Google search reveals it doesn’t even exist.

You should never, ever invest money with a company that doesn’t display these details since they could just potentially shut up shop & disappear with your cash right after you deposit it. Way too risky!

3. Claims That Are Simply Too Good To Be True

There’s an old saying that “if it sounds too good to be true, it probably is” – and that couldn’t be more fitting for the 1K in 1 Day system. Sometimes you just have to step back & take a reality check… Ask yourself if it was really so easy then why isn’t everybody doing it?

I mean come on, if a system could really generate people $1k per day on complete autopilot then the world would be left in crisis. Everybody would be quitting their jobs left, right & centre.

The truth is that yes, the internet can provide you with several ways to make good money however it’s not magical & none of them are going to see you getting rich quickly with little to no effort. Do you know what those are called? Get-rich-quick scams!

Yes, it is, there’s no doubt about that – the 1K in 1 Day system should be avoided at all costs. It’s a binary options scam that’s set out purely to make the creator (and the broker) wealthy at your expense.

The whole website is built upon lies & it’s nothing but a ploy to trick you into parting with your cash. They just want you to think that you can “try it out” without risk & then boom that’s how they catch you out.

If you happen to deposit any money then there’ll be little to no chance of you getting it back, even if you don’t end up trading with it all. The brokers will either ignore or point blank refuse any withdrawal requests.

Therefore I won’t be recommending the 1K in 1 Day system because it’s not going to help you at all. If you really want to make good money online then you must be prepared to put in some degree of work… But there’s good news if you are because there are legitimate programs like Commission Academy that will show you step-by-step how to get started.

Anyway, I hope my review gave you the insight into this system that you were looking for & more importantly I hope it helped save you some cash. If you do happen to have any further comments or questions then don’t hesitate to leave them below & I’ll do my best to respond to you as quickly as possible.

2 thoughts on “1K In 1 Day – Scam or Legit System? My Review Exposes What’s Going On”