The $500 Cash Club program claims to be something that can help you make money & change your life by working from the comfort of your home. Plus, it even promises you a guaranteed $500 bonus just for signing up. 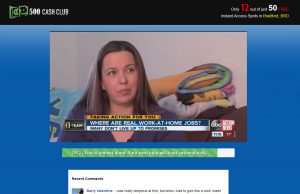 But is it actually legit? Or is the $500 Cash Club a scam that’s just out to part you with your hard-earned cash which will inevitably see you with even less money than you started out with?

I’ve done the digging & in this review, I’m going to be sharing what I found.

The $500 Cash Club is a website that’s been designed to get you very hyped up about the potential opportunity of being able to make quick & easy money online, but in reality, it’s not going to help you at all.

That’s because the $500 Cash Club is actually just a sales funnel that’s been put together to get you to buy into a completely separate online business opportunity called MOBE (which in total could set you back over $50k).

I assumed that was the case from the moment I saw the promise of a guaranteed $500 because MOBE says that if you don’t make money with their program they’ll give you your money back & pay you $500 on top – only in all the years it’s been running I’ve not seen a single person be successful in qualifying for that $500.

This isn’t the first sales funnel I’ve seen launch promoting MOBE though, I’ve actually seen quite a few – just this month alone I uncovered 2 others named the 21 Step Millionaire Coach & My Millionaire Mentor.

So basically this means the $500 Cash Club system isn’t actually a system in it’s own right like it makes out to be, it’s just a website that’s been created by an affiliate of MOBE who wants to get you to sign up with MOBE so that he or she can earn a commission at your expense.

The reason this affiliate has created their own standalone sales funnel is so that they can then list it on various affiliate networks to get other affiliates to promote it for them which means they’ll be able to get more signups into MOBE & ultimately earn more money than if they were just to promote it all by themselves.

But you don’t really need to know all the detail about that – you just need to know that basically the $500 Cash Club website is full of hype & has purely been designed to get you to sign up with something else.

Naturally, you’re probably now wondering what MOBE is so let me explain that to you – basically, MOBE is what’s known as a high-ticket network marketing company.

In short, this basically means that they sell expensive products (high-ticket) & that they give you the opportunity to earn commissions by reselling these products onto other people.

But being a network marketing company as well as earning solely from your own efforts they also give you the ability to earn from the efforts of other people that you recruit into the business opportunity that also go on to sell the products too.

The products they sell are all mainly digital courses & live events that focus on teaching people how to start an online business – but in my opinion whilst some of the training is good, rather than focusing on teaching you how to build your own standalone business it’s quite heavily focused around teaching you how to resell the actual MOBE opportunity itself onto other people instead.

It’s similar to Digital Altitude (which you may have heard of) in the sense that it’s one of those opportunities that claims to teach you how to make money but you actually make money by selling the stuff they teach onto other people.

That’s why I’m personally not a very big fan of it – well, that & the fact that it’s a pay-to-play program which means if you want to become eligible to earn commissions on the products you’ll first need to purchase them yourself which introduces a lot of risks.

Especially when the full product range could set you back over a whopping $50k in total.

So basically it’s a program that will see you investing a lot of money before you’re even able to get the ball rolling, and whilst in my opinion, it claims to be newbie-friendly in my opinion it’s something that the gurus are using to actually take advantage of the newbies & make money at their expense.

Don’t get me wrong MOBE is technically legit but there’s just no need to pay such crazy fees & make such great investments when you can get similar if not better training elsewhere for free at places like Commission Academy for example.

Anyway if you want to you can read my full review of MOBE here but ultimately it’s not a program I recommend due to the fact that only a very small minority of the people who join ever manage to see success – sadly most don’t even get their initial investment back.

In my opinion yes, it is – whilst the program it sells you into (MOBE) is technically legit, the way that the $500 Cash Club sells you into it is very misleading & I think you’d find yourself disappointed after handing over your money.

For that reason, I’m calling it out as a scam – because essentially it’s making out as if you can start making money quickly & easily through some sort of online job but that’s not the case.

Instead, it sells you into MOBE which is not a job but a business opportunity & so there is no guarantee of success – you’ll be expected to invest an awful lot of money & then in order to make that money back & turn a profit you’ll be expected to then sell the very same program onto other people earning commissions at their expense.

MOBE on its own isn’t an opportunity I recommend because I believe there is simply far too much risk involved with it, but the $500 Cash Club promotional sales funnel just makes matters even worse – in reality, everything you’re told through it is lies.

So for those reasons, I’ll be giving the $500 Cash Club system a big thumbs down and I certainly won’t be recommending it because it’s clear to me that it’s only been designed to make the creators rich at your expense.