In this review, I’m going to be taking a closer look at the 21 Step Millionaire Coach system which claims to be a “done-for-you” online business that has paid out over $73,467,332 to 3,576 people all over the world. 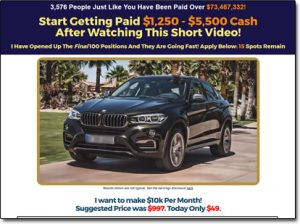 You’re told that by finding the website you too also have the opportunity to get your own “done-for-business” & that you can make the same kind of money, but is it really legit? Or is the 21 Step Millionaire Coach a scam?

That’s exactly what I’m going to be getting to the bottom of here in this 21 Step Millionaire Coach review as I’ll be uncovering what it’s all about, how it all works & whether or not you can actually make money with it.

What Is 21 Step Millionaire Coach?

Upon landing on the website for the 21 Step Millionaire Coach you’re presented with a video that doesn’t really do much other than throw images of “the dream lifestyle” in your face to get you hyped up about the potential opportunity of making money online. Even if you watch it right to the end you’ll notice that hardly anything is really explained.

However, the one thing that is stressed is the fact that you can literally begin making commissions of $1,250 – $5,500 just moments after watching the video through some sort of “done-for-you” online business.

But the problem is that before you can get access to this “10k per month system” you have to hand over some of your own cash first, which is a little bit odd don’t you think?

I mean if this system can generate 10k per month so easily as it claims then why on earth has the creator gone to such extreme efforts to try & sell it to us for a measly $47? Suspicious in my opinion!

That’s Because Things Aren’t Quite As They Seem…

After progressing through the system & reaching the signup page I found out that the 21 Step Millionaire Coach system isn’t actually a system at all – it’s just a sales funnel that’s been put together with the intention of getting you to buy into the MOBE business opportunity (something I’ve previously reviewed here on this blog & didn’t recommend).

But this isn’t the first sales funnel that’s launched promoting the MOBE opportunity, in fact over just the past couple of weeks alone I’ve come across around several different ones with 2 that spring to mind being the My Millionaire Mentor & My Home Job Connection systems. These both made out to be standalone systems but it later turned out they were selling you into MOBE.

Now don’t get me wrong MOBE is technically a legitimate business opportunity, but it’s what’s known as a high-ticket network marketing company. In short this basically means they sell expensive products & give people the opportunity to earn large commissions by reselling the products onto other people (hence the promised $1,250 – $5,500 commissions made by the 21 Step Millionaire Coach system).

And this might not initially sound too bad – but the problem is that it’s a pay-to-play program which means if you want to be able to earn commissions on the products then you’ll need to purchase them yourself first.

So combine the fact that it’s high-ticket (expensive) & pay-to-play, that means you’re going to see yourself putting in some serious level of investment before you even get the ball rolling with the opportunity.

And in the case of MOBE that particular investment could add up to over a whopping $50,000!

In my opinion that just poses as being way too risky, especially if you’re just starting online. In my opinion, it’s a system that’s more reserved for the gurus. I personally believe that something like Commission Academy (which is a free) is a better starting point for beginners. That way you’ll be able to learn the ropes & get started without having to part with a huge sum of money.

Why Does This System Exist?

You might be wondering why somebody has gone to all the effort of creating a standalone system that’s just designed to get you to buy into an entirely different opportunity so let me clear that up.

Basically, the products inside MOBE are all designed to teach you how to build an online business, but whilst some of the bits can be taken away & applied elsewhere, the main focus is on training you how to resell the MOBE opportunity itself.

So whilst I’m sure some people do sign up to MOBE & then go on to promote other things using the training, it’s clear that the majority of them then go on to resell the MOBE opportunity to other people.

And that’s where the 21 Step Millionaire Coach comes into play – as this is basically a system that’s been created by an affiliate of MOBE in an attempt to refer more people into the opportunity so they can earn more money.

The Problem With 21 Step Millionaire Coach

The issue here is that whilst MOBE in itself is technically a legitimate (but in my opinion very risk) online business opportunity, the 21 Step Millionaire Coach system sells you on a pack of lies.

The 21 Step Millionaire Coach makes out as if you’ll simply be able to sign up & start making money without really having to do anything but in reality that couldn’t be further from the truth.

MOBE as I mentioned above is an online business opportunity, with the key word being “business”. This means it will take a lot of time & effort to turn it into something profitable – it doesn’t just make money out of the box like you’re promised it does through the 21 Step Millionaire Coach system (this is just the affiliate hyping you up to increase the chances you’ll sign up).

You see whilst the internet can make it much easier for people to start a business, unfortunately, it’s not magical & it isn’t going to see you making lot’s of money without doing anything – if it could then everybody would be doing it.

And the other bad thing about the 21 Step Millionaire Coach program is that it completely hides all of the costs involved with MOBE, you’re led to believe that the suggested price was $997 but you now get access for just $47. This is true in one sense but once you’re inside the program you’ll be upsold on products which could see you spending as much as $50k!

Is 21 Step Millionaire Coach a Scam?

In my opinion yes it is because it’s selling you into the MOBE business opportunity on a complete pack of lies & I’m almost certain that if you happen to buy into this program you’ll find yourself disappointed.

But the reason you’ll find yourself is not the fault of MOBE, it’s the fault of the 21 Step Millionaire Coach system because it’s sold you into MOBE by making out like it’s an easy way to make money, which it’s not.

It’s clear to me that this 21 Step Millionaire Coach system has been created by an affiliate who’s only interested in getting as many people to sign up to MOBE as he (or she) can to earn lots of commissions.

The person behind this program obviously doesn’t really care about your success – they just want to make a quick buck on the front-end by getting a whole bunch of people to buy-in for the initial fee of $47.

The chances are the majority of the people who do buy in will leave when they find out how it really works, but I’m sure some will stick around & then they’ll get suckered out of even more cash.

So whilst MOBE as a standalone product is technically legitimate, as you can probably guess I will be giving this particular 21 Step Millionaire Coach system a huge thumbs down & certainly won’t be recommending it.