My Home Job Connection is a website that claims it can help you find real work at home job positions & it even claims that the majority of the jobs listed on their website pay as much as traditional jobs too. 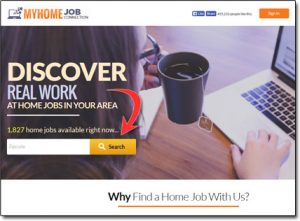 So is actually legit? Or is My Home Job Connection a scam that’s only somehow out to part you with your hard-earned cash? And if it is legit then can it really provide you with a high-paying job online?

Those are the exact questions I’m going to be answering right here in this My Home Job Connection review which means if you’ve been thinking about signing up with them then you can rest assured that you’ve landed in the right place to find out everything you need to know about it before you do.

What Is My Home Job Connection?

My Home Job Connection is a website that claims to be able to fix you up with work from home positions that pay roughly equivalent amounts to traditional jobs, so essentially a full-time income from home.

You’re led to believe that after signing up to My Home Job Connection you’ll be given access to a directory of “real jobs” where you’ll be paid set amounts in return for your time or for completing tasks.

They even claim to have positions available at several well-known & well-trusted brands like Netflix, Apple, Amazon & Target as you can see outlined in the screenshot below:

At a glance it all looks quite legit & the website certainly looks professional, however upon scrolling down the page I happened to notice a sentence in the disclaimer at the bottom which made me quite sceptical.

As you can see in the screenshot below the sentence reads “The typical user of our website does not make any money using this system”, which I think you’ll agree is very worrying indeed.

Whilst you’re led to believe that you’ll be given access to some sort of jobs directory with the jobs listed paying you directly in return for your time or the tasks you complete, in reality, that’s not the case.

Instead after signing up with your name, email address & phone number what you’ll actually find inside is a whole bunch of make-money business opportunities, not “jobs” as you were promised at the start.

Initially, after signing up you’ll be told that you’ll be started on their fast-track $100 in 24 hours program which they’ve put together in an attempt to show that yes, it is really possible to make money online.

The first thing they’ll tell you to do is sign up with the 3 paid survey companies that they recommend, then after that when you proceed to step 2 you’ll be pitched an entirely random business opportunity which they claim can earn you up to $3,736 per week. In my instance, the particular job opportunity I was promoted was MOBE, which is a risky high-ticket network marketing opportunity.

After step 2 you can then continue to the member’s area where you’ll be given access to the jobs board, but guess what? I checked every single category & hit search jobs but it returned ZERO results.

The jobs they promised? Fake!

And the member’s area is a risky place to be because the other pages inside there are literally riddled with scams, one of which you’re promoted for example is the Paid Social Media Jobs program which I recently exposed right here on this blog. It’s a scam and they’re claiming that it’s a great opportunity… Lies! 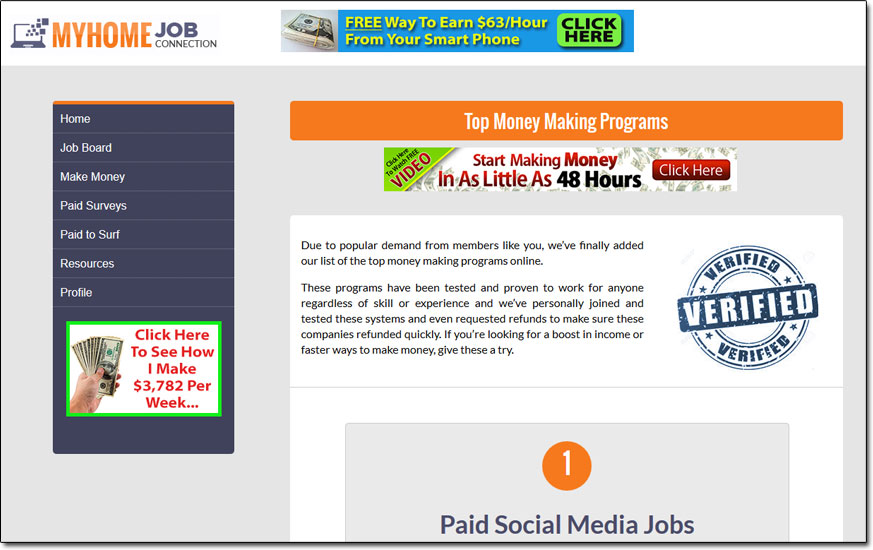 Whilst there are a handful of websites in the member’s area that are legit, such as paid survey websites – these websites won’t see you earning any amazing amount of money like you were promised.

What It’s Really Been Designed To Do

It’s clear to me that the My Home Job Connection program has been built with one intention in mind & one intention only, which is to make the creator of the program filthy rich at your unfortunate expense.

Each of the links that are provided in the member’s area of the program are affiliate links, which means that the creator is earning money whenever you sign up to any of the websites that he or she recommends.

Some of the websites in the system that the creator is promoting like MOBE, for example, could see you potentially spending in excess of $50,000 which I think you’ll agree is a crazy amount.

And yes whilst that particular opportunity is technically legit, it’s not a “job” like My Home Job Connection makes out, it’s a business opportunity which means you might not see any returns on your investment for quite a while – if you manage to see any at all (because it’s a business & you need to make it a success).

Is My Home Job Connection a Scam?

In my opinion yes it is, the information that you’re provided with is completely misleading & it’s clear to me that this program has been put together with the sole intention of making the creator rich at your expense.

Some of the things promoted in the member’s area are legit & free to join like the paid survey companies but they won’t see you earning any amazing amount of money like you’re promised at the start.

The other things that are promoted are questionable, to say the least, and some of them like the Paid Social Media Jobs program are most definitely scams that could see you losing a lot of money.

So as you have probably guessed I am not going to be recommending this program to you & instead it’s going to be getting a huge thumbs down from me as ultimately I believe it’s nothing more than a scam.