The 7 Figure Breakthrough system claims to provide you with everything you need to start earning an income of $2,740 per day online & it even claims that you can make that kind of money with absolutely no experience whatsoever. 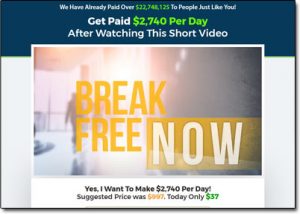 Apparently, all you need to do is “plug-in” to the system & you can supposedly start generating money almost straight away, but first, you’ll need to pay a $37 fee which has left a lot of people asking is it legit or is the 7 Figure Breakthrough system a scam that’s set to part you with your cash?

I’ve decided to answer that question once & for all & in this 7 Figure Breakthrough review I’ll be giving you everything you need to know about it so if you have been thinking about signing up be sure to read this page before you do.

What Is The 7 Figure Breakthrough System?

At a glance, the 7 Figure Breakthrough system looks to be a typical get-rich-quick style scam as you’re promised quick & easy money but required to hand over some of your own cash before you can get started.

However, after taking a closer look at it I found out that it’s actually not a system at all – it’s just a sales funnel that’s been put together to get you to buy into the Digital Altitude Aspire opportunity (which is something entirely separate).

So whereas you’re led to believe that you’ll be buying into something called the 7 Figure Breakthrough system, in reality, it doesn’t exist, and after handing over your money you’ll find out that what you’ve actually bought into is something called Digital Altitude (a high-ticket opportunity which in my review I decided not to recommend – I’ll explain why in a moment).

This is similar to how the Aspire Today program worked that I recently reviewed & I suspect that these two sales funnels might have actually been created by the same person – essentially they’re just “tricks” so that the people who have created them can earn more money by getting more people to signup to DA via their affiliate links.

Why I Don’t Recommend Digital Altitude

To be honest Digital Altitude is actually kind of legit but the reason I chose not to recommend it was because, in my opinion, I found it to be very borderline. Basically whilst you can potentially make money with it it seems that a lot more people are losing money instead (and some are losing many thousands to it).

You see Digital Altitude is what’s known as a high-ticket network marketing opportunity – which in other words basically means that it’s a pretty expensive program & that it gives people the opportunity to earn commissions by reselling the program onto other people.

As a member of Digital Altitude, you will learn how to promote things online & earn commissions by doing so, but you’ll be heavily pushed into promoting Digital Altitude itself as they claim that everything is “done-for-you” & that by promoting DA rather than another offer you’ll find much greater success…

And in my opinion, the training is so heavily focused on promoting Digital Altitude itself that by the end of the training you’ll probably be left feeling that in reality that’s your only option because it doesn’t actually go into much great detail about promoting anything else (or give you any tools to do it).

So ultimately it’s one of those “learn how to make money but you actually make money by selling this make money training onto other people” type programs – and it’s very similar to an opportunity named MOBE.

In fact it’s almost identical & that’s why there’s an ongoing court case between MOBE & Digital Altitude at the moment (but that’s a story for a different day).

As you can probably guess I don’t recommend MOBE either because it operates in a similar way – but MOBE was around long before Digital Altitude.

Anyway, as I mentioned above Digital Altitude (and MOBE) are high-ticket programs which means they are expensive. In fact let me stress that again, they are very, very expensive & could potentially see you spending around $50k before you even get the ball rolling.

That’s the main reason that led me into making the decision not to recommend the program – I just felt that it was too expensive & that meant it was way too risky, especially if you’re just starting out online.

There are many programs through which you can actually get started for free such as Commission Academy for example & there’s certainly no reason why you should see yourself splashing as much as $50k on some training with no guarantee of actually being able to get anything back.

You could buy an established business for that kind of money!

But Back Onto The 7 Figure Breakthrough System…

Basically as mentioned above the whole idea of Digital Altitude is that you buy into it, learn how to promote it & then start earning commissions by getting other people to buy into it too…

And that’s why sales funnels like the 7 Figure Breakthrough System are launching because people are trying to come up with ways to get more people to buy into Digital Altitude so that they can earn more commissions – they’re basically putting their own twist on things rather than using the companies default sales page which everybody else is promoting.

The problem with these sales funnels though is that they’re often over-hyped, telling you that you can make money really quickly & easily which simply isn’t true, and often they skip over the details about all the investment that’s actually required.

For example, the 7 Figure Breakthrough system tells you that you can get started for just $37 which is kind of true, but as soon as you buy in you’ll see that at that level you can’t really do much & that you’ll need to spend thousands before you can start seeing any kind of decent results.

The reason for that is because it’s what’s known as a pay-to-play program which means you can only earn commissions on the products you personally own, so if you want to earn those big commissions you’re promised by the 7 Figure Breakthrough system then you’ll need to personally invest a lot of money first.

If you only stick at the $37 level you’ll only be able to earn commissions on the $37 level & you won’t get access to all the training so essentially you’ll just find yourself stuck and pretty much forced to upgrade.

Is The 7 Figure Breakthrough System a Scam?

Well this is a bit of a difficult one & the answer is kind of yes & no because it sells you into Digital Altitude which is technically legit, but it does by feeding you complete over-hyped pack of lies.

By going through the 7 Figure Breakthrough system sales funnel you’re led to believe that you can start generating an income of $2,740 per day almost instantly after signing up with very little work which just completely isn’t the case.

The reality is that you’re buying into a business opportunity with business being the keyword therefore a lot of time, effort & investment will be required before you can even think about getting the ball rolling.

Basically what I am saying is that it’s NOT as easy as they make out.

And to be honest whilst you can potentially make money with the Digital Altitude program the likelihood is that you won’t because out of the hundreds of thousands who have joined only a very small minority of them are actually making any sort of good money from it.

Ultimately it’s more hype than substance & that’s why I chose not to recommend it because the chances are you’ll see yourself spending a lot of money but not seeing much from it in return.

Therefore overall I will be concluding this 7 Figure Breakthrough review by saying that I do not recommend this program (nor the program that it sells you into it) and I’d advise that you avoid it altogether.