The Altucher Report is something that’s been put together by a guy named James Altucher & it’s published via a company named Choose Yourself Financial. The report claims it will provide you with access to emerging investment opportunities that can supposedly make you a fortune for a secure & happy life (according to the website promoting it at least). 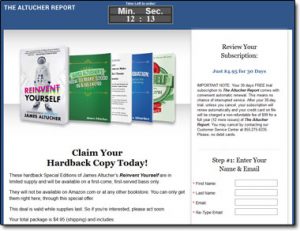 But there are several negative reviews about James online as well as the main company that’s actually behind it all, Agora Financial – so what’s the deal? Is it actually legit or is the Altucher Report a scam that’ll just see you losing money rather than making it?

Thankfully if that’s what you’ve been looking to find out then you’ve landed in exactly the right place because I’ve taken a closer look at the whole thing & in this review, I’ll be uncovering everything there is to know including how it all works & whether or not you can really make money with it.

What Is The Altucher Report?

As I very briefly touched on above the Altucher Report is an investment-focused newsletter that’s edited by a guy named James Altucher. It’s published through a company named Choose Yourself Financial which is a “branch” of a company you might be more familiar with named Agora Financial.

The reason you may be familiar with Agora is that they actually put out several other very similar publications such as the Lifetime Income Report & The Big Book of Income – both of which promise similar things to The Altucher Report.

And essentially without beating around the bush the Altucher Report basically promises that it’s going to make you wealthy. It might take a fairly longer route in saying it, but in my opinion, that’s pretty much what it says…

The website promoting it, for example, states “we deliver updates on emerging income opportunities that can make you a fortune for a secure and happy life” & if that isn’t promising you riches then I don’t know what is.

The same website also claims that the Altucher Report will show you what stocks to buy, what businesses to start & “how you can position your family to survive”.

Despite some of the seemingly over-hyped claims, it might appeal to you as potentially being quite a good report, after all, who doesn’t want easy wealth…

But based on the “trickery” they use to get people buying this report I personally was pretty sceptical about the whole thing right from the off – and as you’ll see throughout this review I think I had good reason too.

If you don’t know where I’m come from in terms of the trickery I mentioned above, let me explain…

When I first came across the Altucher Report is was actually through a page that was giving me the chance to grab a few free hardback books. These were all books that had been written by James Altucher himself, the guy behind the Altucher Report. 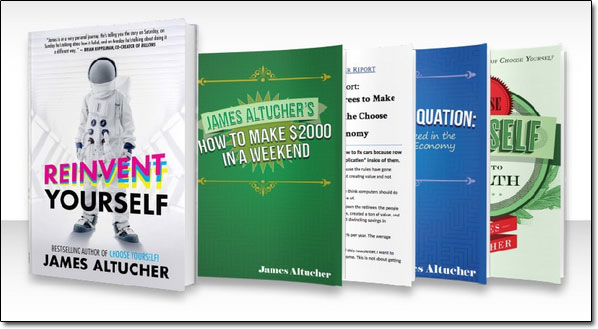 One of the books was titled “how to make $2,000 in a weekend”, so they too follow the similar bold promises that the Altucher Report itself makes…

Now I don’t know about you but I’m all for free stuff so I became pretty interested in the page expecting that I was indeed going to get something for free… Only that turned out not to be the case.

It was actually one of those “just pay shipping” gigs & in order to get access to the so-called free books you were required to pay a fee of $4.95 to cover the shipping – a common marketing trick.

There are 2 reasons companies generally use this “just pay shipping” trick – the first one is so that they can weed out the people who are actually going to spend money from the people who aren’t, and the second is so that they can get the persons credit card details on file to make future purchases easier (making it easier for them to squeeze money out of people I mean). 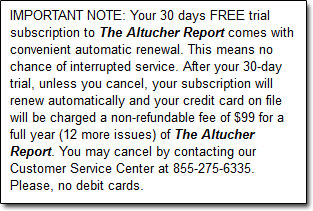 So if pay for the $4.95 “shipping” then you’ll be automatically subscribed to the Altucher Report and if you don’t cancel that within 30 days then your card will be charged an additional $99 which you won’t be able to get back.

That’s not a sales tactic I’m particularly fond of & that’s why I referred to it as “trickery” above.

The other trickery employed on that particular page is the fact that they have a fake timer which counts down from 15 minutes and attempts to rush you through the buying process. The reason I discovered it was fake is that after simply refreshing the page it starts again from 15 minutes, even after the offer allegedly expired.

But anyway it seems to be working for them – to the annoyance of many of their customers they seem to be selling a lot of Altucher Report newsletter memberships this way according to reviews online.

Can You Make Money With The Altucher Report?

The sales funnels promoting the report involve hyped-up claims & trickery – but to be honest, if the things they promise you did turn out to whole true then I guess ultimately it wouldn’t be so bad after all… The question is, do they?

Well, as far as I’m concerned in my opinion no they don’t. Essentially when you’re purchasing the Altucher Report all you’re doing is subscribing to a newsletter that’s edited by James Altucher.

Yes, James does send out investment picks & tips as promised – but ultimately these are investments that pose risk, they are not guaranteed “free money” like you’re led to believe from the promotions of the newsletter.

If you follow his advice you could indeed make money – but as many members of the newsletter have stated there is also a high chance that you will lose money just as easily, many of whom have.

Of course though this doesn’t matter to James or Choose Yourself Financial – all they’re interested in is selling newsletter subscriptions & once you’re in so there work is done. Providing they send the newsletter to you as promised (whether it be good or bad advice) they’ve technically fulfilled their part of their deal.

And it seems like the payment doesn’t stop at the subscription fee – take a look at the review I found below in which a customer says he was repeatedly upsold into a program costing around $2,000:

So to the answer is yes, you could make money through the investment picks offered by the Altucher Report but ultimately there is no guarantee of you doing so & it looks a lot more likely that they’re just out to get you to spend more money. Not to mention the fact that you could similarly end up losing money too.

In my opinion, the report is over-hyped and under delivers. If you buy into it you’ll likely find yourself disappointed.

Is The Altucher Report a Scam?

Well, it’s certainly not a scam as such – at the end of the day Choose Yourself Financial are selling a newsletter that’s edited by James Altucher and that’s exactly what they’re delivering… Just in terms of actually helping you make money, in my opinion it might not be so great.

I just personally feel like the whole thing is very misleading & that that are few too many marketing tricks in place. It kinda leans me towards thinking that the creators are more interested in making money for themselves than they are in helping you make money from the recommended investments.

Obviously that’s just my own opinion on the whole thing but I mean based on several of the customer reviews the whole thing just doesn’t look good at all. Certainly nowhere near as good as it’s made out to be in the promotional material.

Therefore I personally will be avoiding the Altucher Report & I won’t be recommending it to you either. I just feel like there’s far too much risk involved & that you could end up spending more than you ever manage to make back. In my opinion, there are many better ways to make money online.

But anyway hopefully my review gave you a good insight into this program & gave you a better idea as to whether or not you think it’s right for you. If you do happen to have any further questions or comments don’t hesitate to leave them below.