The Big Book of Income has been written by a guy named Zach Scheidt, an employee of a company named Agora Financial & you’re led to believe that the book will provide you with various “secrets” which will enable you to begin generating extra income with ease… 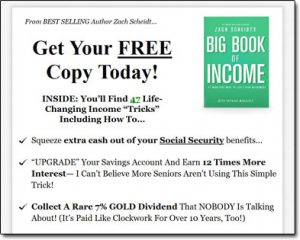 You’re promised that the book will be able to help you collect “a rare 7% gold dividend” as well as seeing you “earn $35 an hour walking on the beach” but is it actually legit or is The Big Book of Income a scam that’s just set to part you with your cash rather than help you make it?

Thankfully you’ve landed in exactly the right place to find out because I’ve taken a closer look at this book & in this review, I’ll be uncovering everything you need to know, including what it’s all about & whether or not you can really make the money they promise.

What Is The Big Book of Income?

As I briefly touched on above The Big Book of Income is a book that’s been put together by an alleged best selling author named Zach Scheidt who’s an employee of a company named Agora Financial.

You’re led to believe by Agora’s website promoting the book that it will give you access to several secrets which will see you substantially boosting your income through various different means.

For example you’re told you’ll be able to “squeeze extra cash” out of your social security benefits, and that you’ll be able to “earn $35 an hour walking on the beach” but these bold claims will likely leave you pretty sceptical.

In my opinion they just sound like something you’d commonly associate with a typical get-rich-quick scam.

But the books free right? So how it could possibly be a scam?

After scrolling down their 1,500+ word sales page (yes, sales page) you’re left to find out that in order to get access to the book you’ll need to allegedly pay for postage which will cost you a fee of $4.95.

And even if you opt to receive the digital copy instead they still force a hard copy upon you as well so there’s no way of getting around the fee. If you want to get access to The Big Book of Income you’ve got to pay $4.95, there’s no 2 ways about it.

I don’t know about you but when I get told something’s free I expect it to be, you know, FREE.

And in my opinion when you combine the fact that we’re getting tricked into paying $4.95 & presented with a 1,500+ word sales page for a “free” book things starting looking pretty suspicious as far as I’m concerned.

Especially since the whole thing is ultimately promising us “easy money”…

It reminds me of the good old saying “if it sounds too good to be true, it probably is”… And do you know what? After looking deeper into it I was right to be sceptical because this whole thing isn’t quite as it seems.

The Truth About The Big Book of Income

When you see how all this really works in just a moment you’ll probably think twice about ordering your “free” copy of The Big Book of Income because like I said above things really aren’t what they seem.

Firstly let me point out that there are 2 reasons they want you to pay the $4.95 “postage” fee…

The $4.95 is therefore essentially kind of a “test” – they know that if you pay for that you’ll be much more likely to pay for other stuff afterwards (and boy have they got some stuff in store for you to pay for).

Reason number 2 is simply because they want your credit card details & they’ve clearly figured this was a good trick to get them. You see once you enter your details to pay the “postage” costs for the “free” book you’ll also be automatically subscribed to one of their other products named the Lifetime Income Report.

If you don’t cancel your subscription within 30 days then you’ll be charged an additional $99 for the product they ever so kindly secretly subscribed you to. The reason I say secretly is because all throughout the 1,500+ word sales letter they stress how free it is & that you won’t have to pay a penny, yet as you can see below 3 quarters of the way through they add in one sentence telling you that you’ll be billed $99 if you forget to cancel…

It’s pretty easy to miss put it that way.

And that’s not the only trickery going on here… They also claim there’s only 450 copies available. As far as I’m concerned that’s a total lie & it’s been deployed purely to create some false scarcity.

The image below is a screenshot of their website in which they state only 450 readers will get access & that you should “act fast”:

The reason I’ve suggested this is fake is because the team at Agora Financial are heavily promoting this website & therefore it wouldn’t seem to make sense for them to limit the supplies of the book.

The more people that download/request the book the more money they make. Why limit it?

I see this type of thing on several websites that I review & the only reason they put things like this on is to trick you into signing up FAST. Usually companies that use these tactics don’t want you searching around for reviews… And you can likely guess why.

The reality here is that The Big Book of Income website has (in my opinion) been solely designed to get you to buy Agora Financials Lifetime Income Report – which is what they automatically subscribe you too.

So What Is The Lifetime Income Report?

Well if you want to find out the full details about the Lifetime Income Report then I suggest you check out my full review, but if you don’t have time to read that then let me summarize below…

Basically the Lifetime Income Report is a monthly newsletter that’s offered out from Agora Financial & edited by 2 guys named Zach Scheidt & Jody Chudley. Zach you’ll already know of since he’s the guy who’s put The Big Book of Income together & Jody is another Agora Financial employee.

Through the Lifetime Income Report you’re supposedly provided with “top picks” from these 2 guys & they claim that if you invest where they tell you too then you’ll be able to receive regular dividend checks just for holding stocks.

They make it seem (just like The Big Book of Income does) that you’ll be able to make lot’s of money really easily. However several of the reviews that have surfaced regarding this program do not sing it’s praises.

Take this review for example:

One guy who signed up to the Lifetime Income Report claimed that he was asked to invest a whopping $85,000 & there are many similar reviews like this claiming that Agora Financial are making false promises.

That’s why I chose not to recommend it in my review. In my opinion I think the whole thing’s very misleading & based off the member reviews I had seen there was just no way I was going to try it out… It appears to be a good way to lose money & that’s about it.

You see what you have to remember about investing is that there’s no guarantees. Whilst yes, you might stand to make money – at the same time you will very likely stand to lose all your money too.

Is The Big Book of Income a Scam?

Well it’s not a scam, if you do pay the $4.95 then you will get the book as promised which does share some interesting financial advice… However in my opinion the whole thing is very misleading & for that reason I won’t be recommending it to you.

I mean to kick off with the books offered as free yet it turns out it’s actually not, then they slip in an additional $99 yearly subscription without making it very clear & to top it all off you’re later pushed into investing crazy amounts of money.

So it’s not a scam, but in my personal opinion I think the whole thing over promises & under delivers. It seems to me like they just want as many $99 newsletter subscribers as they can get & that they’re willing to say/do anything they can to get them.

Therefore overall I won’t be personally recommending this because it just seems to be far too risky. In my opinion there are much better & safer ways to make money online that don’t require outrageous investments. If you’re interested you can read more about the program I personally use to build my own income online in my Wealthy Affiliate review here.

Hopefully my review gave you a good insight into how all of this works but if you do happen to have any further comments or questions then don’t hesitate to leave them below.

14 thoughts on “Is The Big Book of Income a Scam? Review of Zach Scheidt’s Supposedly Free Book”