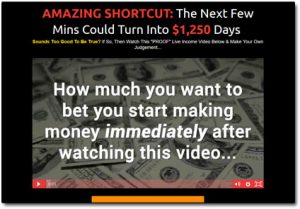 And I think you’ll agree with me when I say that that’s a pretty bold claim to make, so what’s the deal here?

Is it actually legit or is the Amazing Shortcut a scam that’s just set out to part you with your hard-earned cash?

Well thankfully you’ve landed in the right place to find out because I’ve done the digging & in this review, I’m going to be uncovering everything there is you need to know, including whether or not it will be worth your time

What Is The Amazing Shortcut System?

The Amazing Shortcut System is pretty much as the name suggests, a system that claims to be built upon an “amazing shortcut” that will see you earning huge commissions online pretty much on auto-pilot…

You’re led to believe that you can just sign up & start making commissions right away without really having to do anything. You’re also led to believe that it will be super easy & that anybody can do it, even if you don’t have much online experience.

So it’s likely that you’ll be pretty sceptical about this system because it makes a lot of big promises, in fact, that might be why you landed on this review today, to find out what it’s all about & whether or not it really works.

Well, I’m sorry to break it to you but to be honest, this system doesn’t really work as promised, in fact, it’s something I’ve previously exposed here on this blog several times before. It’s just the exact same thing but relaunched under a different name…

So what exactly is it? I hear ya, let me explain…

How Does The Amazing Shortcut System Work?

Well, firstly I want to stress here that in terms of making money or living up to its promises the Amazing Shortcut System certainly does not work, but what I’ll do is explain what’s really going on instead…

So basically the Amazing Shortcut System is just a sales page & it’s been built to get you to buy into an entirely different business opportunity named MOBE. You’ll notice this when you click the “Get Started Now” button on the Amazing Shortcut System because the button will take you to a checkout page which is actually hosted on the MOBE website. 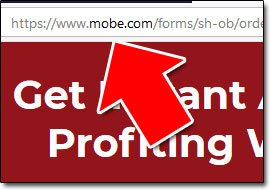 Now MOBE is a program I have reviewed on this blog, and it’s technically a legit program but I didn’t recommend it and there were several reasons for that. The main one is because it’s VERY expensive (I’m talking around $50k) and to make the real “good money” with the program you need to personally invest that level of cash into it which introduces a lot of risks.

For me that almost instantly led me to the decision of not recommending it because I know there are many free ways to get started online (such as Commission Academy) so there’s no need to spend that level of cash to get started, but that was not the only reason…

One of the other things that made me not recommend it was the fact that the whole program is really all about promoting MOBE. So essentially MOBE is a “digital marketing training course” and all of the products are related to making money online…

Anyway, to go through the course you will need to purchase these products as you go along (which will add up to around $50k) and then you will find out at the end of it that to make money through it you will just be selling the exact same opportunity onto other people…

So basically MOBE is “make money by selling this make money onto other people” type program & that’s just something I’m not really interested in.

Can you make money with it? Yes, you can I don’t doubt that & there are a few people making millions with the program but sadly I stress the word few because out of the many thousands that have joined unfortunately most of them make nothing & actually end up just losing their investments instead.

So yes you can make money with MOBE but ultimately due to the large investment as I said above it really is a big risk to take.

Like I said despite me not personally liking MOBE & not recommending it for my own reasons the reality here is that the program itself is technically legit & if you really work hard then there is the possibility to make money from it.

So that probably makes you wonder why I would suggest that the Amazing Shortcut System is a scam… Well, the reason for that is simply because this particular system sells you into MOBE on a complete pack of lies.

Yes, you can make money with MOBE but it will not come without investing a lot of time & effort on your behalf (as well as cash). The Amazing Shortcut System makes out like you can make money very quick & easily which simply is not true, so if you buy into MOBE through this program you will likely find yourself very disappointed.

However, it’s clear what’s going on here. As I mentioned above I believe MOBE to be a “make money by selling this make money onto other people” type program so to make money through MOBE you need to promote MOBE onto others as an affiliate.

I can see that an affiliate of MOBE (not MOBE themselves) have created the Amazing Shortcut System in an attempt to get more people to sign up through their affiliate link so that they can earn more commissions.

Honestly, everything you’re told is lies – making money with MOBE is absolutely not quick & easy. They certainly don’t mention anything about the absolutely outrageous level of investment you’ll be required to make if you want to get the big commissions that they promise you in the video.

Is The Amazing Shortcut System a Scam?

Well whilst the program this particular system sells you into isn’t technically a scam (MOBE) I am going to say that in my opinion, I do believe the Amazing Shortcut System itself to be a scam yes because it sells you into MOBE on a complete pack of lies.

I am very confident that if you happen to click through the Amazing Shortcut System website & buy into MOBE you will be thoroughly disappointed because you will find out that there’s a lot of investment required & that it will not be anywhere near as quick & easy as this system makes out.

Also, it seems I don’t stand alone in my verdict because this exact same has been launched before under the name Millionaires Challenge System & if you search for reviews on that you will see a huge amount of negative ones… That’s likely why it’s changed it’s name to the Amazing Shortcut System (because that’s literally the only thing that’s changed), so that it can keep scamming people out of their cash.

My advice is for you to just avoid this thing because it’s definitely no good for you. Whilst I personally don’t recommend MOBE I also want to stress that I am not slating that program itself because it is technically legit, but I just believe there are better alternatives than it like Commission Academy for example which is free.

So yeah, hopefully, my review gave you the insight into this system that you were looking for & I hope it prevented you from parting with your hard-earned cash. If you happen to have any further questions or comments don’t hesitate to leave them below.