Another week goes by & another system launches that claims it has the answer for generating you profits of $1,000 per day online all from the comfort of your own home. 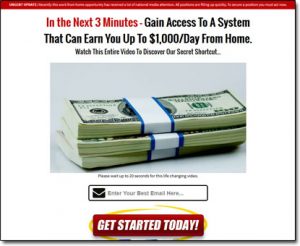 Coincidentally everything is made out to sound very easy too and of course, in traditional make-money-online fashion you’re led to believe that “anybody can do it”.

But is the Aspire Millionaires system really all that it’s cracked up to be and can it actually see you generating profits of $1,000 per day if indeed anything at all?

You’ll soon find out as I’m going to uncovering everything there is to know about this system right here in this review meaning if you’ve come across the Aspire Millionaires system & have been trying to figure out if it’s actually legit you can rest assured that you’ve landed in the right place.

What Is Aspire Millionaires?

Upon landing on the homepage of the Aspire Millionaires system you’re forced to watch a 3-minute video that claims it will reveal the answer to generating profits of $1,000 per day online & it even promises you a $1,000 guarantee which unfortunately doesn’t materialize.

After watching the video it then becomes clear that this is not actually a system in itself, it’s actually just a sales funnel that’s been put together to get you to buy into the Digital Altitude opportunity which is something that’s been getting heavily promoted over the past year or so…

In fact, I actually became a member of Digital Altitude myself but left shortly after.

Here’s How The Two Systems Are Connected… 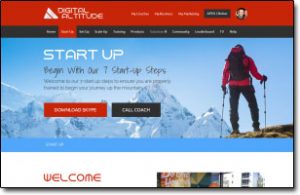 Digital Altitude is a high-ticket network marketing opportunity which in a nutshell basically means that they sell expensive products and offer the ability for people to earn high-ticket (large) commissions by reselling these products onto other people.

The catch is that in order to be eligible to earn commissions on the products you must first purchase the products yourself, and the product line adds up to a total of around $50,000 which by anybody’s books is certainly a lot of money.

So ultimately to make “the good money” with Digital Altitude that you see people talking about you’re going to be required to spend a lot of money first.

That’s the reason I left DA because I didn’t want to see people taking such a large risk without any sort of guarantee that will at least recoup their initial investment at some point.

I mean sure, you might manage to make back the amount you invest (and more) but the sad truth is that unfortunately, most people don’t.

But don’t take that the wrong way, I’m not calling it a scam – because it’s not.

There is the potential to make money, it’s just that it’s not going to come as easily as it’s made out and it’s going to require hefty investment on your part.

In my opinion, a scam is something that takes your money without your permission or totally deceives you in an attempt to part you with your cash (kind of like these types of binary systems) and doesn’t provide any potential at all to make money as promised.

Sure Digital Altitude makes things seem easier than they actually are, but with hard work, you can potentially make the amounts of money they promise.

The Aspire Millionaire system is an independent website which has been created by an affiliate of Digital Altitude (somebody who’s bought into DA, spent money on the products and is now promoting them to earn commissions).

Rather than directly promote Digital Altitude themselves this particular affiliate has quite cleverly built their own sales funnel and began leveraging affiliates to do the heavy-lifting for them.

It might sound strange that they would pay more than the initial buy-in price but the reason they can do this is that they know that they will earn more money as the members progress through the system & purchase the high-ticket products.

In fact, the creator of the Aspire Millionaire system can actually earn $10,000+ commissions from one single person through Digital Altitude so it becomes quite easy to see how they can afford to pay people $60 to promote the front-end $37 offer.

What you’ve got to realize though is that if you’re looking into the Aspire Millionaire system then you’re the person they’re going to be expecting to spend thousands of dollars as you progress through the steps. Again, you do have the potential to make money later but it’s going to be a costly outlay beforehand.

Is Aspire Millionaires a Scam?

As mentioned above the Aspire Millionaire system isn’t actually a system in itself, it’s just an independent website that’s been put together by an affiliate in an attempt to get you to buy into Digital Altitude.

I’m not going to brand it as a scam as there is the potential to make money, however, it’s going to take a lot more effort than you’re told & if you want to make the big bucks that you’re shown throughout the video then you can certainly expect to spend a lot more money than $37.

This system could actually see you paying out around $50,000 before you even become eligible to earn commissions on all of their products.

So for those reasons I’m not going to be recommending that you join the Aspire Millionaire system or Digital Altitude. I feel that there’s a lot of other products available at the moment that give much more value with much lower price tags.

There’s also no need to be spending tens of thousands of dollars just to become “eligible” to make money as there plenty of other affiliate programs that you can participate in for free & see similar sorts of results.

Anyway, I hope you enjoyed reading my review on this system & I hope it gave you a good insight into what it’s all about. If you still have any questions that you’d like answering then simply pop them in a comment below & I’ll do my best to answer them for you.