When it comes to making money online there’s certainly a lot of bold claims floating about & I’m sure you’ve seen several of yourself. 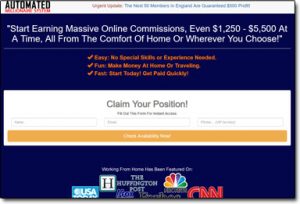 However, a system that claims it can make you an “Automated Millionaire” has to be one of the boldest I’ve ever seen yet.

I mean, come on – if a system really could generate you millions of dollars on complete autopilot it would result in the world completely collapsing as we know it. Kids would be quitting school, adults would be quitting their jobs – and everybody would be taking to the beaches of the world to enjoy their newfound riches.

And I’m also pretty certain that if such a system did exist & did work, that I’d be finding out about it via a news channel & not via a random email sent to me from somebody I don’t even know.

Regardless, even though I’m extremely sceptical about this system right off-the-bat I am still going to be taking a look into it to find out exactly what it’s about. This means that if you’ve come across the Automated Millionaire system & you’re wondering whether or not it really works you can rest assured that you’ve landed in the right place to find out.

What Is The Automated Millionaire System?

The Automated Millionaire system is something that claims it can generate you thousands of dollar commissions from the comfort of your home without the need for experience or any special skills. It also goes on to mention that you can literally begin earning the very same day you get started.

Sound too good to be true?

Of course, it does!

You see this system is actually almost identical to another system I recently reviewed named the Online Profit Shortcut. The page looks ever so slightly different but the bold income claims are the same & so is the way in which it works (or should I say doesn’t work).

Just like the Online Profit Shortcut system this so-called Automated Millionaire system is nothing more than a gateway designed to get you to buy into a network marketing opportunity named MOBE.

I knew that almost instantly after seeing that the system offers a $500 guarantee as this a guarantee offered by MOBE (kinda – more on that in a moment) and whenever a system offers this guarantee you can generally assume it’s affiliated with MOBE. In this case, I can 100% confirm it is.

Of course, you’re not told about MOBE until after you’ve purchased the Automated Millionaire system first. Once you’ve done that (at a cost of $97) you’ll then be pushed to buy into the MOBE opportunity which could see you spending a combined total of over $50k!

How Does The Automated Millionaire System Work?

The Automated Millionaire system is a system that’s been created by an affiliate of the MOBE business opportunity. Being an affiliate this means that this particular person gets to earn commissions for each new member they get to buy into MOBE.

Now marketing opportunities like MOBE isn’t all that easy, so affiliates often have to come up with new & unique ways to promote in order to keep their income consistent.

What you’ll often find is that the top-earners creating their own “products” (like the Automated Millionaire system) and then they list these products on various affiliate networks. They then get affiliates to push their product & they then pitch MOBE onto the people that buy-in.

Essentially rather than market the MOBE opportunity directly themselves they’ve come up with a clever way to get other people to do it for them.

This is why the Automated Millionaire is super hyped up – because they’re not bothered about being legit they just want as many people to sign up & buy-in as possible so that they can then go on to pitch MOBE to them.

What Do You Actually Get?

When you buy into the Automated Millionaire system what you’re actually getting is some low-level affiliate marketing training which teaches you the basics of generating commissions by promoting other peoples products online.

Whilst that might sound quite good, the training only touches on the very basics and it’s heavily geared towards pushing you into the MOBE opportunity – in fact, that’s actually all it’s really there for.

In my opinion, there is absolutely no need to pay $97 for this level of training especially when you can get much higher quality training elsewhere for free.

According to several other reviews, the creators of these bogus systems make it very difficult for you to obtain a refund, meaning if you hand over your $97 and decide you don’t really like the product then the chances of you getting your money back are very slim.

You’ve probably realized that I’ve mentioned MOBE a lot throughout this review and that’s because the focus of the Automated Millionaire system is simply to get you to buy into MOBE which probably leaves you wondering what it’s actually all about.

Basically, MOBE is a high-ticket network marketing opportunity, and it’s what’s known in the online marketing industry as a “pay to play program”.

This basically means that it’s an expensive opportunity & that you must first purchase the products yourself in order to become eligible to sell them onto other people & earn commissions.

The product line totals around $50k, so you could potentially see yourself parting with thousands of dollars before you even get moving with the program – and unfortunately, very few people who join actually go on to make any money.

So whilst MOBE is technically a legitimate opportunity, it’s at the same time a very risky one.

It’s a program that claims to be targeted at newbies but in my opinion, it’s a program for the experts to take advantage of the newbies.

Is The Automated Millionaire System a Scam?

It’s clear that this system is over-hyped & full of false promises but that’s because the creators are just doing anything they can to get people to buy-in so that they can start pitching MOBE to them in an effort to part them with their cash.

Whilst MOBE is technically a legitimate opportunity (as mentioned above) I believe that when it’s marketed in this manner it becomes like a bit of a scam. Yes, there is the potential to make money with MOBE but it’s going to take lot’s of hard work & investment – it’s certainly not going to happen overnight.

On top of that, the training which you get through the AM system is in my opinion very low quality & lacks substance. I feel like that has also been put together with the sole intention of getting you to buy into MOBE.

So as you can probably guess I am not going to be recommending this system, in fact, I’m actually going to be doing the opposite & recommending that you stay away from it. There are plenty of other genuine opportunities to make money online but this particular system is simply not one of them. It’s a thumbs down from me.